Bicycle couriers (Switzerland: Velokuriere ) are courier services that carry out small transports with the help of bicycles . They are mainly used in medium-sized and large cities , where the bicycle is one of the fastest means of transport.

Usually several self-employed bicycle couriers receive their orders from one or more headquarters, but there are also classic employment relationships. These bicycle courier services usually keep between 20% and 35% of the order value for office organization and invoicing.

The documents and small shipments with an average weight of usually less than two kilograms are usually transported in a large-volume, waterproof back pocket or special courier backpacks. But cargo bikes and bikes with trailers are also in use in some cities. Many couriers ride bicycles that they have optimized for the city according to their own ideas. Some have a single wheel or fixie, others have normal racing bikes or mountain bikes with slick tires. In addition, “ordinary” bicycles are also used.

A full-time bicycle courier covers between 50 and more than 100 kilometers for 10 to more than 35 orders per day. The energy requirement is around 6,000 kcal on average and can increase to over 12,000 kcal in winter, depending on the constitution of the driver. Full-time bike couriers often travel over 20,000 kilometers a year and therefore have a very high need for recreation.

There are now hardly any purely bicycle courier services. Most companies use motor vehicles and the networks of over-night service providers to complement and expand their offerings.

In Germany, bicycle couriers are usually self-employed . You work as a subcontractor for one or more courier centers, from which you are supplied with orders. In some customer relationships, your own invoicing or cash payment is also possible. Classic working relationships between courier and courier service are also less common.

Self-employed bicycle couriers are rare in Switzerland; most of them are employed by small and medium-sized local courier companies.

While in the years after the turn of the 20th century the courier service by bicycle was largely common, over time it was more and more replaced by motorized couriers. It was not until the mid- 1980s and in the course of the increasing congestion of the roads, the rise in energy costs and the resulting ecological awareness that bicycle couriers became interesting again for the economy.

Before the start of increasing motorization

Probably the first bicycle courier in German history was Johann Baptist Ruhdorfer from Hohenlinden . He drove to Munich and Rosenheim every day with his self-made high-speed bike , in order to get spare parts for his customers.

There is an even earlier report from San Francisco , where the "pullman rail strike" took place on July 7, 1894, a railroad strike that prevented the delivery of mail. Based on the idea of ​​a bicycle manufacturer, a bicycle courier transport chain was used to divide the entire railway line into eight areas, over which the couriers transported the goods. This event can be seen as the birth of the American "bicycle messenger".

The companies Rote Radler from Munich, Stuttgart , Freiburg and Regensburg can serve as an example of German bike courier services from the very beginning. They delivered parcels with three-wheelers around 1910 and were well known. Even today, long-established Munich residents can still remember the friendly cyclists who were known for their courageous riding style. The Rote Radler still exist today, but over the years they have developed into moving companies that no longer employ bike couriers. The deep roots of these couriers in Munich culture are evident from their occurrence in the story Der Münchner im Himmel by the writer Ludwig Thoma .

The couriers of modern times

While the bike messengers in New York were already on the road in the 1970s, the first European bike courier service in the newer sense was founded in Munich in 1985. It was the company Fahrrad Kurier München from Kurt Wolfram. In the period that followed, bicycle courier services were set up in almost all of Germany's major cities. The possibility of combining the faster and more flexible bicycle with the train as a faster and more ecological alternative between the cities was tried in the mid-1990s with the Ökourier company in Cologne and failed after a few years. The Federal Association of Bicycle Courier Services was founded in 1996 with the aim of networking individual bicycle couriers in German-speaking countries.

In the 1980s and 1990s then a certain food and clothing style that the urban development within the courier scene bicycle culture influenced and the scene more and more also a leisure scene and subculture let be. Starting from metropolises such as New York, San Francisco and London , a clearly recognizable courier style spread across the world, including in major German cities such as Berlin, Hamburg and Munich. Practical cycling clothing and weatherproof jackets are mixed with short military trousers (with practical side pockets), soccer socks and various elements of the skater , punk and hip hop culture . With regard to the wheels, a markedly minimalist style developed, which originally resulted from the need to minimize costs for the wearing parts of the wheels, but soon became an aesthetic dogma of its own for many couriers. The use of one-way bikes , or even track bikes with a fixed gear and no brakes, spread in the scene . Driving without brakes is illegal, as the German road traffic regulations require bicycles to be equipped with at least two independent brakes. In addition, handling such bikes requires some practice. Nevertheless, minimalistly equipped bikes prove to be more cost-effective in the long term than the gearshifts of conventional racing bikes and mountain bikes and are perceived by many couriers as "more stylish". Thus, many couriers have their bikes individually manufactured and / or convert them themselves, in many cities some bike shops have specialized in couriers as customers, often those shops whose owners once worked as couriers themselves. Couriers meet regularly in the vicinity of these shops, and the scene also comes together for common leisure activities such as cycling polo and alleycat races, right up to international courier championships (see below).

In the meantime, in cities such as New York and London, this style has also met with wide imitation among non-couriers and recreational drivers, so that train bikes and typical courier clothing are part of the usual street scene there.

Checkpoint at the main race during the CMWC 2008 in Eindhoven, the Netherlands.

Track stand during the German Championships of Bicycle Couriers 2007 in Frankfurt a. M.

Courier championships are occasions in which the couriers compete in various disciplines, but also serve to maintain contacts among the "messengers". The disciplines are based on the daily tasks of working as a bicycle courier. The main race ( main races ) usually resemble a orienteering and will be held on a closed course. In addition, however, there are other forms of competition: Standing on the bike balance ( Trackstand ; is with bikes with rigid transition , so-called Fixies held), as long as possible skid marks on the asphalt cart ( Trackskid ; is discharged with Fixies) or nocturnal scavenger hunts in urban areas ( Alleycat race).

The German Cycle Messenger Championships (GCMC / DMFK) have been held since 1995, were canceled in 2004, have already taken place twice with Swiss bike couriers (once in Lörrach, once in St. Gallen ) and most recently in 2019 in Duisburg.

The 5th Austrian Cycling Championship (OeRBM / ÖRBM) will take place in Linz for the first time in 2011.

The Swiss Championships, the Suisse Cycle Messenger Championships (SuiCMC) have been held annually since 1995 with the exception of 2010.
The venues were 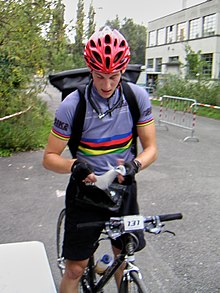 The world championships ( Cycle Messenger World Championships , CMWC) have existed since 1993
.: The venues were

The idea for the first courier world championships was picked up in the early 1990s by Achim Beier, head of the Berlin courier service Messenger-Berlin , and implemented with his own team. Around 600 participants from various countries came to Berlin for this event. In addition to the competitions and diverse cultural activities took place in the former festival center , the pump instead. This included concerts, panel discussions, and live performances by the graffiti artists Futura 2000 and Stash from New York. The most famous couriers at the time were Buffalo Bill (London), James Moore (New York) and Andy Herbst (Berlin). Numerous documentaries were made about these three couriers. A novelty to this day was that for this edition of the world championship the city center of the host city was closed for the only time and the competitors were escorted by the police during the competition. Around 100,000 spectators came to this spectacle, an unrivaled number of spectators to this day.

The CMWC 1999 in Zurich had the largest field of starters with 800 participants.