The title of this article is ambiguous. See also Lugano (disambiguation) .

The city is Switzerland 's third largest financial center after Zurich and Geneva . Since the incorporation of Pregassona (2004), then Barbengo , Carabbia and Villa Luganese in 2008 and of Bogno , Cadro , Carona , Certara , Cimadera , Sonvico and Val Colla in 2013, Lugano is the seventh largest Swiss city in terms of area, occupying ninth place in terms of population and tenth place in terms of existing jobs.

The letters LVGA in the coat of arms stand for the first letters of the place name. The city is the largest Italian-speaking political municipality outside of Italy .

The place is located in the south of the Lugano district and the canton at the mouth of the Cassarate river into Lake Lugano . As a university, congress and cultural city (especially between spring and autumn), Lugano attracts numerous visitors from Italy and from beyond the Alps.

In the statistical spatial category defined by the Swiss Federal Statistical Office , Lugano was assigned to the metropolitan region of Ticino , which was newly downgraded to a multipolar agglomeration system. This includes several agglomerations of Ticino and Lombardy with a total of over 500,000 inhabitants. It is with Como - Chiasso - Mendrisio neighboring agglomeration of the metropolitan area of Milan (Grande Milano) with around 7.5 million inhabitants. The center of Milan can be reached by car and train in around an hour.

The city center is located directly on Lake Lugano.
In the background the Monte Brè

View from Monte San Salvatore to Lugano at night

Lugano is located on Lake Lugano (in Italian: Lago di Lugano, in Italy Lago Ceresio) and is surrounded by the three panoramic mountains Monte Brè ( 925  m ) in the east, Monte San Salvatore ( 912  m ) in the west and Sighignola ( 1314  m ) (on the opposite Lakeshore), the peak of which Balcone d'Italia is already on Italian soil.

Lugano from Monte Bre seen from

Based on some archaeological finds and grave inscriptions found in the Lugano area, it can be assumed that the area around Lugano was inhabited by Leponti people. 804, 844 (copy around 1300), 854 (copy around 1300) and 875 Lugano is first mentioned in a document; the name forms were first Luanasco, then Luano . The meaning of the name is uncertain, possibly it goes back to the Latin lūcus "grove, forest".

In the Middle Ages, Lugano was affected by conflicts between Como and Milan for centuries, as these were often fought on battlefields in what is now the canton of Ticino. In the second half of the fourteenth century the city came under the rule of the Milanese Visconti . It was later occupied by French mercenaries, who in turn were driven out by the Confederates in 1513 ; since then, Lugano has been under federal rule. With the entry of French revolutionary troops into the territory of the Confederation in 1798, Ticino's status as a subject ended, and Lugano became the capital of the canton of Lugano in the Helvetic Republic for a few years . In 1803, Lugano became part of the canton of Ticino, the capital of which changed between Bellinzona , Locarno and Lugano every six years until 1878 .

Development of the urban area

Bay of Lugano Paradiso of view

In 1972 the former municipalities of Brè-Aldesago and Castagnola were incorporated into the city of Lugano.

In 2004 eight other municipalities merged with the city of Lugano: Breganzona , Cureggia , Davesco-Soragno , Gandria , Pambio-Noranco , Pazzallo , Pregassona and Viganello. As a result, both the area and the population of Lugano increased considerably.

As of April 14, 2013, the municipalities of Bogno , Cadro , Carona , Certara , Cimadera , Sonvico and Val Colla were merged with Lugano, giving the city around 3400 additional inhabitants.

Due to the cramped conditions in the urban area due to the lake and mountains, the economic development takes place today mainly outside the municipal boundaries in the Vedeggio valley.

The official language is Italian . The Ticinese dialect ( Ticinées ), a variety of Lombard , belonging to the area type Northern Italian or Padan , is on the decline; Urbanization , internal migration and tourism are seen as causes.

In the schools in Ticino, French is taught as the first foreign language and German as the second. 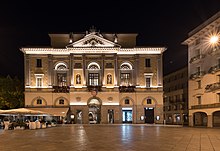 The executive branch is the city ​​council . It consists of seven members and, like the local council, is elected by the people every four years.

The townscape is classified in the inventory of protected sites in Switzerland (ISOS) as a site of national importance in Switzerland.

The Parco civico with its lush southern vegetation and the Villa Ciani are worth seeing . To the west of the park is the lake promenade, which was built in stages between 1864 and 1920 and leads to Paradiso .

Other attractions of Lugano are the two local mountains, Monte San Salvatore and Monte Brè , from which a panorama over the city, Lake Lugano and the Ticino mountains is offered. Both mountains can be reached both by train and on foot. At the foot of Monte Brè are the village of Gandria and Villa Favorita .

The medieval and early modern old town of Lugano was largely demolished or gutted on the basis of the structure plan from 1902 between 1910 and 1942 and replaced by a new city center. Therefore, only a few churches and a few secular buildings still exist from the former building structure. Besides these, the promenade Via Nassa and the Piazza della Riforma are particularly worth a visit.

Palazzi and other buildings

Only a few civil buildings remain from the former old town. The three of them bear the name of the noble family of the Riva.

Buildings that were erected as part of urban renewal include the Palazzo Primavesi (1911–1913, decorative eclectic architectural elements ), the Palazzi Gargantini (1912–1930, Neo-Baroque to Art Deco ), the Palazzina Alhambra (1926, neo-Renaissance ), the Palazzo degli Studi (1903–1904, historicism ) and the cantonal library (1937–1941, a milestone in modern architecture in Ticino) should be mentioned. One of the most important examples of cinema architecture from the 1950s is the Corso , built according to plans by Rino Tami .

North of the city center, in the Molino Nuovo district , is the monumental city cemetery, laid out between 1897 and 1899, with numerous grave monuments of outstanding artistic quality.

Tourism , finance and trade are the main pillars of Lugano's economy and secure a total of 27,000 jobs. Lugano is one of seven Swiss cities that has a casino with an A license.

Lugano is the third largest financial center in Switzerland. In addition to Banca della Svizzera Italiana BSI SA , the oldest bank in the Canton of Ticino, founded in 1873, Banca Arner , Banca Commerciale Lugano , Banca del Ceresio , Banca del Sempione and Cornèr Bank have their headquarters in Lugano. What was once the largest bank in the Canton of Ticino, the Banca del Gottardo , was also based in Lugano . In addition to the two major Swiss banks UBS and Credit Suisse , numerous other Swiss and international private banking institutions are also represented with branches in Lugano , such as Banque Cramer & Cie SA.

The raw materials trading companies Duferco , Filofibra and Interbulk Trading are also based in Lugano .

The municipality houses the studio of the Swiss radio of the Italian language RSI in Lugano-Besso and the Orchestra della Svizzera italiana (OSI), which emerged from the RSI Orchestra founded in 1935. Lugano is the seat of various independent theater groups that are active in Lugano and Ticino as well as in Switzerland and around the world. a. Teatro Pan, Markus Zohner Theater Compagnie , Teatro Sunil , Teatro delle Radici.

Internationally known is the Estival Jazz , the largest jazz event in Europe , which has been held since 1979 .

In 1956, the first edition of the Eurovision Song Contest took place in Lugano under the title Gran Premio Eurovisione della Canzone Europea . The Progetto Martha Argerich , directed by the world-famous pianist, is also famous. 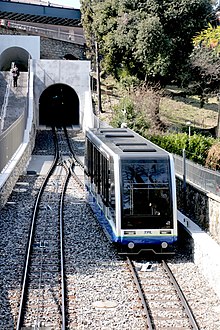 The city lies on the A2 motorway (Basel-Gotthard-Lugano-Chiasso) with two exits (No. 49 Lugano North and No. 50 Lugano South).

Four meter-gauge trams were operated in and around Lugano until the second half of the 20th century, namely the Lugano tram , the Lugano-Cadro-Dino-Bahn (LCD), the Lugano-Tesserete-Bahn (LT) and the Lugano-Ponte -Tresa-Bahn (FLP). The first three were later converted to bus operation, while the FLP was gradually expanded into a high-performance suburban railway. For the future, an underground introduction to the city center (abandoning the current end point at the SBB train station) is up for debate.

Within the city, the old, mostly single-lane tram routes were replaced by the Lugano trolleybus between 1954 and 1959 . In the 1990s, the maintenance of the trolleybuses and their infrastructure were increasingly reduced. After the Federal Office of Transport only granted temporary operating permits for parts of the vehicle fleet and linked various other conditions to the continued operation of the network, trolleybus operation was switched to diesel buses on June 30, 2001 and the electrical systems dismantled. In connection with the FLP conversion plans, the reintroduction of tram operation is also being discussed.

The Lugano – Bahnhof SBB funicular , which opened in 1886 and has been known as Sassellina since 2016 , is important for inner-city traffic and is therefore heavily frequented . It connects Piazza Cioccaro in the old town with the SBB train station . After a two-year renovation, the funicular reopened on December 11, 2016. The train overcomes a difference in altitude of 50 meters and is the most popular funicular in Switzerland.

To the west of the city is the Lugano-Agno airport , from which scheduled flights to Geneva and Zurich are operated. It is connected to the city center by train by the Lugano-Ponte-Tresa-Bahn (line S60 of the Ticino S-Bahn ), by car you can reach it in the direction of Ponte Tresa and over the hill of Sorengo (junction to Collina d ' Oro).

The Università della Svizzera italiana, founded in 1996, is located in Lugano with the faculties of communication science , economics and computer science . The architecture academy in Mendrisio belongs to the same university .

In the center of Lugano at the Università della Svizzera italiana is the Scuola Europea di Studi Avanzati in Oftalmologia (ESASO), a further training facility for ophthalmologists .

Franklin College, a private university recognized by Switzerland and the USA, is based in Lugano. His focus is on the subjects of international relations, economics and history.

In Manno there is the Università professionale della Svizzera italiana (SUPSI) and the Scuola superiore di teatro di movimento.

With the Lugano Theological Faculty founded in 1992, there is also a Philosophical-Theological College in Lugano; it mainly serves to train priests.

The following clinics are also located in the city of Lugano:

The health system in the greater Lugano area is also supplemented by the following institutions:

Personalities who worked in Lugano

→ Main article : List of sons and daughters of the city of Lugano

Political communities in the districts of Lugano East and Lugano West

Quarters of the city of Lugano