The lowest level in the three-, cantonal, four-level state administrative structure of Switzerland (federal - canton  - ( district  -) commune) are the communities referred to as political communes in many cantons . They are public corporations under cantonal law with their own legal personality .

Municipalities in Switzerland as of January 1, 2020

The tasks of the political communities are defined differently in the cantonal constitutions. After a first group “they perform all public tasks for which neither the federal government nor the canton are responsible” (KV Zurich, Art. 83), after a second “they perform the tasks assigned to them by the federal government and the canton are "(KV Bern, Art. 112), and a third group combines the autonomous with the transferred element:" The municipalities fulfill their own tasks and those assigned to them by the canton "(KV Luzern, Art. 69).

In fact, a distinction can be made between three categories of communal responsibilities: firstly, the tasks that cantonal legislation entrusts the communes to carry out; secondly, the tasks for which cantonal law only lays down the framework that the communes can fill in more or less independently; and thirdly, the municipalities can take on tasks that fall within the scope of their self-government. A direct assignment of tasks by federal law occurs only in exceptional cases, since on the one hand the federal contacts are the cantons (from which it is constituted under constitutional law) and on the other hand the municipalities are corporations under cantonal law.

The extent of communal autonomy is regulated by the respective cantonal law. In principle, the political municipalities have “general residual competence”, although this can vary widely depending on the canton. In general, one can say that church autonomy decreases from east to west; Traditionally, it is largest in the canton of Graubünden , which until the mid-19th century formed a federation of municipalities.

The organizational autonomy of the municipalities, i.e. the degree to which cantonal law specifies the structure of municipal authorities, direct democratic popular rights, etc., also differs very widely within Switzerland. It is considerable in the cantons of Zurich, Bern, Uri, Obwalden, Basel-Landschaft, Graubünden and Thurgau; particularly low in Schwyz, Freiburg, Waadt, Geneva and Jura. The organizational legal freedom granted to the municipalities by cantonal law is usually filled in by the so-called municipal regulations (in Schaffhausen and Graubünden municipal constitution, in Bern and Valais organizational regulations and in Uri municipal statutes), which require the approval of the cantonal government. In the cantons of Vaud and Geneva, on the other hand, the municipal organization is fully standardized by the cantonal legislature.

The  preamble of the European Charter of Local Self-Government - which has also been ratified by Switzerland - indicates that local authorities are one of the essential foundations of any democratic form of government and that this right can be exercised most directly at local level. She regards the protection and strengthening of local self-government as an important contribution to building a Europe based on the principles of democracy and the decentralization of power.

In the vast majority of political municipalities, whose total population is relatively modest, the municipal executive is opposed to the municipal assembly as a quasi- legislative branch in which the voting population gathers to decide on the budget, the bill and fundamental decrees. In the other, often heavily populated political communities, a community parliament (sometimes also called residents ' council) takes the place of the community assembly .

Other types of churches

Finally, another special form of communities are the parishes , which exist in all cantons and which have a large number of special features. In most of the cantons they are corporations under public law, but are no longer subject to cantonal municipal laws, but almost everywhere are regulated by regional church law. They are based on church laws passed by the canton only in the cantons of Bern and Zurich.

The modern political community is a product of the Helvetic (1798–1803). In the past, in the Middle Ages and the early modern period, the situation was more complicated: the high and the lower jurisdiction could lie with different rulers, in addition there was the economic manorial rule and possibly market rights and religious church patronage . Cities and also individual valleys could also be imperial .

In the 18th century, communities were mainly organized as user cooperatives and mayors based on personal membership. The rear passengers were residents without citizenship and therefore without any political rights. In 1798, the Helvetic Republic created municipal communities on the one hand, which included all residents of a place and not just its citizens, and on the other hand, today's civil communities , which were responsible for the administration of the previous civil goods ( community dualism ); at the same time it abolished the political prerogatives of the local citizens. The rear passengers were declared citizens of the Helvetic Republic, and voting rights were now fundamentally determined by the resident principle (from 1801, however, with increasing restrictions based on wealth or tax payments). In many cases, the territorial structure of the new municipalities followed the old parishes or traditional structures such as valleys and mountains . The exact divisions of the territories remained in the flow during the short period of the Helvetic Republic, which is why no exact number of municipalities in the Helvetic Republic can be given. The map production of this time could not keep up with the changes: The most accurate map of the Helvetic Republic was the Atlas Suisse , on a scale of 1: 120,000, published between 1796 and 1802. The sheets published before 1798 partly show municipal boundaries, the sheets that appeared after that did not in view of their great variability on it.

During the mediation period (1803-1813), the old organization based on the citizen principle was partially restored. Only during the regeneration (1830–1848) did the cantons gradually enforce the resident principle again, partly against the background of severe political disputes ( Züriputsch ). In the Federal Constitution of 1848, the freedom of establishment of all Swiss citizens was guaranteed in all cantons, but according to the principle of the place of origin , i.e. H. a voting right only in the ancestral community, not at the current place of residence. However, the cantons were free to use more modern systems.

The final repeal of old legal relationships, according to which local citizens could enjoy additional privileges compared to ordinary citizens of the political community, only took place with the total revision of the federal constitution in 1874. The revised constitution now also guaranteed voting rights at the municipal level at the place of residence. In many cantons, the civic communities continue to exist as personal corporations under public law .

Examples of mutation processes at the community level 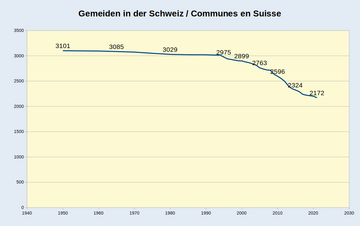 Decrease in the number of municipalities: the considerable decline from 1994/95 can be clearly seen

Many smaller communities are now forced to consider merger projects with their neighbors. Reasons for this are: functional convergence of the settlement areas, complexity of tasks / excessive demands on the authorities of small communities, lack of young talent for community authorities, insufficient political weight in the canton, from the point of view of some experts also the suboptimal size (number of inhabitants) per se. However, other experts and studies indicate point out that size alone is not decisive. Smaller communities often have an efficient, inexpensive and citizen-friendly administration (militia system) and their finances better under control.

Generous subsidies from cantonal governments, and even actual merger projects (as in Friborg and Ticino ) are an additional impetus for municipal mergers . see: Community mergers in Switzerland

On May 7, 2006, the Glarner Landsgemeinde surprisingly decided to reduce the number of municipalities from 27 to just 3 by 2011 . The government's application had envisaged a reduction to ten municipalities. This is the most radical church merger so far.

Since the Federal Statistical Office (BfS) kept the municipality register in 1960, the number of municipalities in Switzerland has been falling. However, while in the three decades from 1960 to 1990 there was only a slight reduction with a reduction from 3,095 to 3,021 municipalities, which corresponds to a decrease of 2.4 percent, the process has accelerated considerably in the recent past. In the decade from 1990 to 2000 alone, the number decreased by a further 122 municipalities, which corresponds to a decrease of 4 percent and thus almost double the decrease of the 30 years before. A further acceleration can be observed in the new millennium; in spring 2010, only 2588 municipalities could be counted. In this decade the number of municipalities fell by 303 and 10.5 percent, respectively. From January 1, 2000 to January 1, 2010, the decline was greater than in the previous 40 years.

The following table shows the exact course of the decline, with the figures from January 1st of the respective year serving as the basis:

Number of communes in the cantons

The largest municipalities are the cities of Zurich , Geneva , Basel , Bern , Lausanne and Winterthur . With a population of more than 100,000 people, they are considered large cities. St. Gallen , Lucerne , Lugano and Biel / Bienne have more than 50,000 inhabitants.

A total of 129 municipalities have more than 10,000 inhabitants and are therefore statistically classified as a city. However, some continue to refer to themselves as a “municipality” (e.g. Köniz in the canton of Bern with 37,000 inhabitants). On the other hand, there are also small towns with old town charter , but well below 10,000 inhabitants who are proud to be able to call themselves “ towns ”; However, this concept of the city is purely historical and irrelevant in modern law. (Examples: Eglisau , Kaiserstuhl , Bischofszell , Murten , Sempach or Fürstenau ). See also list of cities in Switzerland .

Various parameters show that Switzerland also has the smallest municipalities:

Size classes can also be formed according to the area of ​​the territory. From January 1, 2011 to December 31, 2014 , the largest municipality in Switzerland was Glarus Süd with 430 km², which emerged from the merger of 13 municipalities as part of the Glarus municipal reform. Since January 1, 2015, Scuol has been the largest municipality in Switzerland with an area of ​​438 km². The smallest communities with 0.32 km² are Kaiserstuhl in the canton of Aargau and Rivaz in the canton of Vaud. There is a clear correlation between sea level and area - the higher it is, the larger the municipal areas. There are most small communities in southern Ticino.

Overview of the most populous and least populous municipalities in Switzerland

Area information for the largest and smallest municipalities according to the Federal Statistical Office .