Lucerne ( abbreviation LU ; Swiss German Lozärn, French Lucerne, Italian Lucerna, Rhaeto-Romanic Lucerna ? / I ) is a German-speaking canton in Switzerland and belongs to the greater region of Central Switzerland ( Central Switzerland). The main town and at the same time the most populous place is the city of the same name Lucerne .

The canton has a share of the Central Plateau , the Pre-Alps and the Swiss Alps . Geographically speaking, most of it belongs to the Central Plateau, but does not consist of large, flat plains, but is often a hilly landscape with plains. Typical examples are the Lucerne hinterland in the northwest of the canton, the Entlebuch and the Gäu around Lake Sempach . The Brienzer Rothorn , the Pilatus massif and the Rigi massif are alpine regions in the south and east of the canton.

From the entire canton area are:

Despite its small size, there are various microclimate zones in the canton of Lucerne . In the northern part of the canton it rains significantly less than in the Napfbergland or the Pilatus region. The places at the foot of the Rigi , where tropical fruits and palm trees thrive, have a particularly mild microclimate .

The area around the city of Lucerne has a special microclimate. On the one hand, it receives plenty of rain because of the Pilatus massif (which has earned it the nickname Schüttstein of Switzerland among other Swiss people ), on the other hand, the foehn often ensures above-average temperatures in autumn and spring.

The most important rivers are the Reuss , Kleine Emme , Wigger , Luthern , Suhre , Pfaffneren and Entlen .

As of December 31, 2018, the population of the canton of Lucerne was 409,557. The population density of 274 inhabitants per square kilometer is above the Swiss average (207 inhabitants per square kilometer). The proportion of foreigners (registered residents without Swiss citizenship ) was 17.9 percent on December 31, 2015, while 24.6 percent were registered nationwide. As of December 31, 2015, the unemployment rate was 2.3 percent compared to 3.7 percent at the federal level. On April 27, 2016, the population in the canton of Lucerne reached the 400,000 mark for the first time.

The population development in the area of ​​today's canton Lucerne since 1798:

Population development in the canton of Lucerne

The canton's population grew only slightly between 1850 and 1888. At that time, many poor rural residents emigrated to industrialized regions in Switzerland and overseas. With the rise of tourism and the increased settlement of industrial companies, this then changed. The population continues to grow today. In the past, the main reason for the strong population growth was the birth surplus; today it is immigration.

In 2012, 90.4 percent of the population were German, 2.8 percent Italian and 1.7 percent French-speaking. Furthermore, English was represented with 2.9 percent.

Finally, the dialect of Schongau already points towards Freiamt. The dialect of Entlebuch tends towards Bern German in many ways, and the area of ​​the Rigigemeinden, which is a geographical exclave of the Canton of Lucerne bordering the Canton of Schwyz , can be assigned to the Schwyz dialect. The typical high Alemannic Lucerne German is spoken mainly in the greater Lucerne-Sempach-Seetal region.

Among the older resident population there are quite a few people with Hungarian, Czech, Slovak, Polish and Tibetan mother tongues (refugees who entered the country between 1939 and 1969). Other larger linguistic minorities speak Albanian, Serbo-Croatian, Greek, Dutch, Swedish, Kurdish, Vietnamese, Arabic, Somal and Tamil.

Since the 2000 census (except for the Roman Catholic and Evangelical Reformed Church), there are no more precise figures on the religious affiliation of the total population in the canton. However, the Federal Statistical Office (FSO) carries out sample surveys in which other religious communities in the canton are also recorded. In the 2017 survey, 3/4 of all respondents aged 15 and over in the canton of Lucerne admitted to a Christian denomination, while 1/4 professed to another or no religion. However, if the nationality or origin of the respondents are taken into account, the survey shows a much more differentiated picture:

During the Reformation, writings of the Anabaptist and Reformed directions reached the area of ​​the Catholic canton of Lucerne and led to the conversion of individuals. However, the government stepped in vigorously and suppressed the Reformation with executions and expulsions. In the Middle Ages there was at times a Jewish community; Pogroms and finally the expulsion of the remaining Jews put an end to it. That is why the canton remained purely Catholic until the 19th century.

Reformed people settled in the canton from the early 19th century. Reformed services have been held in Lucerne's Peterskapelle since 1826. Increased immigration began in 1848 when freedom of establishment was introduced in the new federal state of Switzerland. Reformed and Jewish communities emerged and - through the split from the Roman Catholic Church - the Christian Catholic (Old Catholic) community.

Nevertheless, the canton remained Catholic until after the Second World War - apart from a steadily growing minority of Protestants - as the following table shows:

Since 1960, however, a profound change has taken place. In the 1960s, Orthodox Christians immigrated from Yugoslavia and Greece and Muslims from Yugoslavia. Since then, the Roman Catholic population has decreased from 85.2 percent (1970) to 70.9 percent (2000) (despite the strong immigration of Catholic southern Europeans).

Over 90 percent of Muslims are Bosniaks, Albanians, Turks or Kurds. The Orthodox Christians come almost entirely from south-east Europe. Among the other religions, Hinduism and Buddhism are important. The Hindus are almost exclusively Tamils ​​from Sri Lanka. The Buddhists fall into two groups: on the one hand there are immigrants from Southeast and East Asia (Vietnam, Cambodia, China, Tibet etc.), on the other hand they are native converts.

The cantonal constitution recognizes the Roman Catholic, the Protestant Reformed and the Christian Catholic regional churches as corporations under public law.

The new constitution of the Canton of Lucerne from 2007 came into force on January 1, 2008. The state constitution of January 29, 1875 was previously in force and has since been partially revised over 40 times.

The last constitutional revision was a lengthy process. A group from the Cantonal Council drew up a draft. Interested groups could take part in the consultation process until the end of 2004. The Grand Council of the Canton (today the Cantonal Council) passed the draft of the new constitution on January 30, 2007 with 70 to 45 votes. In the referendum of June 17, 2007, the constitution was adopted with 51,273 votes to 29,137 with a participation of 34.31 percent; it came into force on January 1, 2008.

The legislative body ( legislature ) is the 120-member Cantonal Council ( called the Grand Council until 2007 ), which is elected by the people on the basis of proportional representation.

The people who are entitled to vote and vote take part in legislation through direct democratic means. 5000 eligible voters can apply for a total or partial revision of the constitution ( constitutional initiative ), 4000 eligible voters for the enactment, amendment or repeal of a law ( legislative initiative ). It is imperative that constitutional amendments as well as laws and resolutions of the cantonal council that entail expenditure of more than 25 million francs ( mandatory referendum ), other laws and expenses between 3 and 25 million francs at the request of 3,000 voters or a quarter of the municipalities are submitted to the referendum ( optional referendum ).

The executive body ( executive ) is a five-member government council elected by the population with voting and voting rights according to the majority vote .

Like his deputy, the chairman of the government council is elected for one year and acts as a “ primus inter pares ”. Until 2007, his official title was « mayor », that of his deputy « governor ». Since January 1, 2008, the chairman has been using the official title of “District President”. Lukas Gresch-Brunner (independent) has held the office of state clerk since 2012.

The cantonal court acts as the judicial body ( judiciary ) as the highest court in Lucerne . It was formed in 2013 from the previous higher court and the previous administrative court.

The courts of first instance for civil and criminal matters are designated by law. These are the district courts ( called district courts until 2007 ), the criminal, labor, juvenile and compulsory measures courts . In many cases, the first instance is preceded by the arbitration authorities who try to persuade the parties to an amicable solution.

See also : Municipalities of the Canton of Lucerne 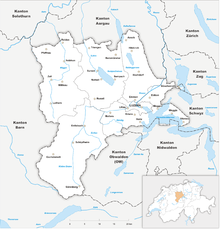 Cities and towns in the canton of Lucerne

The political communities of the canton of Lucerne are public-law local authorities. They perform their own tasks and those assigned to them by the canton. The municipalities give themselves a democratic organization and lay down its basic features in a municipal code. Their autonomy is guaranteed by the cantonal constitution.

Of the total of 83 political municipalities, those with more than 9,000 inhabitants as of December 31, 2018 are listed below: 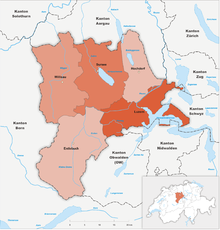 Offices of the Canton of Lucerne

For a long time, the canton of Lucerne was divided into five offices ( called districts in other cantons ). They are no longer mentioned in the new cantonal constitution of 2007, so they no longer have any administrative tasks.

After the enactment of the new cantonal constitution, constituencies and judicial districts that only partially correspond to the old offices have been replaced by the offices.

Constituencies of the Canton of Lucerne since January 1, 2013

The canton of Lucerne has six constituencies .

For jurisdiction in the first instance, which is exercised by the district courts, the canton is divided into four judicial districts : 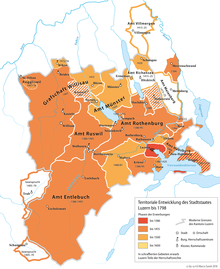 Map of the territorial development of the Lucerne city-state until 1798
→ Main article : History of the Canton of Lucerne

During the Neolithic Age , the first people settled in what is now the canton. Between 800 and 300 BC Celts immigrated to Central Switzerland. Around 15 BC The region was conquered by the Romans and integrated into the Roman Empire .

In the 6th century, Germanic Alemanni took over Central Switzerland after the fall of the Roman Empire. The first monasteries and monasteries emerged. Luceria was founded in 750 , from which the future city of Lucerne developed. Around 1290, King Rudolf I of Habsburg named the city of Lucerne an Austrian country town. In 1332, Lucerne made an alliance with the so-called Waldstätten Uri , Schwyz and Unterwalden . With their help, Lucerne freed itself from the rule of the Habsburgs in the Battle of Sempach in 1386 . The current borders of the canton correspond roughly to the extent at that time.

After the French invaded in 1798, the Helvetic Republic , a unitary state based on the French model, was proclaimed, and Lucerne temporarily lost its independence. In 1803 Napoleon introduced the mediation constitution , which granted the cantons a certain degree of sovereignty. In 1814, at the beginning of the restoration period , after the collapse of power of Emperor Napoleon, the prerogatives of the aristocracy were partially restored. Lucerne was a sovereign state in a loose confederation. In 1848, after the Sonderbund War, the Swiss federal state was founded.