View of the Bavarian foothills of the Alps with pronounced southern foehn. Taken approx. 20 km east of Regensburg , with a visibility of around 200 kilometers. The Danube valley forms a natural border for the alpine foehn.

As Alpenföhn is Föhnwind the Alpine region designated. The term “foehn” was initially used for the thaw on the north side of the Alps in the winter months and blowing from the south. Since this name later became the generic term for this phenomenon, which occurs in many mountains around the world, the expression "Alpenföhn" is also used to differentiate between the foehn in the Alpine region. Here it can lead to strong storms with top speeds of 150  km / h ( hurricane strength ). The blowing from the south hairdryer on the north side of the Alps is also south foehn called its counterpart south of the Alps and north foehn .

Foehn locations are known for their warm air and also for their unusual cloud and atmospheric appearance.

Foehn in the north of the Alps

A significant proportion of foehn days show no precipitation south of the Alpine ridge, so that the thermodynamic foehn theory in the case of the alpine foehn cannot serve as an explanation for the warming. However, the foehn phenomenon on the north side of the Alps can be explained by the fact that the air, which can be felt as foehn in the northern Alpine valleys, does not come from the southern foot of the Alps, but from greater heights, with the underlying windward air being stably stratified and prevented from climbing over the obstacle becomes. Through the deeply cut passes, part of this relatively cool, blocked windward air reaches the north as a shallow foehn. In Switzerland, on the other hand, the term foehn is only used when referring to a clearly warm downward wind, which is created by the additional heat of condensation (thermal energy) when it rains on the south side of the Alps (north side of the Alps at northern foehn).

The foehn-like high-altitude currents must also be demarcated , which are mostly large-scale Central Atlantic-African air masses transported from southwest to south, which lead to exceptionally warm conditions north of the Alps even at low wind speeds. Triggers are mostly slow moving to blocked Atlantic lows in the area of ​​the British Isles and the North Sea, which carry the air radially on their front, i.e. the cold front . In particularly extreme conditions, however, the valley foehn can also occur. They are like a hairdryer in that the moisture they carry with them often rains down on the Pyrenees or in the French Alps . These southerly winds can, for example, bring Saharan dust into the Alps.

From a real foehn situation, there are clear temperature differences of well over 10 degrees Celsius , which can only be explained by foehn  , which distinguish the foehn areas from their immediate vicinity, especially in high fog . With a hair dryer, the temperature can rise or fall by up to 25 degrees Celsius . Föhn is also responsible for a number of high temperatures in winter.

On the north side of the Alps, the foehn is associated with very good visibility due to the low humidity . In winter and spring , the dry air and the high temperature favor snowmelt.

Foehn in the south of the Alps

In reverse pressure conditions, the northern foehn occurs on the south side of the Alps, known as Tramontana or Tedesco ("the German") in the Italian-speaking region . The effects are not exactly symmetrical because north air has different properties than south air. North foehn results in cloud cover with rain in the north, foehn windows with possibly increased temperatures in the south. In contrast to the foehn north of the Alps, the northern foehn will often show itself as a relatively cold storm, as this wind situation usually occurs after a cold front has passed from the west.

Synoptic of the alpine foehn 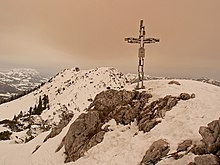 Summit of the Hörndlwand on February 21, 2004. An extreme foehn weather with wind peaks of up to 150 km / h in connection with a severe storm in North Africa makes the sky in the Alps red-colored by desert dust.

Südföhn can occur in a cyclonic or anticyclonic form. With the cyclonic type, a rain event can also be observed on the windward side. A necessary condition for the triggering of cyclonic southern alpine foehn is the passage of a low pressure area on west-east orbit north of the Alps . This sucks in air from its surroundings in the lower layers, i.e. also across the Alps, which can then lead to foehn. Similar large-scale weather conditions exist when observing the foehn in all parts of the world.

The southern foehn often arises in advance of a cold front approaching the Alps from the west. If, behind the front, cold air that reaches far enough south over Western Europe breaks out, a north-facing current is often created on the front of this cold air trough to compensate, which leads relatively mild, but also quite humid air from the Mediterranean to the Alps.

Another special case are the Italian lows, that is, the Mediterranean lows that move eastward south of the Alps and sometimes get caught in the Alpine arc. On their front, these lead warm African air masses over the Mediterranean, where they absorb moisture, and as a result, large amounts of precipitation against the southern side of the Alps. With strong Mediterranean lows, these air masses beat over the main Alpine ridge and this also leads to warm, dry winds similar to foehns on the north side of the Alps. In contrast to the Föhn in the strict sense of the word, the low pressure area is here to the south, not north of the Alps, i.e. in the direction from which the southern foehn comes.

An evaluation of statistical data (for Innsbruck and Bolzano) has shown that there must be a pressure difference of about 4 hPa between the two sides of the Alps for the  foehn to occur and about 8 hPa for the foehn to penetrate the valleys.

The Föhnfenster north of the Alps of Freising seen from

Clouds over the main Alpine ridge at Nordföhn, view of the south side of the Zillertal Alps (the foehn wall on the windward side of the foehn window)
→ Main article : Föhntal

Predestined Swiss Alpine valleys for Südföhn are the Reuss valley in the canton of Uri , the Haslital in the canton of Bern and the Alpine Rhine valley , in the eastern Alps the Inn valley and the Salzach valley , and the valleys of the Salzkammergut (Trauntal and side valleys). To the east of this, the Alps split into several chains without an explicit main ridge, so that the foehn is no longer as strong. The Carinthian Jauk (from Slovenian jug 'south') over the Karawanken should be mentioned here.

The area in which the foehn affects in Upper Swabia , Bavaria and Upper Austria in the foothills of the Alps can be delimited almost exactly with the course of the Danube .

As a special phenomenon there is, for example, the Guggi hair dryer . Here, the wind blows from the south-east from the Jungfrau into the valley towards the Lauberhorn and often reaches hurricane strength there.

Conversely, the north foehn turns towards the east end of the Alps to the north-west, so it falls through the Liesing-Paltental furrow and the Mur breakthrough from the north-east to Graz and the Styrian Bay . On the northeastern edge, the Vienna Woods , it falls as a west-northwest foehn over Vienna into the Vienna Basin .

West winds can lead to the emergence of the west wind. The Hörnliföhn leads to temperature rises of up to 5 degrees Celsius in the lower Toggenburg .

The southern foehn in particular can reach enormous wind strengths, especially when the weather-effective systems themselves represent extreme events. For example, the foehn storm triggered by the approaching hurricane Dirk in December 2013 in Gütsch or Andermatt measured 208 km / h at 2287 m, or 181 km / h during hurricane Lothar in Brienz in 1999 . When the foehn storm in November 2014 , Titlis and Gütsch as well as the Tyrolean Patscherkofel reported over 180 km / h. In such cases one speaks of Föhnorkan .

In the exceptionally mild winter of 2013/14, the Patscherkofel, which primarily experiences southern storms due to its location, recorded around 30 days with storms from southern directions over 100 km / h. During this time, lows were almost continuously over the British Isles , which caused these foehn layers. It was the wettest winter there since weather measurements began.

The term Dimmerföhn (to, dim ') refers to a Föhnereignis that with cloudy, hazy connected or even wet weather. This rare event occurs when the current is so strong that it hits the Föhn valleys immediately behind the main Alpine ridge and only leads to the cleared Föhn window at the edge of the Alps. Then there is also precipitation in the lee. The phenomenon is known from Glarus and the Innsbruck area.

On December 13, 1981, a very rare phenomenon occurred over the Swiss Alpine region: the double hair dryer. For around four hours, the southern foehn winded in Altdorf (Uri) and the northern foehn wind in Locarno (Ticino) simultaneously, which is not possible according to the standard models of the foehn theory . The foehn researcher Karl Frey analyzed and documented this phenomenon on the basis of the extensive meteorological data.