The title of this article is ambiguous. Further meanings are listed under Winter (disambiguation) .

Snow cover over the course of the year on our earth

The winter (from Old High German wintar , recyclable as gothic wintrus a Germanic root; .. Etymologically unclear (s u) , including an origin were suspected earlier of Indo UI "shine" ṷed- "moisten flow" and kinship with "water" as “the flowing” as well as a connection with a root with the meaning “white”) is the coldest of the four seasons in the subtropical , temperate , subpolar and arctic climatic zones of the earth. Depending on whether it is in the northern or southern hemisphere , one speaks of northern winter or southern winter . The northern winter takes place simultaneously with the southern summer.

The seasons arise because the earth's rotation does not take place in the plane of the orbit around the sun, but inclined by 23.4 ° (see ecliptic inclination ). As a result, the south and north poles lie alternately in the grazing sunlight for half a year, and the zenith of the sun changes in the annual cycle between the southern and northern tropic .

Beginning of winter and duration 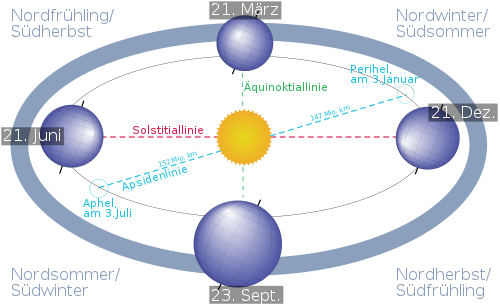 Astronomically or in terms of calendar, winter begins with the winter solstice - the point in time when the sun is vertically above the tropic of the other half of the earth and the days are the shortest:

Then the days get longer again and the nights get shorter. Winter ends with the equinox of spring on

Since the earth's orbit around the sun is slightly elliptical, i. H. deviates from an exact circular path by 1.7%, the four seasons are not exactly the same length. The northern winters are slightly shorter and milder than the southern winters because of the closeness to the sun ( perihelion on January 3rd).

In meteorology , the beginning of (northern) winter is set on December 1st . It therefore includes the months of December, January and February.

Phenologically , the beginning of winter can differ considerably from the astronomical one and, in addition to the land-sea distribution ( maritime vs. continental climate ), is often marked by the beginning of a permanent snow cover . The increase or decrease of glaciers depends less on the winter snow conditions than on the first fresh snow in autumn , which inhibits ablation .

In the Alps , the festival “ Presentation of the Lord ” (popularly “Mariä Lichtmess”) on February 2nd is a statistical “ Lost Day ” for the weather in late winter. The saying “When it storms and snows at Candlemas, spring is never far” is well known. With the same meaning, but formulated the other way around , there is also the farmer's rule : "If the badger sundays himself during the week of light measurement, he stays in his hole for another 4 weeks!"

Approached dividing the winter in the northern hemisphere the months December , January and February to and in the southern hemisphere the June , July and August . The “ polar night ” prevails in the geographic poles for six months ; near the polar circles it lasts from a few days to weeks.

In the energy industry, the winter is defined as the winter half-year from October 1st to March 31st, because of the higher energy demand then, in deviation from the seasonal definitions.

Weather patterns and their influence on winter weather 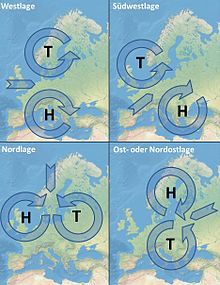 In Germany in particular, winters have been wetter and milder for over two decades. According to earlier climate forecasts, this trend will continue. According to more recent studies, however, paradoxically, the ice melt at the North Pole due to global warming favors the formation of high pressure areas over Eurasia , so that more severe winters are expected here in the future, such as the snowfall in Central Europe in January 2019 . In the winter of 2019/20 no ice wine could be produced in Germany for the first time .

As in summer, there are also old customs in winter, some of which have survived or have been revived: for example, the solstice as Christmas , Alban Arthuan (Celtic), Yule Festival (Nordic / Germanic), Yalda night (Iranian), Carnival / Shrovetide / Carnival , masked ball , winter burning and Perchten run . Numerous writers and poets addressed the peculiarities of winter and the feelings and sensations it triggered.

The word winter is a Germanic "special word": it is found similarly in all Germanic languages, but nowhere else:

Further chose LL Zamenhof for Esperanto Vintró as a designation for the winter from; In addition to somero , this is one of two names of the seasons in this planned language , which is not of Romance, but of Germanic origin.

The original meaning of the word, for which the ancient Germanic form * wintru can be reconstructed, is unclear; Although there is no lack of suggestions as to how it can be derived etymologically , these are mostly assessed as unconvincing in the relevant overview works. The assumption already made by Adelung (1786) that winter is derived from the wind - or from germ. * Windaz <idg. * U̯ē-nto-s ; see. lat. ventus - hardly finds advocates since Friedrich Kluge (1882) decided that germ. * wintru- and * windo do not go along with each other. The German dictionary (Volume XIV, II, 1960) and the Indo-Germanic etymological dictionary by Julius Pokorny (1959) favor the view already advocated by August Fick (1870) that winter ultimately flows onto the root * u̯ed- “ springs ; wetting, moistening ”, more precisely to a root expansion with Nasalinfix , as it is also present in Lithuanian vanduõ “ water ”and Latin unda “ wave, wave ”, as Evald Lidén (1889) and Herbert Petersson (1912) worked out. Against this reconstruction, which is also morphologically not unproblematic, it has often been objected that "the wet time" or " rainy season " does not seem particularly plausible as a naming motif, since rain and moisture can hardly be considered the most prominent characteristics of winter, also and especially not in the original home of the Teutons. Christianus Cornelis Uhlenbeck (1905), like Kluge before, did not want to completely rule out the older assumption that the Germanic * wintru is more related to Celtic * windo "white", which resulted in Welsh gwynn and Irish finn and in Central Europe in Celtic place names such as Vindobona ( Vienna ) encountered; however, an equivalent to this Celtic etymon has not yet been found in any Germanic language . Anatoly Liberman (2012) therefore considers this hypothesis to be as far-fetched as the efforts of Terje Mathiassen (1968) to link Germ. * Wintru with Slavic * wed- "wither, pass away". In contrast, Fritz Mezger's attempt (1960) to etymologically reconcile Gothic wintrus with Old Norse vinstri "links" (cf. ahd. Winistar , aengl . Winstre , etc. <Germanic * wenistraz "links") seems promising to him. Like the Celt, the Teutons also orientated themselves in the cosmos with a line of sight to the rising sun, and on the left is the north , the home of winter (cf. Old Irish túath , which means both “left” and “north”; German is north in turn probably originally related to Umbrian nertru "left").

In all other branches of the Indo-European language family, however, the name of the cold season is derived from a typical root word * ǵʰey- ; so this applies to:

as well as for the extinct Tocharian, Anatolian (Hittite gi-ma-an ) and Italian (Latin hiems ) languages. In the Romance languages that emerged from Latin , the word for "winter" is not derived directly from Latin hiems , but from the associated adjective hībernus "winterly": Italian and Portuguese inverno , Spanish invierno , Catalan invern , French hiver , Romanian iarnă . For idg. * Ǵʰey- an independent meaning "winter" is assumed; Pokorny also names the meaning “snow”, since the Greek χιών 'khiṓn' and Armenian ձիւն 'dzjun' 'snow' are derived from this root and Sanskrit 'himá' was also used in this sense (cf. Himalaya , actually the “ Heimstatt des Schnees ”), but this is likely to represent a secondary, i.e. derived, meaning, especially since * sneygʷʰ is a generally accepted root word for“ snow ”.

It should be noted that the Indo-Europeans only differentiated between two seasons. This should also still apply to the Teutons of antiquity, even if Tacitus reports in Germania around the year 100 that they knew not two but three seasons, namely winter, spring and summer, but had no term for autumn: 'unde annum quoque ipsum non in totidem digerunt species: hiems et ver et aestas intellectum ac vocabula habent, autumni perinde nomen ac bona ignorantur ' . The quarter division of the year, which is familiar to Tacitus and is still common today, can only be read in the Hippocratic script De diaeta and remained limited to the Greco-Roman culture for centuries. The fact that autumn and probably also spring were later innovations in the Germanic annual cycle brought about by Roman influence is confirmed by Beda , who explains in De temporum ratione (around 725) that, like the elements and temperaments , there are also four seasons, but also writes that the Anglo-Saxons have always distinguished between summer and winter: 'Antiqui autem Anglorum populi […] principaliter annum totum in duo tempora, hyemis, videlicet, et aestatis dispartiebant, sex illos menses quibus longiores noctibus dies sunt aestati tribuendo, sex reliquos hyemi ' . Beda also writes that October is called Wintirfylleth for them , since winter begins with the first full moon of this month - a possible parallel to this can be found in the Celtic, more precisely Gallic, calendar of Coligny , dated to the late 2nd century , in which six each of the twelve months are bundled into two half-years, with the Samon [* ios] (in Irish sam "summer" and samhain ?) the beginning - or the middle - of the one, the Giamon [* ios] (in Irish gam <idg . * ǵʰey- "Winter"?) marks that of the other half of the year. The old Icelandic calendar , the Misseristal , only differentiates between two seasons or half years ( misseri ). In the Anglo-Saxon Chronicle , "autumn" is only mentioned in the entry for the year 1051, and not once about spring. The fact that winter and summer must be regarded as hyperonyms is also shown by the fact that the names of spring and autumn, in contrast to those of the two “main seasons”, are not represented uniformly in the Germanic languages ​​(cf. German spring versus English spring and Swedish . vår ), sometimes even several terms compete in one language (German spring , spring and spring ; English autumn and fall ); for the Gothic there are no terms for the “secondary seasons” at all. The fact that summer and winter are a complementary pair of terms is shown not least by their word form: they are not only spoken of as homoioteleutons in German (cf. Irish sam and gam or also Welsh haf and geaf ) and appear as such in some old Germanic poems , so in Heliand ( 'he habda at them wîha sô filu wintrô endi sumarô' ) and in the Hildebrandslied ( 'in wallota sumaro enti wintro sehstic ur lante' ).