The title of this article is ambiguous. Further meanings are listed under August (disambiguation) . 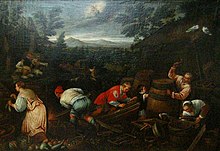 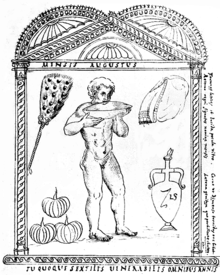 The month of August in the chronograph of 354 by the late antique calligrapher Filocalus . 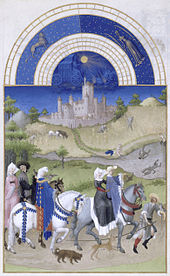 Monthly picture August from the Très Riches Heures . It shows an elegant company going out on a falcon hunt . The long pole that the falconer carries with him served to frighten the prey birds.

The August (Harvest month, ears month, sickle month, Ernting; Latin augustus ) is the eighth month of the year in the Gregorian calendar .

August has 31 days and was in the year 8 BC. Named after the Roman emperor Augustus , since he took up his first consulate this month . Under Emperor Commodus the name of the month was changed to Commodus in his honor , after the death of the emperor the month got its old name back. 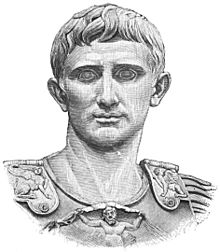 In the Roman calendar was Augustus originally the sixth month and had before its renaming the name Sextilis (lat. Sextus , the sixth '). In 153 BC However, the beginning of the year was moved to January 1st .

The sextile originally had 29 days and got 31 days through Julius Caesar's reform. The order of the number of days in the following months September , October , November and December (31 and 30 days) was reversed, as otherwise three months (July to September) with 31 days each would have followed one another. Under Emperor Augustus, the month of Sextilis was renamed Augustus in honor of the emperor. The often heard claim that the month of August was only 30 days long in Caesar's original reform calendar and that it was only extended to 31 days in order not to lag behind the month of July, which is named after Julius Caesar, has proven to be a legend.

The National Day on August 1, is a Swiss national day is a public holiday.

Assumption of Mary on August 15 is a public holiday in all of Austria, in some cantons of Switzerland, in Saarland and in the predominantly Catholic parishes of Bavaria. As a national holiday, it is also the national holiday of Liechtenstein.

In addition, the peace festival on August 8th is a public holiday in the city of Augsburg. In the rest of German-speaking countries, August does not have any public holidays.

Wikisource: August  - Sources and full texts
Months of the Julian and Gregorian calendar