The title of this article is ambiguous. Further meanings are listed under April (disambiguation) .

The April (from the Latin Aprilis ) is the fourth month of the year in the Gregorian calendar . It has 30 days and begins on the same day of the week as July and, in leap years, also as January . In the Roman calendar Aprilis was originally the second month because the new agricultural (but also military) year began with the end of winter in March.

There is no reliable derivation of the name. Since the names of the first half of the year reflect gods, it could have come from Aphrodite , who as the goddess of love would suit April, even if the Roman name had been Venus . The name possibly also refers to the buds that open in spring and, like the vegetation-related interpretation of April as “the month that opens the earth”, would then be derived from the Latin aperire (“open”). Another etymology sees apricus ("sunny") as the origin of the word. During the reign of Emperor Nero , the month was renamed Neroneus in his honor , but this did not prevail. Under Emperor Commodus , the month was then called Pius , one of the emperor's names, and this renaming was also reversed after his death. The old German name, which was introduced by Charlemagne in the 8th century, is Ostermond , later also called Easter month, because Easter is usually in April. Other names that are hardly used today are changing month , grass moon or launing .

According to legend, Lucifer was cast out of heaven on April 1st. 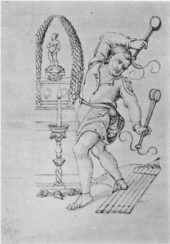 The month of April in the chronograph of 354 by the late antique calligrapher Filocalus .

Since the 16th century there has been evidence in Europe of the custom of celebrating an April Fool's joke on April 1st , by sending people “into April” with a more or less rough joke or a story of lies. This is where the following two proverbs come from:

"On April 1st you send the fool wherever you want."

"In April, everyone does what they want."

April weather figuratively stands for changeable weather, even if it takes place in other months:

"April, April - he does what he wants"

April in the poem

Numerous authors have dedicated poems to the month of April. 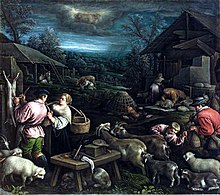