The title of this article is ambiguous. Further meanings are listed under June (disambiguation) . 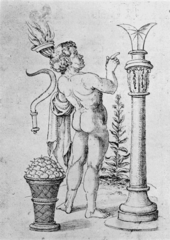 June in the chronograph of 354 by the late antique calligrapher Filocalus .

The June (formerly fallow month ) is the sixth month of the year in the Gregorian calendar .

It has 30 days and contains the day of the solstice (June 21, depending on the celestial mechanics also possible on June 20 or 22), which is the longest day with the shortest night of the year in the northern hemisphere. It is named after the Roman goddess Juno , the wife of the god Jupiter , goddess of marriage and protector of Rome. During the reign of Emperor Nero , the month was renamed Germanicus , one of the emperor's names, but this did not prevail. Under Emperor Commodus , the month was then called Aelius after one of his names; this renaming was also reversed after the death of the emperor.

The old German name of the month is Brachet or Brachmond , since in the three-field economy of the Middle Ages the cultivation of the fallow began in this month . In gardeners circles this is described as Rose months , as the rose bloom in June reached its peak; for this reason June was formerly called the Rose Moon. In the Roman calendar , Junius was originally the fourth month and had 29 days.

To in oral communication confusion with the similar-sounding names of the months July , particularly in - to avoid the June, phone conversation or the diktat - often referred to as "Juno" ([ Juno ] or [ Juno spoken]). For the same reason, July is often articulated as "Julei" ([ juˈlai ] or [ ˈjuːlai ]).

June does not have any fixed public holidays in German-speaking countries. Of the movable ones, Ascension Day falls in rare cases , but more often Pentecost and Corpus Christi fall in June. The summer solstice and St. John's Day are celebrated in many areas . More Holidays and Observances see Category List (Holidays) and list of commemoration and action days # June .