This article is about the month of October. For the silent film of the same name, see October (film) .

The October is the tenth month of the year in the Gregorian calendar . He has 31 days . In the Middle Ages, October was considered a holy month in which people preferred to marry; Kings also usually marry in October. In the countries in which the time is changed from summer time to standard time in October, October is the longest month of the year. Except in leap years , October begins on the same day of the week as January .

The Romans called their eighth month of the year mensis october ( Latin octo = eight). Although the month after the Julian calendar reform 46 BC BC was moved to the tenth place, it stayed with its Roman name. This is sometimes overlooked when transferring previously used Latin dates (“ 10ber ” & “8ber”). During the reign of Emperor Tiberius , the Senate suggested that October be renamed Livy after his mother Livia Drusilla , but the emperor refused to avoid having to accept equality with his mother. During the reign of Emperor Domitian , the month was then renamed Domitianus , which, unlike July and August, did not prevail. At the beginning of the reign of Antoninus Pius , the Senate again proposed that October be renamed Faustinus after the name of his wife Annia Galeria Faustina , but the emperor refused. Under Emperor Commodus , the month was then called Hercule (u) s , after the Greek demigod Heracles , and this renaming was also reversed after the emperor's death.

Other old German names are wine month - this name should already by Charlemagne in the 8th century have been introduced and has the start of the vintage and the other wine processing through - or the old German name Gilbhart , composed gilb for the yellowing of the leaves and hard compounded for a lot. In general, it is often referred to as Golden October because of the beginning of the discoloration of the leaves . In the hunter's language , October is also called badger moon. 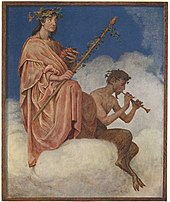 In October are the zodiac signs Libra (September 24th to October 23rd) and Scorpio (October 24th to November 22nd).