This article deals with the all-German public holiday on October 3rd. For former German Unity Day on June 17, see below #Bundesrepublik Germany and riot June 17, 1953 # Federal Republic of Germany . 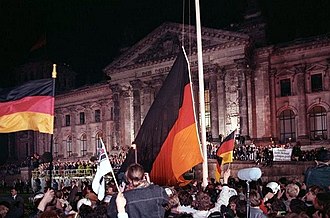 On the night of October 2nd to 3rd, 1990, at midnight, the unit's flag was hoisted on a large flagpole in front of the Reichstag building .

The October 3 was the Day of German Unity in the Unification Treaty 1990 for public holiday in Germany determined. As the German national holiday , it commemorates German reunification , which "was" completed "when the accession of the German Democratic Republic to the Federal Republic of Germany [...] took effect on October 3, 1990". Thus Brandenburg , Mecklenburg-Western Pomerania , Saxony , Saxony-Anhalt and Thuringia as well as Berlin in its entirety became the new states of theFederal Republic of Germany .

Historically, since the early 19th century, “ German unity ” has been used to describe the endeavor to unite the German states in one state. The unity motif can also be found in the German national anthem as " unity ".

History of the German National Holidays

Before 1871, the various days of coronation were mainly commemorated in the individual German states and regions . After the unification of Germany - the unification of the empire in 1870 ( Kaiserbrief ) and the founding of the empire as an empire in 1871, no general national holiday was set. However, Sedan Day was celebrated every year on September 2 , on which the main French army had surrendered in the Franco-Prussian War in 1870 . However, Kaiser Wilhelm I never approved it as an official holiday.

After the founding of the empire in 1871, demands arose for a national day of remembrance, but no decision was made between three proposals. By 1873, Sedan Day gradually prevailed against January 18, 1871, or the day of the Frankfurt Peace Treaty (May 10, 1871). Sedan Day was soon also celebrated at universities , and in many German towns the war memorial was inaugurated at the beginning of September . Nevertheless, it never had the meaning of the "Kaiser Parade" or the Emperor's birthday . Some state ministries of culture, such as the Prussian one , therefore decided to celebrate Sedan Day as an official festival day in schools. Wilhelm I had rejected the most frequently cited proposal to set the date of the imperial proclamation on January 18 as a day of remembrance : It was also the anniversary of the first Prussian coronation ( January 18, 1701 ); this should not fall into the shadow of an all-German holiday.

Some concerns about the predominance of the military component diminished as civilian celebrations increased and a religious argument was made for Sedan Day. Pastor Friedrich von Bodelschwingh proposed Sedan Day as a national festival at the annual meeting of the Rhenish-Westphalian Provincial Committee for Inner Mission in the summer of 1871 on the grounds that “on September 2nd (...) the hand of the living God intervened so visibly and vigorously in history "Have" that it will be easiest for the people to remember on this day of remembrance how great things the Lord has done for us ". As a result, “typically German” festivals and parades were conceived, which began on the eve of September 2nd with bells, bonfires and patriotic songs and in some places had the character of peace festivals . 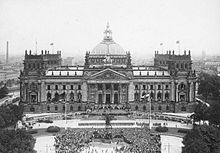 On July 31, 1919, the Weimar Constitution was adopted in its final form by the Weimar National Assembly . To commemorate the “birth of democracy”, August 11th was set as the constitutional day of the national holiday, because on this day Reich President Friedrich Ebert signed the constitution.

Shortly after the takeover of the NSDAP the German government said on April 10, 1933 May Day to the holiday of national labor , the "applicable for New Year's richest and national law" were to be applied. The law on public holidays of February 27, 1934 then stipulated: "The national holiday of the German people is May 1st."

From 1954 to 1990, June 17 was a public holiday in the Federal Republic of Germany to commemorate the 1953 popular uprising in the GDR, called the Day of German Unity (with a small "d"). On June 11, 1963, the Federal President Heinrich Lübke proclaimed it to be a national day of remembrance for the German people . The law was repealed by the Unification Treaty, but the proclamation remained valid. On June 17th, the highest federal authorities and their business areas as well as the corporations, institutions and foundations under public law that are subject to the supervision of federal authorities will be flagged. In the year of reunification , there was German Unity Day on June 17, 1990 and German Unity Day (with a capital "D") on October 3, 1990.

Reunification as a new reference date 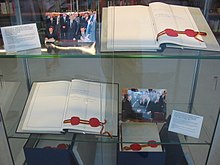 After the fall of the Wall , November 9th, the day the Wall fell in 1989, was originally discussed as a national holiday. Because the date was the same as the 1938 Reichspogromnacht , this date was considered unsuitable (see also November 9 (Germany) ). Article 2 of the Unification Treaty declared October 3rd as a (new) "Day of German Unity" (now with a capital "D") to be a public holiday. It is the only public holiday under federal law . All other holidays are based on the laws of the federal states.

Embedding the date in political events in 1990

The reason for the decision of the People's Chamber to be set for October 3rd was the quickest possible establishment of unity after the conclusion of the treaties, especially under the impression of an impending economic and political collapse of the GDR. October 3, 1990, a Wednesday, was the earliest possible date after the CSCE Foreign Ministers' Conference on October 2, when these Foreign Ministers were to be informed of the outcome of the two-plus-four negotiations .

At the beginning of July, the governments of the two German states had decided on a schedule that provided for state elections in the GDR for October 14th and all-German elections for December 2nd. As a result, while the negotiations on the Unification Treaty were in progress, there were political debates in both the GDR and the Federal Republic on issues relating to voting rights and dates. At the beginning of August, the Bundestag failed to bring the date for the all-German election to October 14th, so that it remained December 2nd. In accordance with current electoral law, the relevant electoral lists had to be drawn up no later than eight weeks before the election. This date was Sunday, October 7, 1990. As a result, all voters had to be made citizens of the voting state at the latest in the course of the 40th calendar week. The earliest possible accession date for this results from the decision of the Federal Cabinet : "The Federal Government considers any accession date after October 2nd to make sense." The date was finally set in a special meeting of the GDR Prime Minister de Maizière on August 22nd People's Chamber , which started at 9 p.m. After a heated debate, the President of the People's Chamber, Sabine Bergmann-Pohl , announced the result of the vote at 02:30 a.m. on August 23:

“The People's Chamber declares the GDR's accession to the scope of application of the Basic Law of the Federal Republic of Germany in accordance with Article 23 of the Basic Law with effect from October 3, 1990
. 363 votes were cast. No invalid vote was cast. 294 MPs voted yes.
(Strong applause from the CDU / DA , DSU , FDP , partly the SPD , the members of the parliamentary groups mentioned rise from their seats). "

“62 MPs voted no and seven MPs abstained.
Ladies and gentlemen, I think this is a really historic event . We certainly did not make the decision easy for ourselves, but we made it today on our responsibility before the citizens of the GDR as a result of their will to vote. I thank everyone who made this result possible by consensus across party lines. "

In a subsequent personal statement, the SED-PDS chairman Gregor Gysi replied regretfully: “Parliament has just had nothing more and nothing less than the downfall of the German Democratic Republic on October 3, 1990 (cheering applause from the CDU / DA, the DSU and partly the SPD). "

Debate about relocation in 2004

At the beginning of November 2004 it became known that the Federal Government intended to celebrate German Unity Day , which fell on a Sunday that year, on the first Sunday in October in order to avoid an impending deficit with the resulting tax revenue of 500 million euros 2005 budget to decrease. Since Federal President Horst Köhler contradicted the plan, which had otherwise received little support, Federal Chancellor Gerhard Schröder decided not to pursue it any further on November 5th.

The official celebration of the Day of German Unity has been taking place since 1990 in the capital of the country that is chairing the Federal Council at the time . This is regulated by the " Königstein Agreement " according to the order of the countries in descending order of population. The cycle that applies until 2016/17 differs slightly from the current order of the population figures, as it was on 20/21. December 1990 was decided at the Prime Minister's Conference in Munich and the population of the federal states has since changed due to the strong internal migration . The official celebrations did not always take place in the state capital: In 2011, the celebrations in North Rhine-Westphalia were not in the state capital Düsseldorf, but in the federal city of Bonn, and in 2015 the celebrations were not held in the Hessian capital Wiesbaden, but in Frankfurt am Main. For 2021 the celebrations are not planned in Saxony-Anhalt's state capital Magdeburg, but in Halle (Saale).

Traditionally, a state ceremony and a citizens 'festival ("Germany Festival") take place on this day , at which the states and the government present themselves on the "Ländermeile", whereby the citizens' festival usually extends over several days. The celebrations were organized in or the organization is planned in:

Logo of the official celebration with the organizing country 2011

At the Brandenburg Gate and the Strasse des 17. Juni in Berlin events and concerts take place on that day. Celebrations are also held in the capitals of the German states and in other places.

Mosque associations have been inviting people to the Open Mosque Day on German Unity Day since 1997 in order to express the self-image of the Muslims involved as part of German society.

Since 1990, the Hoppegarten racecourse near Berlin has been experiencing the 'German-German Race Day' with the German Unity Award as the highlight.

Since 2012, the so-called Mouse Door Opener Day has been held on October 3rd in cooperation with the Sendung mit der Maus , on which various businesses and companies open their doors and give children in particular a look behind the scenes.

The central celebration of the 20th anniversary of German unity took place in Bremen in 2010. In his speech in the town hall , Federal President Christian Wulff said of the debate about integration: