Organization for Security and Cooperation in Europe

OSCE is a redirect to this article. Further meanings are listed under OSCE (disambiguation) .

The seat of the General Secretariat and the most important bodies is Vienna with the Hofburg and, since 2007, also the Palais Pálffy on Wallnerstraße (headquarters).

The goals of the OSCE are securing peace and post-conflict reconstruction. She sees herself as a stabilizing factor in Europe. As a regional agreement according to Chapter VIII of the Charter of the United Nations , the OSCE is to serve as the first international point of contact in conflicts within its sphere of activity in accordance with the principle of subsidiarity . It is seen as a system of collective security and is therefore in competition with NATO , which is, however, much more militarily oriented. It also works with international organizations on the "OSCE first" principle . Due to the unsuccessful 2010 Summit, the question of future goals for the OSCE remained open.

The activities of the OSCE are divided into three thematic areas (“dimensions”), which go back to the three baskets of the Helsinki Final Act. These are (a) the political-military dimension, (b) the economic and environmental dimension and (c) the humanitarian (human rights) dimension. 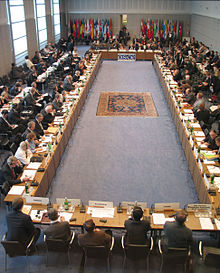 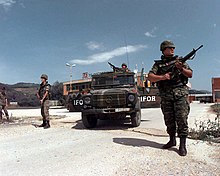 The OSCE supported the IFOR mission in Bosnia and Herzegovina , e.g. B. by support points as shown in this picture

The Secretaries General of the OSCE:

The OSCE Secretary General has the following tasks:

The Office for Democratic Institutions and Human Rights (ODIHR, the English abbreviation ODIHR ) in Warsaw is the “Main Institution of the Human Dimension” (Basket III) of the OSCE. Originally the Free Elections Office (an international election observation institution) was the human dimension component of the institutional package to be negotiated at the Paris Summit of the CSCE in 1990.

His first task was to monitor the elections in the former Eastern Bloc countries of Central and Eastern Europe as well as in the Central Asian republics of the former Soviet Union. The Helsinki Document of 1992 further strengthened the ODIHR, and Norway included the concept of democratization and human rights in the title of the institution.

As a result, the ODIHR organizes an implementation meeting every two years in Warsaw, which monitors compliance with the OSCE obligations under Basket III and in which, in addition to the OSCE participating States, other intergovernmental organizations and non-governmental organizations take part. In addition, it organizes seminars, supports the missions of the OSCE and the development of democratic structures through a variety of other measures, gathers information and makes it available, and publishes instructions. Election observation also makes up a large part of the activities.

The economic and environmental dimension goes back to the Helsinki "second basket" (cooperation in the fields of technology, science, economy and the environment). In the economic and environmental dimension, the organization takes care of the fight against corruption, money laundering, the financing of terrorism, organized crime and Internet crime, among other things. The OSCE also promotes cooperation in the field of the environment, water management, migration issues and energy.

The post of High Commissioner on National Minorities (HCNM) was created at the Helsinki Summit in 1992. The HCNM's office is in The Hague and employs around 10 people.

This office of silent diplomacy has been shaped since 1992 by the Dutchman Max van der Stoel, who was replaced in 2001 by the Swede Rolf Ekéus . From 2007 to 2013, the former Norwegian Foreign Minister Knut Vollebaek held the office of HCNM . Astrid Thors, a former member of the European Parliament and Finnish Minister for Migration and European Affairs, began her term of office as HCNM on August 20, 2013. The Italian diplomat Lamberto Zannier has been in office since July 19, 2017 .

The Office is intended to identify and resolve tensions that could endanger peace, stability or good relations between the OSCE participating States and that develop out of ethnic tensions. His mandate allows the High Commissioner on National Minorities (HCNM) to intervene at an early stage, that is, preventive diplomacy.

The HCNM's mandate is innovative in comparison to the previous instruments for combating conflict, as it leaves the intergovernmental level and thus enables a direct approach in the affected state. The HCNM is used to provide early warning of minority tensions and may be empowered by the High Council to take early action as part of his engagement.

Commissioner for Freedom of the Media

Finally, with Decision 193 at the meeting of the Permanent Council on November 5, 1997, the office of the Representative on Freedom of the Media (RFOM), based in Vienna, was established as the youngest of these three independent institutions.

The establishment of the institution of the OSCE Representative on Freedom of the Media goes back to a German initiative. It is based on the recognition of the particular importance of OSCE commitments with regard to freedom of expression and the role of free and pluralistic media. The mandate for the creation of the new institution came from the OSCE Summit, which took place in Lisbon in 1996. The mandate was approved by the Council of Ministers in Copenhagen (December 1997), through which the appointment of MP a. D. Freimut Duve as the first OSCE Representative on Freedom of the Media. His successor was the Hungarian Miklós Haraszti from March 2004 to March 2010 (also for the permissible duration of two terms of office) . In June 2017, Harlem Désir from France was appointed OSCE Media Representative.

The media representative has an early warning function comparable to the OSCE High Commissioner on National Minorities. He takes action in the event of restrictions on freedom of the media, which are usually signs of a political development that is prone to conflict. If serious violations of OSCE principles are suspected, the Media Representative has the opportunity to establish direct contact with the participating State and other parties and to assess the issue, as well as to assist the participating State and to help solve the problem.

Other bodies and institutions

The OSCC, which is responsible for the implementation of the Treaty on Open Skies, is not directly part of the OSCE, but is linked to the organization in Vienna .

→ Main article : Conference on Security and Cooperation in Europe

The OSCE was preceded by the Conference on Security and Cooperation in Europe (CSCE), which came about on an initiative of the Warsaw Pact. From the 1950s onwards, the Soviet Union had called for such a conference, but the Western powers, especially West Germany, had refused. Bonn feared that such talks could lead to international acceptance of the division of Germany. It was not until the new Ostpolitik of the social-liberal coalition under Federal Chancellor Willy Brandt (SPD) in the early 1970s that the idea of ​​a CSCE in the West was on the agenda. Under Brandt's motto “Change through rapprochement”, the icy mood of the Cold War was relaxed and the CSCE made possible. The first of these multinational conferences took place in Helsinki from 1973 to 1975 . All European countries (with the exception of Albania ), the Soviet Union as well as the USA and Canada took part in the cross-bloc conference .

The conference was characterized by an exchange deal: for the Eastern Bloc it brought recognition of the limits of the post-war order and a stronger economic exchange with the West. In return, the East made concessions on human rights. In the years that followed, civil rights movements arose in several socialist countries that invoked the Helsinki Final Act and contributed to the collapse of the Eastern Bloc, so that the CSCE made a decisive contribution to the end of the East-West conflict.

At the CSCE summit meeting in Budapest on December 5 and 6, 1994, it was decided to institutionalize the CSCE and rename it as the Organization for Security and Cooperation in Europe (OSCE) with effect from January 1, 1995 .

The following summits took place in the 1990s

After an eleven-year break, the next OSCE summit took place from December 1-2 , 2010 in Astana . The conference was chaired by Kazakh President Nursultan Nazarbayev . Differences in opinion between western and eastern member states regarding the future content and strategic direction of the OSCE led to another fruitless conclusion of the conference. The planned adoption of an action plan to resolve international conflicts and reform the OSCE failed.

Meeting of the OSCE Council of Ministers

At the end of the meeting on December 5, 2014 in Basel , there were declarations, but no final declaration. Chairman Didier Burkhalter stated that the security situation in Europe deteriorated in 2014 due to the Ukraine crisis .

On the 3rd / 4th December 2015 the OSCE Ministerial Council met in Belgrade (Serbia). The OSCE Ministerial Council met in Hamburg from December 8, 2016 to December 9, 2016 . The meeting took place on the grounds of Hamburg Messe . The foreign ministers of the participating states also met on December 8 in the large ballroom of Hamburg's town hall for a joint working lunch. The meeting took place in Hamburg because Germany took over the chairmanship of the Organization for Security and Cooperation in Europe on January 1, 2016, for the second time since 1991.

The chair changes annually. A foreign minister acts as chairman.

Commons : Organization for Security and Co-operation in Europe  - Collection of pictures, videos and audio files