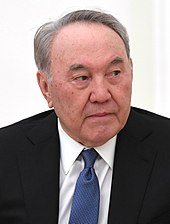 Nursultan Nazarbayev Äbischuly ( Kazakh - Cyrillic Нұрсұлтан Әбішұлы Назарбаев , transliteration Nursultan Nazarbaev Äbişulı ; Russian Нурсултан Абишевич Назарбаев / Nursultan Nazarbayev Abischewitsch * 6. July 1940 in Tschemolgan , Kazakh SSR , Soviet Union ) is a Kazakh politician . He was the President of Kazakhstan from 1990 to 2019 . He is chairman of the Nur Otan party and, as head of the State Security Council and “leader of the nation”, continues to hold the strings of power in his hands.

Nazarbayev was initially chairman of the Council of Ministers of the Kazakh SSR and from June 22, 1989 to August 28, 1991 general secretary of the Communist Party of the Kazakh SSR . He was originally planned by the Soviet state and party leader Gorbachev as vice-president.

He was elected President of the Soviet Republic on April 24, 1990 by the Parliament of the Kazakh SSR (the Supreme Soviet ). After the collapse of the Soviet Union , Nazarbayev was re-elected for five years in the now independent Kazakhstan in an election on December 1, 1991 , in which there was no opposing candidate. In a referendum on April 29, 1995 , in which 95 percent of the electorate voted for Nazarbayev's term of office to be extended until 2000, he extended his term of office for another five years without an election. The powers of the president were extended by the new Kazakh constitution of September 1995 at the expense of parliament. In autumn 1998 this extended the presidential term of office from five to seven years. Nazarbayev assumed the first seven-year presidency in January 1999 after more than 80 percent voted in favor of the incumbent in another early presidential election . When he was re-elected in December 2005 , he received 91 percent of the vote.

Since 2007 and a further constitutional amendment passed by parliament, Nazarbayev has been allowed to vote as often as he wants. The term of office, however, was reduced from seven to five years. In the summer of 2010, parliament also named him “Leader of the Nation” ( Kazakh Елбасы / Elbasy) and granted him and his immediate family life-long immunity from prosecution . In January 2011, parliament decided to hold a referendum on extending Nazarbayev's term of office until 2020 - the 2012 and 2017 presidential elections would therefore have become obsolete. However, the Constitutional Council saw this as a breach of the constitution, whereupon Nazarbayev - "to take democratic principles into account" - announced early presidential elections. The presidential election took place on April 3, 2011. Nazarbayev was confirmed in office with 95.5 percent of the vote. The Organization for Security and Cooperation in Europe (OSCE) stated that “serious irregularities” had been observed during the election.

In the parliamentary election in January 2012 , Nazarbayev's party received 80.74 percent of the vote. For the first time, other parties moved into parliament with the state-loyal business and business party Ak Schol and the Communist People's Party of Kazakhstan. The government had announced in advance that it would strengthen the democratic processes in Kazakhstan and hold elections according to international standards. OSCE observers, however, criticized the election. Cases of fraud had been found. Several opposition parties and politicians were also excluded from the election. On December 1, 2012, the newly introduced annual holiday “Day of the First President” was held in Nazarbayev's honor for the first time. The Nazarbayev Center has existed since 2012 . In the western media there is talk of an expansion of the personality cult to include the president. With 97.7 percent of the vote, Nazarbayev won the presidential elections in April 2015. The record result was hailed as a “sensational election” by the Kazakh media. In the early parliamentary elections in March 2016, Nazarbayev's Nur Otan party emerged as the clear winner again with more than 80 percent of the vote.

In his foreign policy, Nazarbayev tries to balance cooperation with the West while maintaining good relations with Russia . He is courted by the West because Kazakhstan has large gas and oil reserves. American companies were able to acquire concessions for large oil fields in Kazakhstan. In domestic politics, taking into account the interests of the clan, he managed to transform the wealth of resources into increasing prosperity, at least in the cities. Political reforms are neglected, however, and only a small elite benefit from the gas and oil resources. The regime uses repressive methods against opposition and political opponents. The media are largely aligned and largely controlled by the president's daughter Dariga Nazarbayeva .

Under his initiative, the capital of Kazakhstan was moved from Almaty to Astana . In April 2017, Nazarbayev announced that it would launch a legislative initiative that would prohibit young men and women in Kazakhstan from wearing beards or dressing in black. In the same month, he also spoke out in favor of the fastest possible transition from Cyrillic to Latin script (formally already done in 1998). On March 19, 2019, he announced his resignation after dismissing the government in office since 2016 on February 21, 2019 because of poor economic data. The previous President of the Kazakh Senate , Qassym-Shomart Toqayev, was sworn in as his successor on March 20, 2019 . In his role as Chairman of the Security Council for life, Nazarbayev has the right to veto appointments to important offices in the country and his position as “leader of the nation” is anchored in the constitution.

Nazarbayev is married to Sara Nazarbayeva and has three daughters with her. He is a Sunni - Islamic denomination. The Nazarbayev clan's fortune was estimated at $ 7 billion in 2010.

Nazarbayev is faced with international allegations of corruption. According to research by the New Yorker , he is said to have received $ 78 million in bribes from James Giffin , a middleman for US oil companies, when granting production licenses . Nazarbayev's former son-in-law Rachat Aliyev , also a former head of the Kazakh financial police, deputy director of the Kazakh secret service KNB and former deputy foreign minister, has repeatedly announced that he will testify in the ongoing trial (“ Kazakhgate ”) in the United States.

In the course of a US legal aid appeal to Switzerland , US $ 120 million from oil deals with Kazakhstan were blocked. From September 2010, the Swiss Federal Prosecutor's Office investigated Nazarbayev and his son-in-law Timur Kulibayev on suspicion of money laundering.

The Kazakh journalist Sergei Duvanov was sentenced to three and a half years imprisonment for his research into this case in what according to the OSCE is a highly questionable trial in Kazakhstan.