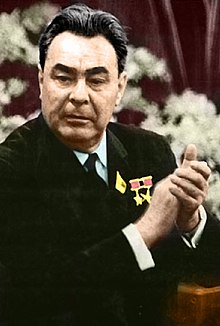 Leonid Brezhnev ( Russian Леонид Ильич Брежнев listen ? / I , scientific. Transliteration Leonid Brezhnev Il'ič ; born December 6, jul. / 19th December 1906 greg. In Kamenskoe , yekaterinoslav governorate , Russian Empire (now Kamjanske, Dnipropetrovsk Oblast , Ukraine ); † November 10, 1982 in Moscow ) was a Soviet politician of Ukrainian nationality. From 1964 to 1982 he was general secretary of the CPSU , from 1977 to 1982 as chairman of the presidium of the Supreme Soviet head of state and four times “ Hero of the Soviet Union ”.

Brezhnev was the son of a metalworker. He completed technical training. In 1923 he joined the communist youth organization Komsomol . From 1923, Brezhnev did his military service in the Red Army . There he became a political commissar after training as a tank soldier .

He then studied at the Metallurgical Institute in Kamjanske until 1935 . After 1936 he was briefly head of this institute.

When Brezhnev joined the Communist Party in 1931 , Josef Stalin was its undisputed leader and an idol for many young communists. During and after the period of the Great Terror from 1936 to 1938, engineers, technicians and natural scientists rose to priority in the party, and Brezhnev quickly made a career. In 1939 he became party secretary in the Dnepropetrovsk Oblast Regional Committee in Dnepropetrovsk , responsible a. a. for propaganda and for the local defense industry.

After the start of the German-Soviet War on June 22, 1941, Brezhnev, like most political officers , was immediately appointed to the Red Army . There he was commissioned to organize the evacuation of the local armaments industry from Dnepropetrovsk to the east; the city fell into German hands on August 26th during the Battle of Kiev . In October 1941 he was appointed Brigade Commissar and Deputy Head of Political Administration on the Southern Front . After the Germans occupied Ukraine completely, Brezhnev was transferred to the front in the Caucasus in the summer of 1942. With the abolition of the commissioners and the introduction of the individual leadership , his rank was transferred to that of a colonel .

In April 1943 he was appointed head of the political department of the 18th Army . It was there that he met Nikita Khrushchev , who became an important patron of Brezhnev. When the war turned in favor of the Soviet Union, the 18th Army advanced westward through Ukraine as part of the 1st Ukrainian Front . Towards the end of the war, Brezhnev was 1st member of the War Council of the 4th Ukrainian Front when it took Prague on May 9, 1945. In August 1946, Brezhnev was released from military service with the rank of major general .

Rise in the post-war period

After numerous reconstruction projects in the Ukraine, Brezhnev was first secretary of the Zaporozhye Regional Committee of the Communist Party from 1946 to 1947 and of Dnepropetrovsk from 1947 to 1950.

From 1950 to 1952 Brezhnev was First Secretary of the Central Committee of the Communist Party of the Moldovan Soviet Republic (now the Republic of Moldova) and at the same time Deputy Deputy of the Supreme Soviet , as the legislature formally the highest state organ of the Soviet Union.

Brezhnev belonged to the Central Committee of the CPSU since 1952 .

From 1953 to 1954 he was First Deputy Head of the Army's Main Political Administration. 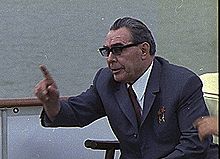 Leonid Ilyich Brezhnev on a visit to the United States, 1973

In 1957 Georgi Malenkov , Vyacheslav Molotov , Lasar Kaganowitsch and others tried unsuccessfully to depose Nikita Khrushchev as First Secretary of the party. With Khrushchev's help, Brezhnev reached the highest political body in the Soviet Union; on June 29, 1957, he became a full member of the Politburo (then Presidium) and remained so until his death on November 10, 1982.

In 1960 he represented moderate positions in the course of the U-2 affair - like his supporter Khrushchev. But as a result of this crisis, politicians prevailed who were skeptical of the policy of rapprochement with the USA that had been pursued since 1959 - Khrushchev had traveled to the USA for his first meeting with President Eisenhower in September 1959 -. This included Frol Kozlov , who ousted Brezhnev as Crown Prince Khrushchev. As a result, Brezhnev had to vacate his position as Central Committee secretary again in May 1960. In place of Kliment Voroshilov , he was chairman of the Presidium of the Supreme Soviet between 1960 and 1964 and thus head of state of the Soviet Union. Politically, the change to the post of only formal head of state was viewed as a descent from power.

The way to the party leader

However, he increasingly managed to improve his position in the Politburo. Frol Kozlov was still the second man after Khrushchev. Around 1960 and 1961, several Khrushchev supporters ( Kiritschenko , Furzewa , Ignatow , Belyayev ) lost their political office mandates. Koslow suffered a stroke on April 10, 1963, from which he did not recover; he died in January 1965. Since Koslow's stroke, Brezhnev was the second most powerful man behind Khrushchev. On June 22, 1963 Brezhnev was appointed Secretary of the Central Committee, initially while retaining his post as Chairman of the Presidium of the Supreme Soviet of the USSR. It was the third time that he was elected to this office. In June 1964 at the latest, when he gave up the post of head of state to Anastas Mikoyan in order to “concentrate” on his tasks as Central Committee secretary, Brezhnev was the potential successor to Khrushchev, the “second party secretary”. He took his chance when four months later, on October 14, 1964, Khrushchev was ousted as party leader with a majority from the Politburo and Central Committee. Among other things, this was accused of falling out with the People's Republic of China , the failures in agriculture and poor collective action. It was Mikhail Suslov , Dmitri Polyansky , Nikolai Podgorny and Alexei Kosygin who helped Brezhnev to become the new First Secretary of the Central Committee of the CPSU.

Secretary General and Head of State

With Andropow and Honecker in Berlin, 1967 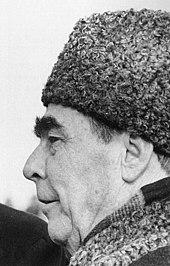 On April 8, 1966, he assumed the title of General Secretary of the Central Committee of the CPSU , a designation that had previously been used by Josef Stalin from 1922 to 1952. After he had prevailed against his rivals Alexei Kosygin and Nikolai Podgorny in terms of power politics, his position was consolidated. The Soviet population saw the beginning of this change as positive, so Brezhnev promised a certain stability due to his predictability after the reform-minded Khrushchev. 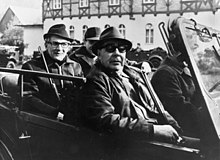 Brezhnev and Honecker during a hunting trip, 1971

Commemorative plaque from Brezhnev's Moscow house at Kutuzov-Prospekt 26, today on display at the Wall Museum in Berlin's Friedrichstrasse .

In August 1968, Brezhnev forcibly ended the Prague Spring with an invasion of Warsaw Pact troops and established the so-called Brezhnev Doctrine . With this doctrine, the sovereign power of the Soviet Union established the limited sovereignty of its satellite states in Europe. On the other hand, after 1970, Soviet support for the socialist government of Salvador Allende in Chile remained largely rhetorical, although Allende asked for economic and military aid against the threatened military coup.

On June 19, 1973, Brezhnev visited the United States and held talks with US President Richard Nixon .

By participating in the CSCE process , which graduated in 1975 in the Helsinki Final Act was, Brezhnev wanted détente promote.

On May 5, 1976, Brezhnev was appointed Marshal of the Soviet Union .

In 1977, Brezhnev was succeeded Podgorny as chairman of the Presidium of the Supreme Soviet and thus Soviet head of state. For the first time he combined the offices of the powerful general secretary of the Central Committee of the CPSU and those of the formal head of state in one person.

Leonid Brezhnev was regarded as an apparatchik without outstanding qualities and, on the one hand, personified the encrustation and rigidity to which the Soviet system had fallen in his time. On the other hand, the years under Brezhnev were the only period in which the Soviet Union internally came to rest. Between revolution, Stalinism , de-Stalinization and later perestroika , the years under Brezhnev were the only ones in the entire history of the Soviet Union in which it did not experience any internal upheaval. Under him, the average age of the members of the Politburo should be over 70 years of age. Mikhail Gorbachev later described the Brezhnev era as the "time of stagnation", later transformed into the "golden age of stagnation" by the Russian historian Viktor Kozlov. Gorbachev had criticized Brezhnev harshly during his tenure, but after retiring from active politics, he relativized his criticism and said that Brezhnev was "by no means the comic book villain he is now often made into".

In domestic politics, Brezhnev initiated a restalinization of the party and state, which is why one speaks of so-called neo - Stalinism . Among other things, the freedom of expression was massively restricted again, the penalties for breaking political laws were significantly tightened and an attempt was made to rehabilitate Stalin and make him appear positive by highlighting his great services during the Second World War .

In terms of foreign policy, Brezhnev benefited from the early 1970s from a temporary weakness in the USA caused by the lost Vietnam War , which gave the Soviet Union a brief respite in the arms race . Brezhnev put an end to this brief phase of relaxation - it only lasted from around 1972 to 1979 - with the military intervention in Afghanistan in December 1979. This company turned into a debacle. As a result, the ratification of the SALT II Treaty by the US Senate failed and the 1980 Summer Olympics in Moscow were boycotted by the USA and 64 other nations, including the Federal Republic of Germany.

At the end of 1974, the doctors at Brezhnev found the incipient calcification of the cerebral vessels. In the last years of his life, Brezhnev suffered several strokes and heart attacks, which greatly reduced his intellectual receptivity. However, he was repeatedly elected as Secretary General, among other things because his supporters wanted to keep their posts and feared any change.

Brezhnev was awarded the Lenin Prize for Literature for his books Das kleine Land (Russian: Malaja semlja ) and the subsequent volumes, Wiedergeburt und Neuland . The three volumes of memoirs were published in an edition of 15 million copies. For several years these works were the subject of literature lessons at school. Five years after his death, Brezhnev's trilogy of memoirs was removed from bookstores.

Brezhnev died in his sleep on the morning of November 10, 1982 of "sudden cardiac arrest". After his death, the Soviet Union was de facto without a head of state for two days . Brezhnev's grave is in the necropolis on the Kremlin wall in Moscow. The city of Naberezhnye Chelny was renamed Brezhnev (Брежнев) in his honor, but was given its original name back in 1988.

State visits to the Federal Republic of Germany

At the 1981 meeting with Schmidt, the worrying arms race between the two superpowers and the NATO double decision were the focus of the talks. Schmidt urged Brezhnev to seek talks with Ronald Reagan (US President from 1981 to 1989). Reagan had been elected to succeed Jimmy Carter in November 1980 ; the Soviet Army marched into Afghanistan at the end of 1979 .

Brezhnev said he could not remember "that in the last third of this century anyone with such fervor declared the Soviet Union his military opponent and built up his armaments program with a view to the clash with us, as is now fashionable in Washington" .

“Communism is the only political movement in the world that, armed with the scientific theory of social development, clearly recognizes the historical perspectives of humanity. [...] "