This article deals with the Soviet politician; for the city of Voroshilov see Ussuriysk . 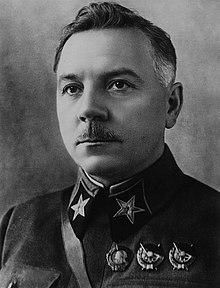 Kliment Voroshilov as Marshal of the Soviet Union, 1937

Kliment Voroshilov ( Russian Климент Ефремович Ворошилов pronunciation ? / I ., Scientific transliteration Kliment Efremovič Voroshilov * January 23 . Jul / 4. February 1881 greg. In Werchneje in Ujesd Bachmut , yekaterinoslav governorate , Russian Empire (today Lysychansk , Ukraine ); † December 2, 1969 in Moscow ) was Defense Minister ( People's Commissar ) of the Soviet Union from 1925 to 1940 . As Nikolai Schwernik's successor , Voroshilov , who was appointed Marshal of the Soviet Union in 1935, was Chairman of the Presidium of the Supreme Soviet from 1953 to 1960, and thus head of state of the country.

After a short schooling, Voroshilov worked in various trades; since 1899 he was involved in the labor movement and in 1913 joined the Russian Social Democratic Workers' Party (РСДРП). Until the October Revolution he organized strikes and illegal activities in the Donets Basin , Baku and Saint Petersburg , where he was imprisoned and exiled several times. After the February Revolution of 1917 he was elected to the Petrograd Workers and Soldiers Council; During the following civil war he participated in the formation of the Red Army and played an important role in the struggle for Tsaritsyn (from 1925: Stalingrad, from 1961: Volgograd ), where he worked closely with Stalin and, among other things, the mass shootings of officers of the Tsarist army organized.

From 1926 to 1957 he was a full member of the Politburo of the Communist Party of the Soviet Union (CPSU) and thus at the center of political power.

In the 1920s and 1930s Voroshilov's military rise continued in various positions in the Red Army . On November 7, 1925 he became People's Commissar (Minister) for Army and Navy (renamed People's Commissar for Defense in June 1934 ) and Chairman of the Revolutionary War Council . On November 20, 1935, he was appointed Marshal of the Soviet Union. During the political cleansing in the late 1930s, Voroshilov was in a safe position as a close confidante of Stalin and in March 1940 was one of the four signatories of Lavrenti Beria's proposed execution order for Polish prisoners of war that led to the Katyn massacre .

After the catastrophic losses of the Red Army in the Soviet winter war against Finland, Voroshilov was replaced on May 8, 1940 in the office of the People's Commissar for Defense by Marshal Tymoshenko . He remained one of the deputy chairmen of the Council of People's Commissars until 1953 (from 1946: Council of Ministers of the USSR ). At the beginning of the Great Patriotic War in June 1941 he was responsible for the north-western part of the national defense. As commander of the Leningrad Front, he did not succeed in preventing the Leningrad blockade , which began on September 8, 1941, by Wehrmacht troops . Voroshilov retained Stalin's trust and from 1945 to 1947 chaired the Soviet Control Commission in Hungary .

After Stalin's death in March 1953, Voroshilov was chairman of the Supreme Soviet and thus head of state of the USSR until 1960 . In 1956 - in honor of his 75th birthday - he received the " Hero of the Soviet Union " award for the first time . Together with Malenkov and Khrushchev , he was involved in the activities against intelligence chief Lavrenti Beria, which ended with his death sentence and execution in December 1953. In Khrushchev's initiative to condemn the personality cult around Stalin, however, he was not part of the responsibility for the repression of the 1930s. He initially supported Malenkov's failed attempt to depose Khrushchev as First Secretary of the CPSU in 1957, but ultimately switched back to Khrushchev's side.

In 1960 Voroshilov retired and was replaced as chairman of the Presidium of the Supreme Soviet by Leonid Brezhnev . As a "living legend of Soviet history", however, he was reappointed to the Central Committee from 1966 to 1969 . For the 50th anniversary of the Red Army in 1968, he was honored for the second time as Hero of the Soviet Union.

Voroshilov died in Moscow at the age of 89 and was buried at the Kremlin wall in Red Square , where a memorial to him was erected on his grave. A plaque on his former home on Granowski Street (улица Грановского), since 1992 Romanov pereulok (Романов переулок), commemorates him. In Turkey, whose War of Independence was supported by Soviet military aid, Voroshilov is depicted in the group of people at the Monument of the Republic on Istanbul's Taksim Square . 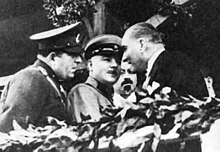 With the KW series , a number of Soviet heavy tanks that were used in World War II were named after Voroshilov, as was the heavy artillery tug Voroshilovets . Three cities bore his name: Voroshilovgrad in the Ukraine (from 1935 to 1958 and from 1970 to 1990, today Luhansk again ), Voroshilovsk in the RSFSR (from 1935 to 1943, today again Stavropol ) and Voroshilov in the Russian Far East (from 1935 to 1960, today Ussuriysk ), as well as some villages and kolkhozes . An award was named after Voroshilov, which was given to the best marksmen in the Red Army between 1932 and 1939 ( Ворошиловский стрелок = Voroshilov marksman). The Military Academy of the General Staff of the USSR also bore his name. In the GDR , the holiday camp "Klim Voroshilov" near Templin and until 1989/90 the "Kliment-Jefremowitsch-Voroshilov secondary school" in Leipzig's Scharnhorststrasse bore his name. On the occasion of his visit in 1933 Voroshilov was made an honorary citizen of the Turkish city of Izmir ; a boulevard there bore his name until 1951 (today “Plevne Bulvarı”). As early as 1928 and 1929, two Berlin pioneer camps near Templin were named after Voroshilov, and so did the representations by Heinrich Vogeler .