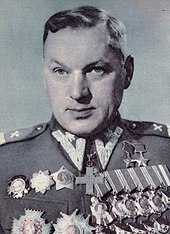 Konstantin Rokossovsky ( Russian Константин Константинович Рокоссовский or polish Konstanty Rokossovsky * 21st December 1896 in Warsaw , † 3. August 1968 in Moscow ) was a Soviet - Polish communist , Marshal of the Soviet Union , Defense Minister of the People's Republic of Poland and Marshal of Poland .

Rokossowski came from an impoverished branch of the family of the Polish nobility of the coat of arms tribe Glaubicz (Glaubitz) , which was already known in the 15th century , whose name was derived from the original family estate of Rokosowo near Kościan in Greater Poland . Rokossovski's ancestors had lost their goods and had to take up civil professions in Congress Poland as participants and in the uprisings of 1830 and 1863 against Russian rule. His father Ksawery Wojciech, (1853-1910) was a well-respected and well-paid profession as a locomotive driver , his mother Antonina Ovsjannikowa came from the Russian aristocracy and was a teacher. Rokossowski's father died in a train accident in 1910, and his mother died barely a year later.

Rokossowski attended the private Laguna elementary school and the secondary school of the commercial cooperative in Warsaw, which he had to leave in 1910 after the death of his mother to take up work in a stocking factory. In 1912 he was arrested as a participant in the May Day demonstration and lost his job, after which he received an apprenticeship in a stonemason's workshop.

After the outbreak of World War I , he volunteered for the Russian 5th Cavalry Division, which was stationed near Warsaw. As a soldier of the 5th Kargopol Dragoon Regiment, he took part in the fighting near Warsaw, Lodz , Lithuania and Latvia . In 1915 he successfully completed a non-commissioned officer course and was promoted to corporal . Around this time he changed his patronymic from "Ksawerowitsch" to "Konstantinowitsch" in order to appear less Polish and in the hope of being able to make a career in the Russian Empire . He also had the place of birth changed in his papers and was now born in Velikiye Luki , Pskov Governorate (this is what the Soviet encyclopedia of 1972 says ).

After the October Revolution he refused to join the Polish Corps that was emerging in Russia and, after the dissolution of his old regiment, created a Kargopol division of the Red Army . As a soldier in the Red Army, he took part in the civil war, including in the Ukraine and the Urals, and in the battles against the army of Admiral Kolchak . Since 1919 a member of the Bolshevik party , he was regimental commander of the cavalry at the end of the civil war .

From 1920 to 1936 Rokossowski worked after completing his training at the officers' school (1924-1925; together with Georgi Zhukov ) as regimental and later brigade commander in the Far East, for a while he was seconded to Chiang Kai-shek as a military advisor . He was later stationed in the Soviet Republic of Belarus , where he was promoted to major general in 1936 .

In 1937, as part of the Stalinist purges of the Red Army, he was accused of spying for the Polish and Japanese intelligence services by employees of the NKVD's secret police . During interrogation, several teeth were knocked out, ribs broken and mock shootings carried out. In the subsequent trial he was demoted, sentenced to ten years in the Gulag and taken to Norilsk . In March 1940, after the winter war against Finland, which was very costly for the Soviet Union , he was pardoned without giving any reason and, after a stay at a health resort in Sochi, was returned to the army with his old rank.

At the beginning of the German-Soviet War Rokossowski commanded the 9th Mechanized Corps in the tank battle near Dubno-Lutsk-Rivne , where he was able to carry out a successful counterattack near Dubno. In July 1941 Rokossowski was therefore appointed lieutenant general and commander of an ad hoc operational group of the 16th Army, which was subordinate to the Soviet Western Front and defended the front section near Smolensk. (→ Kesselschlacht bei Smolensk ) Rokossowski was able to build up an effective defense in his sector and delay the German advance considerably. After Rokossovsky escaped with his staff from the Vyazma pocket in October 1941 , he was appointed commander of the 16th Army and practically reorganized it from available units. During the Battle of Moscow , the 16th Army defended the section of the front at Istra .

On March 8, 1942, he was seriously wounded by shrapnel in a night German bombardment of his quarters, a former farmhouse. He spent two months in the hospital and returned to the army immediately after his recovery in May 1942.

From 1942 to 1943 he was in command of the Don Front north of Stalingrad and chiefly responsible for the implementation of Operation Uranus , which led to the encirclement of the German 6th Army .

After the victorious battle of Stalingrad , Rokossowski interrogated General Field Marshal Friedrich Paulus, who had already been taken prisoner on January 31, on February 2, 1943, at 4 p.m. The photo taken on this occasion appeared in all Allied newspapers and made Rokossowski's face world famous.

Rokossovsky was promoted to army general and commander of the Central Front (later renamed the 1st Belarusian Front). In this position he played an important role in the Battle of Kursk , later in the fighting in Belarus and in Operation Bagration in mid-1944, which reached the area of ​​his old homeland, Poland. Like all commanders-in-chief of the Red Army, Rokossovsky was also assigned to a high party functionary as a "member of the military council"; this task was incumbent on Nikolai Bulganin . On June 29, 1944, Rokossovsky was promoted to Marshal of the Soviet Union and on July 30, he was awarded the title Hero of the Soviet Union .

On 30./31. In July 1944, after advancing several hundred kilometers, the Soviet units reached the right bank of the Vistula and liberated Warsaw's eastern suburb, Praga . The Polish Home Army then triggered the Warsaw Uprising on August 1, without any coordination with the leadership of the Soviet Union . These battles, which lasted until October 4, 1944, led to the extensive destruction of the city and ended with the defeat of the rebels close to the pro-Western government in exile.

In the January offensive of 1945 Rokossowski was the commander of the 2nd Belarusian Front , whose combat operations included East Prussia and West Prussia .

In the last phase of the war in northern Germany, Rokossowski's units reached the Elbe and met units of the US Allies for the first time on Elbe Day . On the Baltic coast, Rügen was conquered and shock troops came as far as Wismar , which had already been taken by the British. A few hours after the (1st) signing of the unconditional surrender of the Wehrmacht , he met the British Field Marshal Bernard Montgomery there on May 7, 1945 .

Konstantin Rokossowski, ID card of the Central Committee of the PZPR , signature on the right: Bierut , November 13, 1949

On June 24, 1945, Rokossovsky reported to Zhukov that the Red Army troops had taken part in the Moscow Victory Parade . From 1945 to 1949 he was Commander-in-Chief of the Northern Group of the Soviet Army stationed in Poland .

Stalin, who wanted a more energetic sovietization of the Polish People's Army , had Rokossowski appointed Marshal of Poland and Defense Minister by the President Bolesław Bierut, who was appointed by the Soviet Union . Rokossovsky was assisted by a large group of Soviet advisors and experts. Soon afterwards hundreds of Polish officers - especially those who had served as NCOs in the army of the Second Republic ( there were only a few of the old officer corps who went over to the Communists) - were dismissed. Most Poles saw in Rokossowski an "agent" of Stalin and did not trust him. Rokossowski had not lived in Poland for more than 30 years and therefore spoke only broken Polish. He decided that Polish soldiers should only speak Russian to him.

During the political upheavals in October 1956 , the former party leader Władysław Gomułka, imprisoned under Bierut, returned to the head of the Labor Party. Gomulka got the Soviet party leader Nikita Khrushchev through that Rokossovsky and his staff were ordered back to Moscow. Rokossowski was appointed Inspector General of the Armed Forces and Deputy Minister of Defense in 1957 . His last honorary position was that of member of the group of inspectors general of the Soviet Army.

He was married to a Russian woman, they had a daughter. A sister of Rokossowski lived her whole life in Warsaw and died there in 1982. Rokossowski died in Moscow in 1968; his urn was buried on the Kremlin wall in Moscow, where Stalin and Zhukov are also buried.

as well as numerous foreign orders and decorations.