The title of this article is ambiguous. Further meanings are listed under Istra (disambiguation) .

Istra ( Russian Истра ) is a city with 35,111 inhabitants (as of October 14, 2010) in the west of Moscow Oblast , about 56 kilometers from the Russian capital Moscow . It is located on the Istra river of the same name .

Istra was first mentioned in 1589 as Voskressenskoye ( Воскресенское , "Resurrection (place)") and in 1781 it was elevated to the status of the city of Voskressensk (Воскресенск). It was given its current name, which reflects the location of the city on the Istra River, in the Soviet era in 1930.

During World War II , Istra was briefly under German occupation and was badly hit in combat. 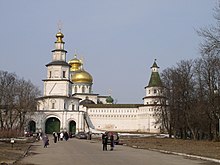 Entrance gates of the New Jerusalem Monastery in Istra

Industry does not play a major role in Istra. There are several food factories, a furniture factory and a textile factory in the city. The “Roentgenprom” factory produces medical X-ray machines.

West of Istra is located at 55 ° 55 '26 "N, 36 ° 49' 10" O a large high voltage test facility . The Research Institute for Electromechanics developed electrical protection systems for spacecraft, aircraft and power plants. The Marx generator was designed for a discharge capacity of three megawatts, the pulse voltage generator delivers nine megawatts. This sometimes generated lightning bolts 150 meters long. The »Allure« test site with a stationary EMP simulator is located near the research facility . Parts of the Allure complex with a dome 118.40 meters high and 236.50 meters in diameter collapsed on January 25, 1985 at the end of the construction work. The party official entrusted with the building supervision was transferred and replaced by Boris Yeltsin .

Agriculture is widespread in the area. Thanks to the proximity of the New Jerusalem monastery, tourism is also an important economic factor.

Istra is connected to the Russian expressway network via the M9 trunk road . It also has a train station on the Moscow – Riga line . There are regular regional traffic connections with Moscow via this, including the Riga train station .