The title of this article is ambiguous. Further meanings are listed under Pushkino (disambiguation) .

Pushkino ( Russian Пу́шкино ) is a city and administrative center of the raion of the same name in Russia with 102,874 inhabitants (as of October 14, 2010).

The city is located in Moscow Oblast on the Ucha River , about 30 km northeast of Moscow . The nearest town is Ivanteevka , six kilometers to the east .

Pushkino has been known in writing as a village under its current name since 1498. The place name is often falsely associated with the Russian word puschka , in German "cannon". In fact, city historians assume that Pushkino comes from the family name of its landowner in the 14th century, Grigori Morchinin-Pushka. This was also an early ancestor of the famous poet Alexander Pushkin , who otherwise has no relation to the city.

The agricultural village, which was largely unknown for a long time, only gained economic importance in the middle of the 19th century. This was mainly due to the construction of the Moscow - Sergiev Posad - Yaroslavl railway in the 1860s, near which the place is located. Starting with a textile factory founded around 1840, industry in Pushkino has developed to a great extent over the decades. At the end of the 19th century, one of the largest businesses in the area was the factories of the industrialist Armand, who employed over 1,000 people and whose best-known relatives were the revolutionary Inessa Armand .

The area around Pushkino has developed into a popular local recreation area and location for numerous summer dachas , thanks in part to the attractive landscape with the simultaneous proximity to Moscow and convenient transport links . A summer theater was built in Pushkino in 1896 to entertain those looking for relaxation, which was able to gain national fame through performances with the participation of prominent artists (including Leonid Sobinow , Konstantin Stanislawski , Fyodor Chaliapin ).

In 1925, as part of an administrative reform, the Pushkino, which now has over 3,000 inhabitants, was given city rights. Even in the Soviet era and to this day, Pushkino Raion is a popular summer residence. 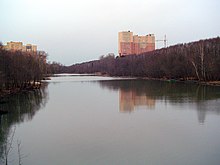 Pushkino is known to this day as an industrial location. The focus is on the textile, electrical and furniture industries as well as on device construction. In addition, a research institute for forestry is located in Pushkino . The main campus of the Russian State University of Tourism and Services is located near Pushkino .

Pushkino has a connection to the Trans-Siberian Railway via the Moscow – Yaroslavl railway section . There are regular regional connections with the Yaroslavl train station in Moscow. In 1929, Pushkino was one of the first cities in the Soviet Union to receive an electrified rail connection. The M8 trunk road ( Jaroslawler Chaussee ) also runs past Puschkino.