Wolokolamsk ( Russian Волокола́мск ) is a city in Russia in Moscow Oblast . It has 23,433 inhabitants (as of October 14, 2010) and is the administrative center of Wolokolamsk Raion . The city is located around 124 kilometers northwest of Moscow not far from the Moscow – Riga railway line . 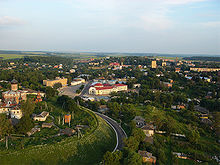 Panorama of the city

Volokolamsk was first mentioned in a document around 1135 , making it the oldest city in Moscow Oblast. The name comes from Wolok na Lame , a flat part of the Lama River ( Volga river system ), which flows near the city and served as a trade route from Novgorod to Moscow and Ryazan . Because of its location between Moscow and Novgorod, the place was long disputed between the Moscow and Novgorod Grand Dukes and was devastated several times in the 12th and 13th centuries, including during Tatar attacks. After a temporary annexation to Lithuania , Wolokolamsk went to the Grand Duchy of Moscow in 1513 . While the Smuta was devastated by the Poles at the beginning of the 17th century , the place spanned a shadowy existence for the next 200 years. It was not until 1781 that Wolokolamsk received city rights, after which a general plan for its development was drawn up. In the course of the 19th century, a few industrial companies were established here, and trade also developed strongly. At the beginning of the 20th century, Wolokolamsk received a railway connection as part of the establishment of a direct connection between Moscow and Riga.

During the Russian popular uprising in 1905 , Wolokolamsk was an important center of the labor movement; Among other things, the city's textile factory , at that time the largest industrial company in Volokolamsk, was hit . In October 1905, insurgent peasants near Volokolamsk proclaimed the Markovo Republic , which was only liquidated by state power in July 1906.

After the October Revolution , all of the city's industrial operations were nationalized. In 1929 the Wolokolamsk Raion was formed, the administrative center of which became Wolokolamsk.

In the autumn of 1941, during the German invasion of the Soviet Union , the city was highly contested as one of Moscow's outposts and suffered considerable damage. It was occupied by German troops from October 27 to December 20, 1941. A Soviet assault gun had blown up seven German armored vehicles as they advanced on Moscow in November 1941, and the crews had lost their lives. A memorial with an assault gun commemorates this event.

In the 1950s, the city was largely rebuilt and expanded into the 1960s by incorporating neighboring villages and settlements, including Smytschka in 1963. Founded in 1880 near a textile factory a little northwest of Wolokolamsk, this town had since 1929 the status of an urban-type settlement .

Today Volokolamsk is an important industrial city. In addition to a textile factory and several processing plants for agricultural products, there is a factory for building materials here. 2006–2007 a chemical plant for the US manufacturer 3M was built near Wolokolamsk . In Volokalamsk there is the 4.07 km long Moscow Raceway , where the DTM took place for the first time in Russia on August 4th, 2013. 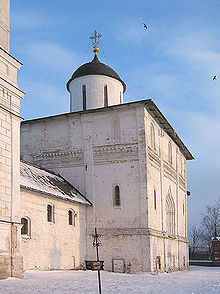