The Grand Duchy of Lithuania, (in Latin Magnus Ducatus Lituania (e) , literally: “ Grand Duchy of Lithuania”) Ruthenia and Schemeitia was a state that existed in the Middle Ages and the early modern period, spread over the territory of today's states of Lithuania and Belarus , partly also Ukraine , Russian Federation and Poland extended. At the height of its power shortly before 1400 it reached as far as the steppe areas on the Black Sea . In 1386 there was a union with the Kingdom of Poland . Especially after the Lublin Union in 1569, with which a joint Poland-Lithuania state was founded, it became more and more part of the new, Polish-dominated state. As a political unit, however, it only disappeared in the course of the partitions of Poland-Lithuania .

Coat of arms of the Grand Duchy of Lithuania from the Fürstenzug in Dresden
→ Main article : History of Lithuania

The first impulses for state formation came in the 13th century under the influence of the expansion of the Teutonic Order , but the Kingdom of Lithuania under Mindaugas remained an episode. State consolidation did not take place until around 1300: Gediminas founded the capital Wilna (lit. Vilnius ) in 1323 , which replaced Trakai Castle as the prince's seat.

The Mongol invasion of Eastern Europe and the earlier fragmentation of the Kievan Rus left a political vacuum in the region. In addition, due to its northwest location, Lithuania remained untouched by the Mongol campaigns. In the 14th century, especially under Grand Duke Gediminas and his sons Algirdas and Kęstutis , Lithuania rose to become an Eastern European great power .

Some sub-principalities of the Rus were subjugated, especially after the battle of the Irpen , some also voluntarily joined the Golden Horde during a weak phase . In 1362 this was defeated in the Battle of the Blue Water , the Lithuanian Grand Duke moved into Kiev and Belarus, the Ukraine and Western Russia were thus under the sovereignty of the Lithuanian Grand Dukes. The political structures of the East Slavic principalities were largely retained, but vassal principalities emerged for the sons of Algirdas, especially in the south. The Grand Dukes of Lithuania saw themselves from then on as the rightful heirs of the fallen empire of the Kievan Rus. The declaration of intent from Algirdas has been handed down: “ Omnis Russia ad Litwinos deberet simpliciter pertinere ” (German: “All of Russia should simply belong to the Lithuanians”). The later Polish-Lithuanian rulers bore the title magnus dux Littwanie, Samathie et Rusie .

In line with the majority of the population and the nobility, the East Slavic culture dominated the Grand Duchy more and more over the years. Ruthenian emerged as the language of the chancellery (i.e. the official language ), which remained common in the Grand Duchy of Lithuania until around 1700.

The still pagan grand princes pursued a policy of religious tolerance during this phase, which made the Grand Duchy of Lithuania attractive for European Jews as well as for numerous smaller groups such as the Karaites .

In the west, the Lithuanian rulers faced a constant threat from the Teutonic Order . These Lithuanian Wars could only be ended after the alliance with Poland and the Battle of Tannenberg in 1410.

After the Grand Duchy of Moscow finally broke away from Mongolian rule around 1480, it became Poland's greatest competitor from the end of the 15th century, especially since the beginning of the 16th century, since it also regarded itself as the legitimate successor of the Kievan Rus -Lithuania at the "Gathering of the Russian Earth ".

Lithuanian-speaking area in the 16th century. This also included the northeastern part of the Duchy (later Kingdom) of Prussia (" Prussian-Lithuania "), although politically before 1945 this never belonged to Lithuania.

In the 13th century, the majority of the population in the center of the principality spoke Lithuanian, but it only became a written language in the 16th century. In other parts of the state and in written documents, the Ruthenian language dominated . In addition, Latin and German functioned for diplomatic communication with western countries, the court used Ruthenian for matters with eastern countries. The three 16th-century codifications of Lithuanian law, the Lithuanian Statutes of 1529, 1566, and 1588, were written in Ruthenian.

In the late period of the Grand Duchy, Polish became more and more important, especially after the union with Poland. By 1697, Ruthenian was largely replaced by Polish as the official court language, but it was still used in a few documents until the second half of the 18th century. The upper class, i.e. H. the nobility of Lithuania was increasingly Polonized during the time of the Lithuanian-Polish Union, i. H. he adopted the Polish language and culture.

The Grand Duchy of Lithuania, as it was called in other languages:

Although Lithuania peacefully acquired much of its Ruthenian territories, it was able to resort to military strength if necessary. It was the only state in Eastern Europe that could effectively fight the Golden Horde . Their attempts to prevent Lithuania's further expansion often failed. In 1333 and 1339 the Lithuanians defeated large Mongolian forces in their attempt to wrest Smolensk from the Lithuanian sphere of influence. By 1355 Lithuania conquered the territory of the Golden Horde up to the Dnieper . In a crusade against the Golden Horde in 1398 (in an alliance with Toktamish ), Lithuania invaded northern Crimea and achieved a clear victory. Later, in 1399, Lithuania (with the intention of putting Toktamish on the throne of the Golden Horde) again took action against the Horde. However, in the Battle of the Worskla , Lithuania was defeated and lost the eastern steppe areas and its access to the Black Sea . 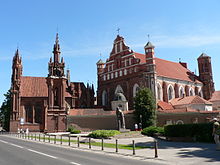 Church of St. Anne and the Church of the Bernardine Monastery in Vilnius
See also : Lithuanian mythology

After the baptism (1251) and coronation of King Mindaugas in 1253, Lithuania was a Christian state until 1260. After the Battle of the Durbe , in which the Teutonic Order suffered a severe defeat, Mindaugas was convinced by Treniota to renounce Christianity again. Lithuanian nobles practiced their own polytheistic religion until 1387 . Ethnic Lithuanians were very attached to their beliefs. Pagan beliefs and customs had to be ingrained in order to withstand the heavy pressure of missionaries and foreign powers. Relics of the old belief existed well into the 17th century.

Most of what is now Belarus and Ukraine were Orthodox . While the pagan belief in Lithuania was strong enough to withstand pressure from knight orders and missionaries for centuries , it ultimately succumbed to Christianity. In 1387, Lithuania converted to Catholicism , but most of the Ruthenian areas remained Orthodox.

In contrast to Latvia and Estonia , the Reformation in Lithuania had little success, mainly because of the close ties to Catholic Poland . 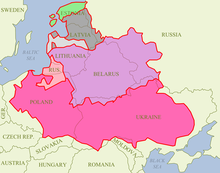 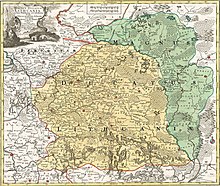 Map from 1780, the Russian partitions are green

In 1386, the Lithuanian Grand Duke Jogaila ascended the Polish throne after his baptism as Władysław II Jagiełło , which led to the Union of Krewo , in which an alliance between Poland and Lithuania and a personal union of the rulers of both areas was installed. Jogaila's cousin Vytautas became regent of Lithuania, but he continued to pursue an independent great power policy and under whose rule Lithuania reached its greatest expansion. His alliance and marriage policy gave him great influence both in the direction of Moscow and in the ongoing power struggles within the Golden Horde. However, the conflicts on the southern and eastern borders continued, so that security at least to the west, against the German Reich , was required. Further reformulations of the alliance with Poland in the Union of Vilnius and Radom (1401) and the Union of Horodło (1415) followed.

From around 1450 the pressure of Moscow and the Ottoman Empire began to increase, which was able to bring the Crimean Khanate , which emerged from the collapse of the Golden Horde, under its suzerainty. This required ever closer cooperation between the allies. The personal union formulated in the previous treaties was expanded in 1569 in the Lublin Union to a real union , the result of which was the Polish-Lithuanian dual state ("Republic of Both Peoples"). However, Lithuania ceded its territories in what is now Ukraine to the Polish crown . The defense of the southern periphery against the Ottoman Empire and its vassals , the Crimean Tatars , now fell to the Polish part of the empire.

With the union of the Polish and Lithuanian nobility in a common Sejm , which became more and more the focus of politics in the course of the 16th century, the independence of the Grand Duchy of Lithuania began to become a mere formality. However, it had its own institutions until the end of the 18th century. In particular, the Polish Crown Tribunal was not responsible for Lithuania; there was a Lithuanian tribunal in Hrodna . It was not until the constitution of May 3, 1791 , that the dualism between Poland and Lithuania and thus indirectly the Grand Duchy was abolished; in the short remaining time until the fall of the entire state as a whole, however, it did not have much effect.