Poland-Lithuania (also called Rzeczpospolita or Royal Republic and Latin Respublica Poloniae ) was a state in Central and Eastern Europe that existed from 1569 to 1795 . The dualistic , federal and feudal corporate state had elements of a republic based on a parliamentary - constitutional monarchy ( monarchia mixta ) and a ruler at the head of the state, elected by the majority of the aristocracy in a free election .

Since after the extinction of the Jagiellonian dynasty an electoral monarchy was introduced and the state parliament, the Sejm , which essentially represented the interests of the aristocracy, was given extensive powers, an aristocratic republic and, referring to the Polish states after 1918 , are also often referred to as of the First Polish Republic .

The two eponymous countries, the Kingdom of Poland (in Polish usually simply called Korona or the Crown ) and the Grand Duchy of Lithuania , were merged in a personal union as early as 1386 . The area covered in its greatest territorial extent around 1618 most of the national territory of today's Poland , today's Lithuania , Latvia and Belarus as well as parts of today's Russia , Estonia , Romania , Moldova and Ukraine .

Poland-Lithuania was a multiethnic state whose heterogeneous ethnic ethnicities followed a wide variety of creeds . Catholic , Protestant , Orthodox and Armenian Christians as well as Jews and Muslims lived here together and next to each other and enjoyed a politically supported religious freedom despite the dominance of the Catholic clergy .

With the Realunion of 1569, the Kingdom of Poland and the Grand Duchy of Lithuania as well as Royal Prussia and the Duchy of Livonia merged into a single state body. The rural areas of Royal Prussia were also administered by Polish starosts , but the city republics of Danzig , Thorn and Elbing , as well as the Principality of Warmia, were given a large degree of autonomy. Other areas, such as the Duchy of Prussia , the Duchy of Courland and Semgallia, and for a time the Danube principalities of Moldavia and Wallachia, were subordinate to Poland-Lithuania only as fiefdoms. Poland-Lithuania also had the Spiš cities until 1772 , which had been pledged by the Kingdom of Hungary to the Kingdom of Poland in 1421 .

The official Polish name of the state was Rzeczpospolita Korony Polskiej i Wielkiego Księstwa Litewskiego (German literal community of the Polish Crown and the Grand Duchy of Lithuania ), abbreviated to Rzeczpospolita .

Since the Polish republics have also been referred to as Rzeczpospolita in Polish since the restoration of Polish sovereignty , the name of the community can be translated into German with Republic of the Polish Crown and the Grand Duchy of Lithuania , despite the small etymological difference between rzeczpospolita and rēs pūblica . The apparent contradiction between kingdom and republic is lifted by the electoral kingship, through which the kings or grand dukes are no longer owners of “ divine grace ” (cf. Absolute Monarchy ), but only as civil servants in a “ presidency ” for life as officials of the united countries were. In a way, the Rzeczpospolita was comparable to the conditions in the neighboring Holy Roman Empire , in which there was also a similar form of electoral empire.

In English , Rzeczpospolita is often translated as " Commonwealth ".

By the Lublin Union of August 12, 1569, the personal union that had arisen in the Union of Krewo in 1385 was converted into a real union due to the lack of heir to the throne of Poland and Lithuania . The new state was called "Commonwealth of Both Nations". It was an electoral monarchy with a common currency, a common parliament (the Sejm ) and monarchs . The aristocracy, who made up around 10% of the population (significantly more than in most other European countries), and the bourgeoisie of the autonomous city-republics took part in the election. The lower Polish nobility were called Szlachta , the higher the magnates . Because of its aristocratic elements ( electoral monarchy with a strong position in the Sejm aristocratic parliament), this state is also known as an aristocratic republic . It existed until 1795. Even before the reform of 1791, the Sejm had significantly greater powers than the British Parliament at the time, for example in matters of foreign policy or even nobility.

However, each of the two parts of the empire had its own army, each headed by a grand hetman and a field hetman . At the Wahlsejm of 1697 the equality (coaequatio jurium) of the Lithuanian and the Polish nobility was decided. This curtailed the privileges of the Grand Hetman of Lithuania , who had previously dominated the grand ducal half of the empire. At the same time, the Ruthenian (old Belarusian) office language in the Grand Duchy of Lithuania was replaced by Polish.

At the first opportunity to freely choose a king, the Sejm decided in May 1573 in favor of a foreigner, the Capetian Heinrich von Valois from France. Only one year later, however, he secretly left Poland to live after the approaching death of his seriously ill older brother Charles IX. To become King of France. As a result, Anna Jagiellonica , who was still unmarried at 52 , daughter of the penultimate Jagiellonian Sigismund I the Elder, was elected king (not queen) and a male king candidate was sought on the condition that she marry her. The Transylvanian Hungarian Stephan Báthory had the advantage for the Sejm of not being associated with any of the great European dynasties. Ten years younger than his wife Anna, however, he died ten years before her.

Anna successfully supported the choice of her Swedish nephew Sigismund III. Wasa as King and Grand Duke in 1587. After his death, the Sejm elected two of his Krakow-born sons as head of state.

The Sejm during the coronation of August II.

The next two kings came from local noble families, albeit from places that no longer belong to Poland, in 1669 Michael Korybut Wiśniowiecki and in 1674 Johann III. Sobieski , who decisively intervened in the history of Europe when the Polish army and its allies defeated the Ottoman army in front of Vienna in 1683 .

With the Saxon Elector Friedrich August I of Saxony , a foreigner was elected again in 1697, who became King of Poland as August II. However, the Electorate of Saxony was weaker than Poland's five potent neighbors, Sweden, Russia, the Ottomans, the Habsburg Empire and the Kingdom of Prussia . Nevertheless, Polish politics was now strongly influenced by the neighbors and France, which was expressed in frequently changing kings: in 1704 August II was replaced by Stanislaus I. Leszczyński , in 1709 August II was able to regain power. After his death in 1733, Stanislaus I was re-elected King of Poland by one party. The other party elected August III. , the son of August II, which led to the War of the Polish Succession . After the death of August III. In 1764 , Stanislaus II August Poniatowski, a local nobleman with good connections to the Russian court of the tsars, was elected, as it turned out, the last king and grand prince of the Polish-Lithuanian republic.

Failed attempt at reform in 1658: the aristocratic republic of Poland-Lithuania- Ruthenia

In the early 17th century, Poland-Lithuania stayed out of the Thirty Years' War and expanded eastwards, with the Kremlin in Moscow (1610) and the Black Sea coast being occupied in the Polish-Russian War 1609–1618 . In the second half of the 17th century, the consequences of the Second Northern War , internal quarrels and the growing neighbors Russia and Brandenburg-Prussia increasingly restricted the power of Poland-Lithuania. The attempt to reform the state as a triune aristocratic republic Poland-Lithuania- Ruthenia failed in 1658 due to Polish resistance. Since 1697, the aristocratic republic found itself as part of the personal union of Saxony-Poland , which lasted with interruptions until 1763. In 1772 Poland-Lithuania covered 729,900 km² and had around 12 million inhabitants.

In the course of the 18th century, the Rzeczpospolita became increasingly incapable of acting and reforming due to the Liberum Veto , which made the first partition of Poland possible for the neighbors . As a consequence of this and under the influence of the independence of the USA and the French Revolution , the liberal constitution of May 3, 1791 was created . It abolished the duality between Poland and Lithuania. The remaining parts of the aristocratic republic were united in a unitary state to form Rzeczpospolita Poland . The absolutist ruled neighboring monarchies took two years later, the second partition of Poland before, and another two years later, the third and complete breakdown - not least because of the similarities of the reformed Polish constitution with that of revolutionary France. Poland-Lithuania, like other once sovereign states, disappeared from the political maps of Europe by 1918 . The Kingdom of Prussia , the House of Habsburg and the Russian Empire were involved in the partitions . 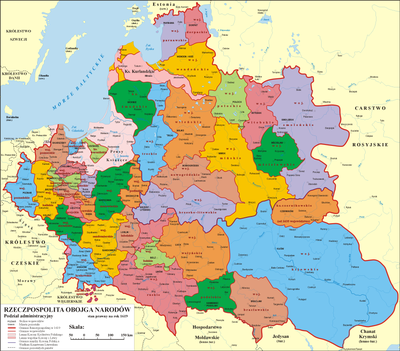 Apart from the royal free cities ( Danzig , Thorn, Elbing and Riga ) Poland-Lithuania was divided into voivodeships . The division of the area of ​​the Polish Crown into the greater provinces of Greater Poland and Lesser Poland had a purely traditional meaning. Some rulers were legally equal to a voivodship, e. B. the Principality of Warmia and the Duchy of Samogitia .

The religious diversity was unique in Europe. The spectrum of religions represented in Poland-Lithuania ranged from Judaism (in the period 1500–1578 the number of Jews rose from initially only around 18,000 to around 100,000) through Protestantism , Catholicism and Orthodoxy to Islam .

In addition to the Poles and Lithuanians, the population consisted of Germans , Latvians , Estonians , Ukrainians , Belarusians , Great Russians and Tatars . Natural population growth reached eight to nine percent in the 16th century. This was caused by the development of agriculture and improved living conditions in the 16th century, which led to a decrease in mortality. The hygienic conditions and medical care for the population have also improved.

The basis of the country's wealth was agriculture with the export of grain, cattle and forest products. Seven to ten percent of Poland's total grain production of around 1.5 million tons was exported, with the Netherlands being the main buyer with 80 percent. The grain trade ensured that the republic's foreign trade balance was mostly positive. Poland also exported potash , wool, textiles, as well as fur and leather products. This resulted in a high degree of susceptibility to economic fluctuations on the European markets. In addition to cloth, iron and steel, the imported goods mainly included metal products such as scythes, sickles and weapons. The first factories with up to 40 workers emerged in the 16th century .

The aristocratic republic of Poland-Lithuania, commonly regarded as the First Polish Republic , became the most popular historical period in Polish society in the interwar period. The Sarmatism , the ideal of a free, democratic aristocracy was mainly in the 19th century romanticized model and constitutive myth of the Polish national consciousness. The aristocratic republic of the 16th century was stylized as a liberal model, although the entire adult population could not participate in it. The formation of political will could (theoretically) encompass up to 12% of the population (the entire aristocracy), which was a lot at a time and in comparison to countries like France, Prussia, Russia or Austria in the age of absolutism from the 17th century to the 18th century Century was where this started out from a person. What is important about the legend that has formed among the population of this time is the fact that Poland was really independent during this time. The ideals of freedom that the nobility proclaimed, however, did not go well with the maintenance of serfdom . For Thomas Carlyle, for example, the aristocratic republic, in its cruel expression, was only "a gracefully phosphorescent heap of mold" and the nobles on it were "teeming parasites". In his opinion, the partitions of Poland were fair "because they made room for the superior empires of the Romanovs to the Russian Empire, the Habsburgs to Austria-Hungary and the Hohenzollerns to the Kingdom of Prussia".