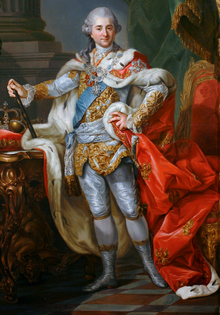 Stanisław II. August , actually Stanisław Antoni Poniatowski (born January 17, 1732 in Wołczyn , Poland-Lithuania , † February 12, 1798 in Saint Petersburg , Russian Empire ), came from the noble family of the Poniatowskis , became empress in 1764 with massive support from the Russian empress Catherine the Great to the King of Poland and Lithuanian Grand Duke elected and ruled until his abdication in 1795 as the last of the Polish kings choice. As a commissioner and strong advocate of the constitution of May 3, 1791 (the first modern constitution in Europe), he is now one of the most important enlighteners . 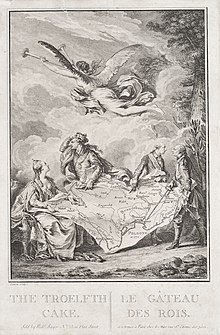 Catherine II (far left) divides Poland like a cake between herself, Joseph II and Frederick II of Prussia (far right), while Stanislaus August desperately grabs the crown (caricature Le gâteau des rois , engraved by Noël Lemire based on a model by Jean-Michel Moreau , 1773)

Stanisław August was born as the son of the Polish country noble Stanisław Poniatowski and his wife Princess Konstancja Czartoryska . His father was a long-time confidante of the Swedish King Charles XII. At the age of 20 he first appeared as a member of the Polish Diet in 1752 .

King August III. sent him to the Empress Elisabeth in Petersburg, where he met the Grand Duchess and later Empress of enlightened absolutism Katharina , whose lover he was for several years.

After August's death, Stanisław was elected King of Poland on September 7, 1764 - with massive support from the Russian side - and was crowned in Warsaw on November 25 . Already on April 5, 1764, King Friedrich II of Prussia , when Poniatowski was still holding the title of Count and was the chief clerk of Lithuania, awarded him the Order of the Black Eagle . With his election, the personal union of Saxony-Poland ended .

The enlightened ruler tried to reform the state , which had been divided into various high nobility factions. His politics were hampered by competing aristocratic parties and strong Russian influence. During the Sejms 1767/68, the nobility tried to secure their extensive freedoms and privileges against foreign policy influence. In 1768, with the Confederation of Bar, an armed group of oppositional landed nobles was formed, which was directed against the king as well as against the interference of Russia in the internal affairs of Poland, but in the long term not only accelerated the state's decline of the country, but also accelerated anarchy through the at the same time The outbreak of the Hajdamak uprising deepened. Both ended in the following years with military attacks by Russia.

According to Friedrich Melchior Grimm , he cultivated friendly relations with the French Enlightenment and representatives from the circle of encyclopedists .

Political interests of the neighboring great powers led to the signing of treaties between Prussia , Austria and Russia on the first partition of Poland on February 17 and August 5, 1772 . The Sejm and the King had to approve this decision. The king became dependent on the permanent council convened by the invaders. Nevertheless, Stanisław August Poniatowski strove to regain independence.

In the following years he joined efforts to reform the broken state. With the constitution of May 3, 1791, the first enlightened constitution in Europe was passed, which stipulated a division of powers into legislative and executive branches . The bourgeoisie, the peasants and the Jews were given new rights. Without changing its form of government, Poland became a modern constitutional monarchy .

In 1792, during the Russo-Polish War , Stanisław Poniatowski joined the Targowica Confederation , which opposed the reforms and caused the Russians to interfere again. In January 1793 the Second Partition of Poland took place on the Sejm of Grodno . Stanisław August Poniatowski was replaced by the Kościuszko government in 1794 and brought to Grodno in 1795 , where he had to sign the third division of the country after the failed Kościuszko uprising and abdicate on November 25, 1795.

After the death of Catherine, Tsar Paul I called him to Saint Petersburg, where he died on February 12, 1798 and was buried.

In 1927 the body was transferred to Wołczyn (now Belarus, then part of Poland). In 1993 it was decided to bury him in the chapel of the Royal Castle of Warsaw . The heavily damaged coffin containing the king's remains was transferred to Warsaw and buried there on February 14, 1995.

Many buildings in Warsaw still bear witness to Stanisław's rule, such as the Warsaw Royal Castle or his summer palace in Łazienki Park .

The Order of Saint Stanislaus, which he donated , was renewed in 1816 by Tsar Alexander I and awarded until 1917 as the lowest civilian order in the Tsarist Empire (from around 1870 there was also a military class “with swords”).