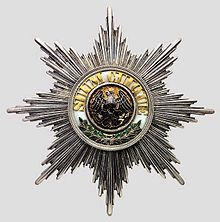 Cross of the Black Eagle Order

Collane and cross of the Black Eagle Order

The High Order of the Black Eagle was the highest Prussian order . It was founded by Elector Friedrich III. von Brandenburg on January 17, 1701, the day before his self-coronation as king in Prussia in Königsberg on January 18, 1701.

The statutes of the order dated January 18, 1701. The Black Eagle Order was not an order of merit like the Order Pour le Mérite , but initially a house order with a limited number of members. The motto of the order was " Suum cuique ". Originally, the number of Prussian medal winners, not counting the royal princes, was only supposed to be 30. Until 1848, people of non-imperial birth who were to receive the award had to prove their descent from eight noble ancestors and had reached the age of 30. With the republication of the statutes by Friedrich Wilhelm IV. On February 20, 1848, non-aristocratic knights received a coat of arms with the receipt of the insignia, which raised them to the hereditary nobility. The Prussian princes received the medal when they were born, but only put on the insignia after their confirmation and after it was republished by Friedrich Wilhelm IV. Together with their first officer's uniform at the age of ten. Women could also receive the medal, e.g. B. the Queen of Prussia and German Empress Victoria .

Prince Heinrich of Prussia (1726–1802) with the Star and Ribbon of the Order of the Black Eagle, painting by Johann Heinrich Tischbein the Elder 1769

The sign of the one-class order is a blue enameled Maltese cross with black crowned eagles in the corners of the cross. In the middle is the intertwined monogram of the founder FR (Fridericus Rex) in a gold medallion . Under Friedrich Wilhelm II (r. 1786–1797) the medallion shows the monogram FWR (Fridericus Wilhelminus Rex) . The medal could also be awarded in diamonds . 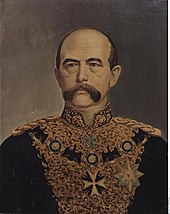 The medallion of the eight-pointed silver order star shows the black Prussian eagle on an orange background within the order's motto Suum cuique (German: "Each his own") as well as a branch of laurel. Until the middle of the 19th century, the order star was embroidered and sewn onto the uniform. From 1810, the first metal medal stars were awarded and Friedrich Wilhelm IV decreed in 1858 that only silver medal stars were to be awarded. Like the gem , the silver medal star could also be awarded with diamonds . Knights of the Black Eagle, who also knights of the English Order of the Garter were able, surround the star of the Black Eagle with the Garter.

The jewel was carried on a plain, orange sash from the left shoulder to the right hip. The orange ribbon was a tribute to the House of Orange and Frederick's Dutch mother. It also gave hope to the legacy of the childless Orange William III. of England expression.

As a special distinction, the order could be awarded with the collar (order chain) (e.g. to Otto von Bismarck , who also received the order in diamonds ). The chain is made up of two types of chain links: a black enameled eagle with golden thunderbolts in its claws and a blue enamelled ring with four royal crowns attached to its sides. Inside the circlet there is a white enamelled medallion with the motto of the order painted on it. The hoop is the medallion through the golden initial letters of the founder F R , respectively.

Fence in front of the Charlottenburg Palace

From 1861 the knights of the Order of the Black Eagle always wore the Grand Cross of the Order of the Red Eagle as a neck decoration. In the Prussian court rank regulations of 1878 , the members of the order ranked ninth after the holders of the highest court offices and the Prussian prime minister, even before the heads of the princely and formerly imperial count families .

The Masonic Lodge Black Eagle in Berlin in addition to the Order of Star of the Order's motto Suum cuique in their Bijou and commemorates the formation of Freemasonry in Prussia by Frederick II. In 1740.

The statutes stipulated that the order had to be worn daily. The first time the knight missed the obligation to wear it, he had to pay 30 Thaler, the second 100 Thaler to the Royal Orphanage in Königsberg . On the third failure, the medal was revoked.

King Friedrich II did not bestow the medal to any general who had been a prisoner of war , including the Imperial Count Friedrich Ludwig Finck von Finckenstein after 55 years of service. General Ernst Ludwig von Pfuhl was the last in 1786 to be awarded the Order of the Black Eagle by Frederick II. Frederick II sent the order to his confidante with the words written by hand: "My dear and honest lake" .

By the end of the monarchy in November 1918, the order was awarded a total of 1,341 times. In addition, there were 92 awards with diamonds. From the Prussian King Friedrich Wilhelm III. On April 7, 1805, Napoléon I , Murat , Talleyrand , Duroc , Berthier , Bernadotte and Cambacérès received the Order of the Black Eagle at the same time . The Swedish King Gustav IV Adolf , who had received the order in 1792, then sent it back in 1805 because, as a legitimate king by God's grace, he did not want to be placed on the same level as a usurper and generals of bourgeois origin.

Since 1919 the award has only been given to members of the House of Hohenzollern. 13 awards had been made by 1934. Until the death of the former Emperor Wilhelm II in 1941, the festival of the Order, July 11th (Friedrich I's birthday), was celebrated every year in Doorn . August von Mackensen was a permanent guest . 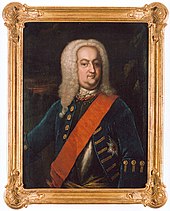 The first nineteen knights were accepted into the order on the day of the foundation. After Johann Kasimir Kolb von Wartenberg was first made chancellor of the order, the following people were knighted: