Order of the Red Eagle

This article deals with the Prussian Red Eagle Order, for the Brandenburg award see Order of Merit of the State of Brandenburg . 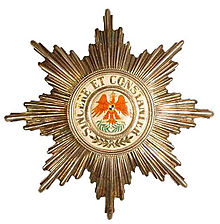 1st class breast star of the Order of the Red Eagle

The Red Eagle Order (in the 19th century Rother Eagle Order ) was a Prussian Order of Merit , which on 17 November 1705 by Prince Georg Wilhelm of Brandenburg-Bayreuth under the name Ordre de la sincérité (Order of sincerity) as a court order of knights was donated. From 1792, after the transition of the Franconian Hohenzollern areas to Prussia, the King of Prussia awarded it. The Order of the Red Eagle was now the second highest order in the Prussian state after the Order of the Black Eagle . It was awarded until the November Revolution.

The order was founded by Georg Wilhelm von Brandenburg-Bayreuth, probably based on the English Order of the Garter , which he had met on his travels. The members of the order committed themselves to always follow the order's statutes. This also included the permanent wearing of the order. However, it also served the margrave's self-portrayal, because every year on St. George's Day a gathering of all order bearers with festivities was held in St. Georgen am See near Bayreuth . A service also took place in the specially designed Sophienkirche (today Ordenskirche). The last Margrave of Brandenburg-Ansbach and Bayreuth, Christian Friedrich Karl Alexander , gave the order new statutes and the name Hochfürstlicher Brandenburgischer Roter-Adler-Orden in 1776 . When he ceded the principalities to Prussia on December 2, 1791, the order also passed to Prussia and was elevated to the Kingdom's second knighthood on June 12, 1792 by Friedrich Wilhelm II .

After the November Revolution brought the end of the monarchy, the medal was no longer awarded.

Since 1810, the order's emblem has consisted of a white enameled St. George's cross that widened towards the top . The medallion in the obverse showed the red Brandenburg eagle with a green laurel branch in its claws and in the lapel the monogram "FW" under the Prussian royal crown. The grand cross donated on October 18, 1861 by King Wilhelm I († 1888) on the occasion of his coronation in Königsberg was a St. John's Cross and had red eagles in the corners of the cross, the medallion in the obverse showed the monogram WR (Wilhelmus Rex), from the order's motto SINCERE ET CONSTANTER (sincere and steadfast) . In the reverse medallion, within an oak wreath, was the date Oct. 18. 1861 . The Grand Cross was worn on an orange sash with white stripes. The chain to the Grand Cross was awarded for special merits . The first class cross was carried from the left shoulder to the right hip on a white sash with orange side stripes. The II. Class was around the neck and the III. 1st and 4th class worn on the left chest. From 1864 the war decorations hung on the black and white ribbon. Since 1851, non-Christian knights of the order were sometimes given a silver star-shaped or round medallion with the red eagle in the middle instead of a cross.

The star of the Grand Cross was a golden eight-pointed star, in the middle of which the crowned red eagle with a sword and a scepter in its claws is painted on a medallion. The eagle bears the Hohenzollern coat of arms and around the medallion of the eagle is the motto of the order on blue enamel. The first class star is silver and resembles the star of the Grand Cross with a few changes. The eagle wears a laurel wreath instead of a sword and scepter and the motto of the order is written on white enamel. The second class was awarded with a silver four-pointed star with the medallion of the star of the first class. All three stars could be awarded in diamonds.

The chain was donated on January 18, 1861 with the Grand Cross and only awarded for special merits. It had three types of links: the first was a blue circlet on which the motto of the order was written with a crown and the monogram of the founder WR (Wilhelminus Rex) on the inside ; the second link consisted of a crossed sword and scepter in an oak wreath; the third was identical to the first except for the monogram, which was replaced by a red eagle with the applied coat of arms of Brandenburg, the golden rod of the arch chamberlain in a blue field.

There were also a large number of additions to the individual levels, some of which could be combined:

The Red Eagle Order was the German order with the most diverse degrees. In 1861 he was given a new order, the Order of the Crown , which, like the Grand Cross of the Red Eagle Order , had been donated at the coronation of Wilhelm I.

On May 18, 1842, King Friedrich Wilhelm IV ordered the creation of a silver medal of the Order of the Red Eagle, which was only awarded to non-Prussian troops. Kaiser Wilhelm I ordered a new version of the medal in 1871.

Order of the Red Eagle in the state of Brandenburg

Since 2005, Brandenburg has awarded the Order of Merit of the State of Brandenburg , also known as the "Red Eagle Order". The number of medal winners is limited to 300.