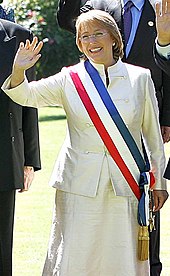 The then Chilean President Michelle Bachelet with a presidential sash . 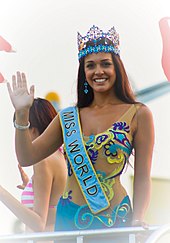 In the 14th and 15th centuries, the sash was usually worn across the body or over the right shoulder to the left hip. It later developed into a badge for warring parties . With the development of uniforms, it only distinguished officers . Later, however, it was only worn at parades and replaced by the armband in daily service .

In many Latin American countries, a sash, often in the national colors, is the insignia of the presidents. In Chile, for example, the same sash has been used since 1915, adorned with fabric tassels and a metal star at the bottom.

Sashes are now widely used in beauty pageants . They serve to award the most beautiful candidate in a competition. Sashes are also used as an accessory at hen parties.