Die Welt (spelling since 2015: DIE WLT ) is a German national daily newspaper of Axel Springer SE . Founded by the victorious powers of World War II in the British zone of occupation in Hamburg , it was first published on April 2, 1946 and was taken over by the publisher Axel Springer in 1953 .

The sheet is assigned to the bourgeois - conservative spectrum. In terms of economic policy, it is considered to be “clearly market-liberal ”. The editorial office of Welt und Welt am Sonntag is in Berlin .

The world is sold in 130 countries and appears in Nordic format . Your main competitors are the Frankfurter Allgemeine Zeitung and the Süddeutsche Zeitung . The sold circulation is 68,098 copies, a decrease of 68.8 percent since 1998.

Die Welt is a founding member of the Leading European Newspaper Alliance (LENA), in which it is currently working with the foreign daily newspapers El País (Spain), La Repubblica (Italy), Le Figaro (France), Le Soir (Belgium) as well as the Tages-Anzeiger and the Tribune de Genève (both Switzerland) collaborate on international reporting.

The world was founded by the British military government and appeared for the first time on April 2, 1946 at the price of 20 pfennigs. The concept of the newspaper was to separate facts from commentary, and in the editorials opposing viewpoints came up. Under Rudolf Küstermeier , editor-in-chief, SPD member and former inmate of the Bergen-Belsen concentration camp since spring 1946 , the paper collided several times with the British occupation authorities who wanted to use the world as a PR organ. The circulation rose to a million copies, so that there was no shortage of interested parties when it was sold in 1952. Axel Springer was awarded the contract for two million DM .

Under the first Springer editor-in-chief, the right-wing conservative Hans Zehrer (who had been in charge of the paper for a short time in 1946, but had been ousted by the British due to his past), the once liberal paper transformed into the “great national newspaper” as it was officially announced in 1965 was titled. Authors such as Ilse Elsner , Sebastian Haffner and Erich Kuby gradually ended their collaboration. For the World journalists worked as Winfried Martini , Friedrich Zimmermann and the former press officer in the Nazi Foreign Ministry Paul Karl Schmidt aka Paul Carell , who from 1958 to 1979 for the world wrote. His then employee Hans Georg von Studnitz as well as conservative writers like Matthias Walden and William S. Schlamm shaped the character of the newspaper for a short time. 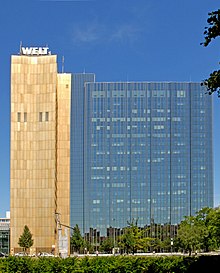 The Axel Springer House with the world lettering, 2008

During the Springer campaign during the student protests against Axel Springer in the 1960s, Die Welt was also the target of criticism. According to Hans-Peter Schwarz , Axel Springer negotiated with the Frankfurter Allgemeine Zeitung in the mid-1970s about the sale of the loss-making world , in which the world should be absorbed in the Frankfurter Allgemeine Zeitung . However, Springer is said to have decided against the sale shortly before the contract was signed.

From May 24, 2004, in addition to the conventional world , Die Welt Kompakt was published , in which the contents of the large edition were compiled on 32 pages in a smaller format. In 2007, Die Welt was in the black for the first time.

On February 15, 2010, the previous editor-in-chief Thomas Schmid took over the position of publisher and Jan-Eric Peters became editor-in-chief of all world publications. In October 2012, Axel Springer AG announced that the editorial staff of the Welt would be merged with that of the Hamburger Abendblatt before the end of the year . The new central editorial office was located in Berlin. In Hamburg there was only one local Abendblatt editorial staff.

With this new strategy, the further existence of the world seems to be up for grabs as a print version. In the event of new burglaries, the publisher wanted to take "no more life-saving measures" for the printed edition. Only the online editorial team and Welt am Sonntag are of importance . That is why the entire editorial team was geared towards the online edition. All content is published online first , which is why the editorial team must be fully staffed from early morning to late evening. The media page of the daily newspaper summarized the change as follows:

“A newspaper is printed shortly before the end of the working day, but that is more of a by-product of what was written for welt.de anyway. A hard copy for all those loyal subscribers who haven't died yet. Almost no annoying displays. "

In December 2012 Welt Online introduced a payment model: only 20 online articles per month could be accessed free of charge, a subscription had to be taken out for any additional access . On December 9, 2013, Axel Springer SE announced the purchase of the TV station N24 . The previous N24 shareholder Stefan Aust became the publisher of Die Welt on January 1, 2014 . After approval by the Federal Cartel Office in February 2014, the editorial offices of Welt and N24 were merged in order to be able to produce multimedia news. As of January 1, 2015, the joint activities were bundled in WeltN24 GmbH.

In the second quarter of 2014, 41.5 percent of the reported circulation did not go to subscribers or to street sales, but were sold as on- board copies or via special sales . The publisher receives no or much lower proceeds for this. In April 2015, Axel Springer newspaper board member Jan Bayer made a clear commitment to the future of the printed world : It should become the “leading intellectual medium” and one invested “very consistently in quality”. The Berlin local edition was discontinued on September 1, 2015. On November 29, 2015, the World on Sunday and from November 30, 2015, DIE World was switched to a new logo and branding.

On January 1, 2016, Stefan Aust took over as editor-in-chief from Jan-Eric Peters. In February 2016, a new editorial concept was presented, according to which there should be eight departments instead of fourteen. The payment model also changed from the metered model to a freemium model . Current and quickly created articles are then still freely available, background reports and detailed reports or analyzes are chargeable. For the 70th anniversary, a special edition illustrated by Udo Lindenberg was published on April 2, 2016 . On September 6, 2016, Ulf Poschardt became the new editor-in-chief.

In September 2019, Axel Springer SE announced that on December 31, 2019, Die Welt Kompakt and the Hamburg local edition would be discontinued and the sports editorial team would be dissolved. Reporting in this area is carried out by the Axel Springer SE Sports Competence Center. The print and digital editorial team should move to the new Springer building in Berlin in spring 2020.

The edition of the world was shown together with the world compact from 2005 to 2019 . In the past few years, the newspaper has lost a lot of its circulation. It is currently 68,098 copies. The number of copies sold has fallen by an average of 8.4% per year over the past 10 years. Last year it decreased by 30.7%. The share of subscriptions in the circulation sold is 68.6 percent.

The world group's Internet news portal was developed under the name Welt Online . The newspaper's website was launched in 1995 and offers an electronic newspaper archive of all articles since digitization from May 1995. A PDF full-page archive also allows you to download individual pages, selected sections (e.g. title , Germany , abroad ) or a complete issue of the numbers published since January 9, 2001.

On September 10, 2012, the website was renamed Die Welt and made the core of the publications. The aim is to achieve a uniform name appearance for all media in the world group; the exception is the newspaper Welt am Sonntag .

On December 12, 2012, Die Welt was the first national daily newspaper in Germany to introduce a payment system for its website. Since then, users have been able to access 20 articles per calendar month free of charge, after which a subscription is required when accessing another article . This costs (as of September 2013) at least 4.49 euros for one month.

After the first six months with a paywall , the General Manager of Digital Welt -Produkte (Welt Digital) drew an initial balance sheet at a conference of the Federal Association of German Newspaper Publishers . He did not give the specific number of payers; he described it as "encouraging". According to the company, the number of digital subscribers in the world as of June 30, 2013 was more than 47,000. However, the significance of the figures with regard to the willingness to pay for content on the Internet is being discussed, since the subscription was advertised and sold in combination with an iPad Mini , among other things . In June 2016, Die Welt had more than 75,000 digital subscribers. The digital newspaper Welt Edition was launched on September 15, 2015 . It is the further developed version of the previous iPad app Welt HD and the first offering to appear under the new brand umbrella Welt .

With the merger of Die Welt and N24 under the umbrella of WeltN24 , welt.de has transformed into a common news portal. The world is one of the 50 most visited websites in Germany.

Die Welt has been awarding the international WELT Literature Prize since 1999 , with which it wants to commemorate the publicist Willy Haas . The prize has been endowed with 12,000 euros since 2018 (previously 10,000 euros) and is awarded annually. The previous winners are:

Since 2010, the culture department has had so-called artist editions of the newspaper designed by well-known visual artists once a year according to their ideas. These art actions always have the title Die Welt der / des [artist name] . Until now it was

In a comparative article on the editorial treatment and moderation of reader comments, the journalist Stefan Niggemeier dealt in March 2008 in the Frankfurter Allgemeine Zeitung with the reader comment areas of several media available on the Internet. About Welt Online he wrote: "The comment areas on Welt Online are an inhospitable place - and are sometimes seen as a playground for right-wing extremists, weirdos and agitators of all kinds." In 2019, Niggemeier criticized the close cooperation between the world and Volkswagen for the May 7, 2019 edition which, among other things, made VW CEO Herbert Diess "Co-Editor-in-Chief". As a result of three complaints about this issue (one of them involving Niggemeiers), the German Press Council expressed disapproval for violating the press code .

Commons : The World  - Collection of Images