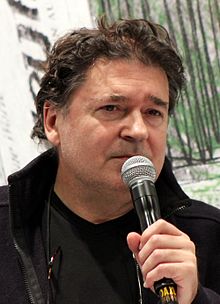 Leon de Winter (born February 26, 1954 in 's-Hertogenbosch ) is a Dutch writer and filmmaker.

Leon de Winter is the son of poor Dutch Orthodox Jews who survived the Holocaust in hiding places given to them by a group of Catholic priests and nuns for two years. Nine out of ten of his uncles and aunts were murdered in the concentration camp .

De Winter learned the German language at the Dutch school for six years. After training at the Bavaria Film Academy in Munich , De Winter studied at the Amsterdam Film Academy , which he left a year before the final exam. He published his first novel at the age of 24. Today he lives and works in Bloemendaal and Los Angeles and is married to the writer Jessica Durlacher . The couple has two children. His work includes novels , stories and scripts , some of which he wrote himself. The Hollywood sky was made into a film by Sönke Wortmann . De Winter is a regular guest author for the Axis of Good . He appears alongside Henryk M. Broder in the TV documentary The Eternal Antisemite, made by director and film producer Joachim Schroeder .

Although the art of film is the background of his work, De Winter is mainly known as a novelist. In addition, in the past he became increasingly known as a blogger and author of opinion articles with decidedly Islam-critical and pro-Israeli positions. Despite their differences, his novels, written in Dutch , often show repetitive motifs and in some cases have strong autobiographical features: De Winter's main characters, who often appear as first-person narrators, are all male and Jewish and often Dutch. All deal with their Judaism in different ways; in the novel Zionoco this takes on absurdly comical traits, in Sokolov's universe it leads the plot to Israel and leads to the plea for the Jewish state. De Winter also often deals with the relationship with an overpowering, unreachable and unloved father, for example in the novel Supertex . De Winter likes to illuminate the game of the sexes and often works with the problems that arise for his main characters from the tension between marriage, loyalty, lust and sex. De Winter's novels show a very lively choice of words, often taken from everyday language, which, for example, also uses drastic expressions in the novel Hoffman's Hunger . He also often uses Yiddish sprinkles. Ulrich Greiner's verdict on the novel A Good Heart (2013): “Seldom has one read such an exciting, intelligent and explosive book.” With Jessica Durlacher, De Winter wrote the libretto for the musical production Anne , which will take place on May 8, 2014 in the Amsterdam Theater Premiered.

The director Theo van Gogh accused De Winter of “marketing his Judaism” and attacked him violently with anti-Semitic remarks since 1984 .

In an interview with Die Welt , De Winter said that he had once resolved to "drink a good glass of wine to the news of Theo van Gogh's death". For him he has always been “a disgusting person”. Van Gogh had written in a widely read Amsterdam student paper that De Winter and his wife could only sleep together "if they had barbed wire wrapped around his penis". He would then “at the height of 'Auschwitz! Auschwitz!' call". De Winter's wife's father is an Auschwitz survivor. Van Gogh had deliberately insultingly and untruthfully claimed that de Winter was collecting barbed wire from concentration camps.

“What was fascinating about such attacks was the deep silence in the area. Nobody in the editorial office of the Studentenblatt noticed what van Gogh was doing. In all these years support had practically only come from Jews; the colleagues remained silent with a few exceptions ”.

Opinions on Islam and Islamism

In an interview in the news magazine Der Spiegel with Henryk M. Broder , De Winter defended the use of non-constitutional means in dealing with Islamist terrorists, such as the torture of prisoners in Guantánamo . In the sense of a “new totalitarianism ” he said in an interview: “After the left fascism of the Soviets , after the right-wing fascism of the Nazis , Islamism is the fascism of the 21st century.” De Winter expressly welcomed the Iraq war .

In an article in Die Zeit , he sees a lack of harmony in the Netherlands between Islamic ideas of respect, honor and shame and Western values: The increasing " self-liberation " of women of North African origin in the Netherlands is seen as a loss of power and a threat to the honor of their male relatives . De Winter finds it remarkable that most Dutch Muslims would not have accepted Van Gogh's murderer as a pious Muslim, but rather branded him a heretic , thus wanting to rid themselves of all moral responsibility by distancing themselves.

In his blog called The Free West on welt.de he wrote on current political topics ( foreign and security policy , especially the topics of terrorism and Islamism). 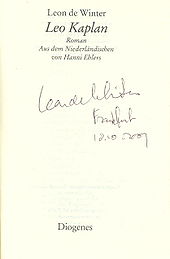