from Wikipedia, the free encyclopedia
This is the spotted version , flagged on August 3, 2020 . There are 2 pending changes that have yet to be viewed. 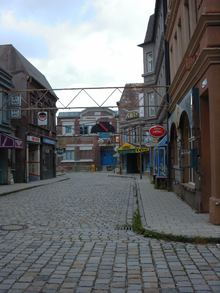 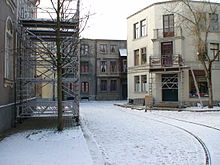 The Bavaria Film GmbH is located in the northeast of Green Forest in the district Geiselgasteig in the district of Munich . It is one of the leading production and service companies in the German film and television industry. The site covers around 30  hectares . Bavaria Film GmbH is organized as a management holding company and is active in four business areas - Content, Rights & Distribution, Studios & Services and Real Estate.

Bavaria Film goes back to Münchener Lichtspielkunst AG, which emerged on January 1, 1919 from Peter Ostermayr's company Münchener Lichtspielkunst GmbH . The new stock corporation became known under the name "Emelka" after the abbreviation "MLK". In June 1919, Ostermayr acquired a large site in Geiselgasteig, in the south of Munich, on which extensive film studios were gradually being built .

As a reaction to the founding of the UFA , the Emelka was expanded into the "Emelka Group" from 1920. Other companies and cinemas were incorporated, and in 1921 the group acquired its own copier, Süddeutsche Filmwerke Geyer .

From September 24, 1930, Emelka produced not only the films but also a newsreel with audio, the "Tönende Emelka-Wochenschau". Because their theater chain could not financially cope with the conversion to sound film, Emelka had to file for bankruptcy in November 1932.

The Geiselgasteiger film site was bought by Wilhelm Kraus, who had already bought a large part of the Emelka shares in October 1930 and founded Bavaria Film AG on September 21, 1932.

After the National Socialist seizure of power in January 1933, a number of long-time Emelka employees left the country, including the directors Ewald André Dupont , Karl Grune , Max Ophüls , the cameraman Franz Planer and the actors Therese Giehse , Kurt Horwitz and Fritz Kortner .

After Bavaria got into trouble in 1936 and had to stop its payments in the spring of 1937, "Bavaria Filmkunst GmbH" was founded on February 11, 1938 with political support from Berlin. The shareholders were the Cautio Treuhand and the Allgemeine Film-Treuhand (AFT), a company owned by the Reich, which held its shares in trust for the Cautio, but ceded it to the Berliner Film Finanzgesellschaft on February 19, 1941. The production facilities remained in Munich, but the company was now controlled from Berlin.

On January 10, 1942, Cautio also ceded its Bavaria shares, and Film Finanz, which now owned all the shares in Bavaria Filmkunst, was simultaneously converted into Ufa-Film (UFI) . In the state-owned monopoly group UFI, Bavaria only had formal independence from 1942 on.

Managing directors or heads of production at Bavaria were u. a. Hans Schweikart from 1938 to 1942, Erich Walter Herbell, Helmut Schreiber and Helmut Keil. Production group leaders were u. a. Hans Abich , Fred Lyssa , Oskar Marion , Ottmar Ostermayr , Ernst Rechenmacher and Gerhard Staab .

The Bavaria Film studios, which remained undamaged during the war, were subordinated to the American Army on May 10, 1945 , which initially forbade Bavaria Filmkunst from any production activity of its own. Only the copy shop, which also set up a color department in 1952, and the dubbing studio were allowed to continue operating and soon resumed their work. A distribution company - Allgemeine Filmverleih, or AFI for short - was founded on the film grounds.

The American military government had, however, allowed Bavaria Filmkunst to rent out its studios to other production companies. So without direct involvement of Bavaria u. a. Films like 1947 Between Yesterday and Tomorrow by Harald Braun by the Neue Deutsche Filmgesellschaft, 1948 Untitled film by Rudolf Jugert , Camera, Der Herr vom other Stern by Heinz Hilpert , Comedia, Der Apfel ist ab by Helmut Käutner , Camera, 1949 Hallo Fräulein ! by Rudolf Jugert, Camera, 1950 Beloved Liar by Hans Schweikart , Camera, Das doppelte Lottchen by Josef von Báky , Carlton, 1952 Illusion in minor and at night on the streets by Rudolf Jugert, 1952/53 mask in blue , a color film by Georg Jacoby , Röja-Film, 1953 Jonny saves Nebrador by Rudolf Jugert, Meteor, 1953/54 Sauerbruch - That was my life by Rolf Hansen , Corona, 1954 Lola Montez by Max Ophüls , Ludwig II. By Helmut Käutner, Aura and 1955 I think often to Piroschka by Kurt Hoffmann the Georg-Witt-Film.

In 1949 Bavaria also resumed its own production operations. With the exception of the debut film - The Strange Story of Kaspar from Brandner  - only short documentaries were produced until 1960 . In 1950 Peter Ostermayr founded his own company, the Munich-based “Peter Ostermayr Filmgesellschaft”.

The reprivatisation of Bavaria was preceded by lengthy complications. The Allied High Commission put the company up for sale, which the Federal Government felt disappointed about, as it had shortly beforehand, with the approval of the Commission, prepared a draft law that was supposed to put the unbundling of Ufi assets in federal hands.

The reprivatisation and renaming of Bavaria in “Bavaria Filmkunst AG” finally took place in February 1956. The shareholders were Süddeutsche Bank, Commerzbank , Credit-Bank, Agfa , the new German film company and the Schorcht distributor. In 1957 the new Bavaria acquired Schorcht-Verleih and on June 15, 1958, renamed it "Bavaria Film-Verleih".

On August 1, 1959, the studio was resurrected with the establishment of "Bavaria Atelier GmbH". In addition to Bavaria Filmkunst, the new shareholders were the SDR subsidiary Rundfunkwerbung Stuttgart and the WDR subsidiary Westdeutsche Werbefernsehen Köln. The entry of Bavaria into the production of television films, series and shows is of central importance. Under the new managing director, the former television director of the SDR, Helmut Jedele , many talents such as Michael Pflegehar , Oliver Storz or Franz Peter Wirth came to Geiselgasteig. The new school kicked off in 1959/60 with the television play "The Imaginary Sick" by Michael Kehlmann . Popular successes were The Marika-Rökk-Show , Hotel Victoria with Vico Torriani and the science fiction series Raumpatrouille Orion .

Under Jedele's leadership, Bavaria Film developed into the largest German television supplier and an internationally recognized film studio. Billy Wilder chose “Bavarian Hollywood” as the filming location twice : in 1961 with Eins, Zwei, Drei and 1978 with Fedora . Jedele produced the Robert Aldrich film “ The Ultimatum ” and “Deep End” by Jerzy Skolimowski . History was also made in the television sector - with productions such as “ Tatort ” with Commissioner Horst Schimanski , “ Das Blaue Palais ”, “ Aufachse ”, “ Berlin Alexanderplatz ” by Rainer Werner Fassbinder , “ Der Fahnder ”, “ Rote Erde ” and “ Marienhof ” ". From 1990 onwards, the company also produced a considerable amount for private broadcasters such as RTL, including the show "Gottschalk". In 1965 the film site in Geiselgasteig became the property of Bavaria Atelier, which since then has also been producing its own feature films, the most successful of which was " Das Boot " from 1979/81.

On August 3, 1987, the "Bavaria Atelier" was renamed "Bavaria Film". In 1997, "Bavaria Media" was spun off, which today operates the group's national and international rights and licensing business. On February 1, 2007, the television production business was outsourced to Bavaria Fernsehproduktion (today: Bavaria Fiction). Since then, Bavaria Film has acted as the group's management holding company. The following subsidiaries belong to the Bavaria Film Group today:

With Bavaria Filmstadt, Bavaria Film operates a popular tourist attraction on the studio premises in Geiselgasteig.

Further films in the Bavaria Studios

Visits and guided tours are possible as part of Bavaria Filmstadt .

Bavaria Film is one of the founders of the New German Cinema Award , formerly the German Film Award , which is awarded annually at the Munich Film Festival in the categories of directing, screenplay and acting .