The hectare or hectare , in Swiss the hectare ( singular ), is a unit of measurement of the area with the unit symbol ha . It is mainly used in agriculture and forestry and corresponds to an area of ​​10,000 m², for example a square field with a side length of 100 meters.

The hectare or hectares is a legal unit in Germany, Austria and Switzerland .

The word hectare is borrowed from French and is based on the Greek hekatón 'hundred' (in the form of composition hecto- adapted from French ) and French are (from the Latin ārea 'area').

In 1879 the hectare was included in its recommendations by the CIPM (Comité International des Poids et Mesures). Even before that, the hectare was part of the order of weight and dimensions of the North German Confederation of 1868. On January 1, 1872, it came into force throughout Germany.

Since the late 19th century, one hectare corresponded to exactly four acres in the German Empire , which is why it was also called quarter hectare (vha) to distinguish it from traditional dimensions. 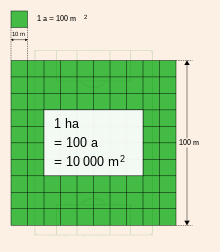 Illustrative definition of hectares and ares, with a football field in the background for size comparison

One hectare is equivalent to 10,000  square meters or 100  ares . A square with an area of ​​1 hectare has a side length of 100 meters (1  hectometer ). One hectare therefore corresponds to one square hectometer (hm²).

The hectare does not belong to the International System of Units (SI), but it is approved for use with it. The hectare is a legal unit in Germany and Austria as well as hectares (singular), hectares (plural) in Switzerland , but limited to the indication of the area of ​​land and parcels. According to the EEC guideline 80/181 / EEC , “hectare” is just a special name for one hundred times Ar, formed from the prefix hecto for 100 and the unit name Ar.

Use with SI prefixes

The German unit and time law sees Ar (unit symbol: a) and hectare (unit symbol: ha) as independent units and allows the use of SI prefixes for both . Thus, in Germany, formations such as hectares (ha) and z. B. Centihectar (cha) legal but uncommon. The unit symbol ha does not indicate whether it refers to hectares or hectares , which does not make any difference, since in both cases 10,000 m² is described.

In agriculture, the term hectare yield is often used , meaning the amount of harvested material (for example grain or wine) from the area of ​​one hectare.

SI units
Statutory non-SI units
Non-SI units that have already been approved by the BIPM for use with the SI are not listed here.