The metric carat is not an SI unit , but is a legal unit in the states of the EU and Switzerland . It is also described in DIN 1301-1 . The carat has no legal unit symbol; in Germany the symbol "Kt" is common, in Switzerland and Austria "ct" is defined as the unit symbol. 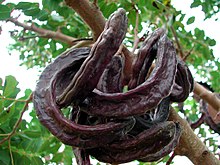 Curved legumes of the carob tree

The carat is a loan word from the French le carat from the medieval Latin carratus . This originated from the Arabicقيراط / qīrāṭ from the ancient Greek κεράτιον kerátion ( diminutive of κέρας kéras , German 'horn' ), since the fruit (pod) of the carob tree is crooked. The seeds of these fruits were often used as weights in the past. Allegedly this was due to their uniform size and weight, averaging 0.2 g. However, a study from 2006 refutes this uniformity of these seeds. According to the study, the seed mass, like that of other seeds, scatters in the range of 25%, whereas different carat figures worldwide differed by only 5%. However, test persons had the ability to recognize differences in weight of two seeds of 5%, which is why it is assumed that in addition to the seed as a unit of weight, the human ability to assess their uniformity also played a role. 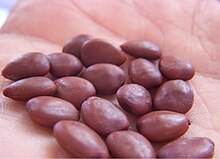 Grains of the carob tree

Until the beginning of the 20th century, the carat was defined differently from country to country. In order to create uniformity and to get a "smooth" value in grams, the metric carat (Carat métrique) was defined with its current value in 1907 .