International Bureau of Weights and Measures

Building of the BIPM in Saint-Cloud , France 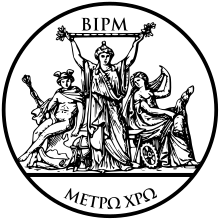 Original logo of the BIPM

Internationales Bureau for Weights and Measures ( IBMG ) is the German name of the Bureau International des Poids et Mesures ( BIPM ). The BIPM is an international organization with the task of providing a worldwide uniform and unambiguous system of measurements based on the international system of units .

The BIPM was founded together with the conclusion of the Meter Convention on May 20, 1875 and works under the supervision of the "International Committee for Weights and Measures" ( CIPM ). It is located in the 'Pavillon de Breteuil' in Sèvres near Paris , France . The General Conference on Weights and Measures ( CGPM ) takes place every four years , at which the central issues of the BIPM are decided.

In order to ensure the uniformity of the system of measurements and units, the BIPM coordinates the representations of the unit standards of various national metrological institutes ("National Metrological Institute"; in short: NMI). The SI second is based, for example, on an atomic natural constant. Worldwide several time institutes represent the SI second with the help of atomic clocks , the BIPM takes over the comparison of these representations. For units that are defined by a physical Normal (or were), the BIPM is also responsible for storing the reference body, for example of the kilogram standard ( original kilogram ) in the form of a platinum - iridium thrustor or of up to 1960 meters Normal ( Urmeter ) used platinum-iridium rod.

The International Committee for Weights and Measures (French: “Comité International des Poids et Mesures”; short: CIPM ) is composed of 18 people from different countries that have joined the Meter Convention . The CIPM meets annually at the BIPM.

The International General Conference on Weights and Measures (from the French: "Conférence Générale des Poids et Mesures"; short: CGPM ) is the highest organ of the Meter Convention . It takes place every four to six years and includes delegates from all signatory states. The first conference took place in 1889. There, meters , kilograms and seconds were defined as international base units (comparable to today's SI units ).