The title of this article is ambiguous. Further meanings are listed under Saint-Cloud (disambiguation) .

Pieter Rudolph Kleyn: View of the Park of Saint-Cloud, around 1800

Saint-Cloud [ sɛ̃ˈklu ] is a French commune with 29,973 inhabitants (as of January 1, 2017) west of Paris in the Hauts-de-Seine department, Île-de-France . The inhabitants are called Clodoaldiens .

The distance to the center of Paris is approximately 10 km. The population, like those in Neuilly-sur-Seine and Boulogne-Billancourt , is among the wealthiest in France. Numerous public figures live in the city.

In the north, Saint-Cloud borders on Suresnes , in the east the Seine forms the border with Boulogne-Billancourt and the Bois de Boulogne , which belongs to Paris , in the south lie Sèvres , Ville-d'Avray and Vaucresson , in the west Rueil-Malmaison and Garches .

At the beginning of the Middle Ages, the monk Chlodoald ( Fluduald ), a grandson of Clovis (French: Clovis) and Chrodechild (Clothilde), founded a monastery (Sanctus Fludualdus) in a novelty near Paris.

Saint-Cloud became famous for its park and its castle , built in the 1570s . It was occupied by Prussian troops on September 19, 1870 during the Franco-Prussian War . On October 13, it was shelled by the batteries of the defenders of the city of Paris stationed on Mont Valérien and burned down.

Between 1882 and 1987 there was an École normal supérieure in a preserved outbuilding of the castle , at which the historian Golo Mann also taught as a German language lecturer between 1933 and 1935 .

The seat of the aviation group Dassault Aviation with around 3,000 employees is located in Saint-Cloud . Saint-Cloud is also the headquarters of the textile service group Elis , which employs around 48,000 people worldwide. porcelain production started in Saint-Cloud under the sun king Louis XIV. 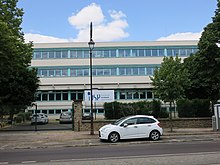 The International German School Paris , a German school abroad, is located in Saint-Cloud .

Saint-Cloud is twinned with

People related to the city:

Commons : Saint-Cloud  - collection of images, videos and audio files
Municipalities in the Arrondissement of Nanterre