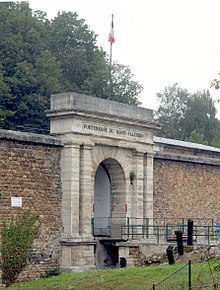 Entrance gate to the fortress

The Mont Valerien with 162 meters one of the highest hills in the Ile-de-France and 1840/44 as part of the animal's fortification scale fortification in Suresnes , 12 km west of the French capital Paris . The fortress was an important base of the French army during the siege of Paris in the Franco-Prussian War in 1870/71 . During the Second World War , it was the place of execution for the German occupying forces from 1941 to 1944 .

The hostages and the (condemned) resistance fighters were locked up in a small chapel before the execution, from which they were then led to the actual execution site within a small basin.

So far, a database includes 1014 victims who were shot at Mont Valérien during the war and buried in various cemeteries, mostly in Paris. The number officially stated at the beginning of 4,500 executions was later revised. Among other things, the following were executed on Mont Valérien:

Today military cemetery is located at the Mont Valerien alongside a US (1541 Buried), the Combat Aunt Memorial de la France in the status of a French national memorial that (the anniversary of the so-called. On June 18, 1960 June 18 appeal later) by the President General Charles de Gaulle was inaugurated with the transfer of the remains of 16 resistance fighters.

The openly visible part of the monument consists of a large square, at the front of which a 100-meter-wide wall made of red sandstone nestles against the outer wall of the fortress. On the left and right, bounded by 8 square bronze plates (buttons), on which different artists depict various themes of war, suffering, resistance and hope, there is a 12 meter high Lorraine cross and two doors, behind which there is a small exhibition chamber and a Room in which - according to the buttons - 16 coffins are lined up around a sculpture, the flame (of resistance). Between the cross and the forecourt, an eternal flame similar to the one at the Arc de Triomphe burns , bedded on an iron flag.

The chapel, not far from the actual place of execution, is accessible, wall scratches still bear witness to the people imprisoned there. Next to her is a small exhibition room with letters and the like. a. of the executed, the actual memorial is a bell placed in front of the chapel with the names of the executed.

The place of execution itself, with a memorial stone reminiscent of a grave slab, a small basin about 100 meters from the chapel, is considered sacrosanct and may not be entered by visitors - with the exception of the relatives of the executed - but is surrounded by an elevated path.

The chapel. There are five execution stakes on the left

The path that the prisoners had to follow in the direction of their execution is now called the Parcours des fusillés (path of the shot dead). The square in front of the Mémorial has been named after the German Abbé Franz Stock since 1990 . He was the pastor of the prisons in Paris and the place of execution on Mont Valérien during the National Socialist occupation, and numerous executed persons are mentioned in his diaries.

Every year on June 18, there are commemorative ceremonies, at which the incumbent president signs himself in the memorial's golden book, which is kept at the foot of the memorial together with de Gaulle's foundation documents.