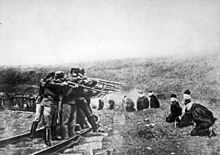 Execution of Serb civilians during World War I.

Execution of Soviet partisans by a firing squad of the Wehrmacht

A shooting , formerly also known as a fusilation or fusillade (from French fusil , rifle), is the execution of a prisoner or the execution of a death sentence through the use of firearms . In the language of the soldiers , this type of execution is also called "standing on the wall".

As a method of execution, shooting has been and is carried out in several ways.

Shot by the peloton 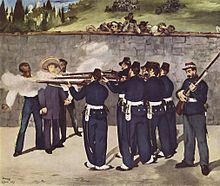 Manet: The shooting of Emperor Maximilian of Mexico 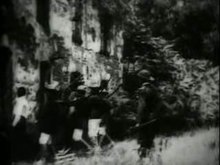 Usually the death row inmate is placed against a wall or tied to a stake. Often you blindfold him, but some refuse to do so. Official shootings are carried out by several shooters ( peloton ). Sometimes some rifles in the peloton are loaded with blank cartridges instead of live ammunition . This is intended to ease the shooter's conscience, as it means that they cannot be sure that they have fired one of the fatal shots. An experienced shooter can clearly see the difference in shooting behavior and recoil.

Often after the volley of the peloton, the executed people are given a so-called “ coup de grace ” from a very short distance , which usually causes immediate death. 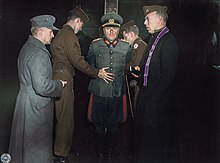 Anton Dostler immediately before his shooting. On the right in the picture a military chaplain reading to him from the Bible on the way .

Shootings in this form are considered "dignified" according to the soldier's code of honor, which is why they are usually denied to war criminals , often also spies . Sometimes the convicted person is accompanied by a clergyman or a military chaplain before and during the execution . As a mode of execution for death sentences imposed on civilians, shootings are rare; they were carried out in times of war under military criminal law and under martial law ("professional shooting"). An exception to this rule is the practice in Bavaria between July 12, 1919 and April 1, 1924. During this period, all death sentences imposed by the people's courts - including those for criminal crimes - were carried out by pelotons of the military or the state police .

The first officially known photo of this form of execution was taken in Mandalay, Burmese, in early 1886 . The English military photographer Willoughby Wallace Hooper used the new technology of highly sensitive glass plates to capture the faces of delinquents the second before their death with a short exposure time. This photo caused a scandal.

During the Nazi dictatorship, military death sentences were carried out by shooting between 1934 and 1945. For this purpose, up to twelve soldiers were called in, whereby superiors were supposed to fall back on teams that were conspicuous in terms of discipline. In special units consisting of soldiers with a criminal record ( probation battalions ) those sentenced to death had to be shot by their own comrades. When in 1944 stand courts increasingly replaced the regular military courts, the - then immediately enforceable - death sentences were also carried out by hanging. Those who were shot or hanged as a result of court judgments were isolated from autumn 1944, then extensively from February 1945 - put on public display and provided with a notice on which the reason for the sentence was written down in mostly abusive words.

Shot in the neck

Another type of shooting is shot in the neck, where a firearm is held directly to the neck of the convict. A similar method of shooting was carried out in German concentration camps in so-called neck shot systems . Even today z. B. Belarus executed the shot in the neck (see capital punishment in Belarus ).

Shooting as a method of execution is common in some parts of the world.

The US state of Utah recognized shooting alongside lethal injection as an alternative to carrying out the death penalty until 2004. The convict could choose between the two types. Now the execution by shooting may only be selected by those perpetrators who were convicted before the cut-off date of 2004. Gary Gilmore , the first convict to be executed after brief suspension of the death penalty in the United States in 1977, was shot dead. In 1996, John Albert Taylor chose this method. Most recently, Ronnie Gardner decided against lethal injection in 2010 and was executed by shooting in Utah State Prison at midnight local time on June 18 of that year . He was able to do this because he had been sentenced before that date. Today, apart from Utah, only Oklahoma allows this type of execution, but only if execution by lethal injection is not possible for any reason. The use of this method of execution in Utah, and earlier in the northern adjacent Idaho, declared himself from the former Mormon tradition of so-called " blood atonement " (blood atonement) , after also serious crimes than atoned and adjusted here on earth were (so that the criminal had no further punishment to fear in the afterlife ) if he consented to the shedding of his own blood .

The unexpected close shot was the only method of execution in the GDR from 1968 until the legal abolition of the death penalty in 1987 . Initially, from 1952, death sentences were mainly carried out using the guillotine. From 1968 onwards, all executions were carried out by the so-called "close-up shot in the back of the head", which happened in the central execution site of the GDR in the prison in Leipzig in the building of the former royal district court . The shooting of the sex offender and multiple child murderer Erwin Hagedorn on September 15, 1972 was the last execution of a civilian in the GDR. On June 26, 1981, State Security Captain Werner Teske was sentenced to death in the GDR for espionage. The corpses of those executed were brought to the nearby Südfriedhof in the greatest of secrecy and anonymously burned. There are no names in the crematorium books, only the comment "Anatomy". The ashes were buried anonymously. 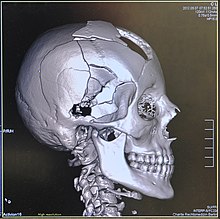 Depending on the region of the body into which the bullet penetrates, the person who is shot dies of a pericardial tamponade or a hemothorax , a vasovagal syncope , a shock situation , bleeding to death or a total depolarization of the cranial nerves . The wound ballistics is a discipline of forensics examined the above circumstances, inter alia, in more detail.