This article is about espionage in the real sense. For the film of the same name by Franz Antel from 1955 see Espionage (film)

Under espionage that is hidden, carried out with intelligence agents understood procuring and Erlangen unknown information or secret knowledge. In a broader sense, the term espionage is used for actions by states, their special organizations, political groups, e.g. B. Resistance movements , individuals and business enterprises understood. The information obtained is then used in one's own economic , political , military sphere of influence or to fight real or supposed opponents. A person who spies is called a spy . 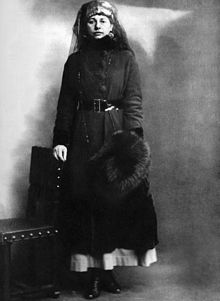 The beginning of espionage by special intelligence services in Germany goes back to around 1866/1867 under Major Heinrich von Brandt, the head of the temporarily established military intelligence office of the Imperial General Staff. This was then briefly dissolved again in 1873 after the end of the Franco-German war for reasons of efficiency. With the cabinet order of May 24, 1883, Prussia was determined to make the collection of news and statistical material about foreign armies a permanent task.

At the turn of the century, there were already 17 military intelligence services in Europe. These included: in the United Kingdom the Secret Intelligence Service , the Security Service , the Russian military intelligence service of the tsarist army, which emerged from the Ochrana , the Austrian kuk registry office and others . The Russo-Japanese War of 1905/1906, which already contained some essential elements of the later First World War, was of particular importance for the development and clearer qualification of secret service work. The first significant espionage activities existed long before the outbreak of the First World War . In the years 1907 and 1908 alone, 66 people were arrested in Germany on suspicion of espionage and 12 of them were judicially convicted of espionage.

Long before the Second World War, the relevant institutions of the Reichswehr Ministry in Germany, such as the Abwehr , the OKW, the Foreign Office, the NSDAP Security Service (SD), the Political Police, the Gestapo , and the Reich Main Security Office (RSHA) were preparing specifically for the intelligence service his opponents, combating them but also defending against hostile espionage activities. In the years between the First World War and the Second World War, there were over 80 intelligence service organizations of various structures and political orientations on German territory alone. In addition to the classic espionage activities, the rapid technical progress, the activities in the area of ​​electronic surveillance and the cryptographic progress of the Government Code and Cypher School (GC & CS) were of particular value. As early as the 1920s, institutions were established that were responsible for intercepting and decrypting foreign communications. The Double Cross System of the Security Service, which fed each other with false information, the secret service monitoring of letter, telegram and radio services as well as the work of photographic aerial reconnaissance. In addition, the actions of the “Special Operations Executive” (SOE), which were often highly dangerous for the people involved, targeted espionage and sabotage in the enemy camp.

The Cold War saw massive mutual espionage between the United States and its allies on the one hand and the Soviet Union and the People's Republic of China and their allies on the other. In particular, the secrets surrounding the construction of nuclear weapons and military reconnaissance were subjects of mutual interest.

Radio links to and from West Berlin as well as within West Germany along the inner German border were systematically tapped by listening posts from the Ministry for State Security and the military reconnaissance of the National People's Army of the GDR. In the German Democratic Republic, the role of employees of the Eastern intelligence services as "scouts of peace" was set apart and differentiated from Western spies for propaganda purposes.

In addition to espionage with the aim of gaining industrial and military-technical secrets by states, there are also, in individual cases, espionage activities by private organizations, in particular commercial enterprises.

Even today, communication channels such as satellites , fiber optics , directional radio and cell phone connections are monitored and spied on by secret services. This also applies to friendly states.

After the collapse of the Eastern Bloc , information gathering by means of intelligence services was primarily aimed at combating proliferation , illegal drug trafficking and terrorism , although industrial espionage is becoming more and more important.

According to a ruling by the Federal Administrative Court in May 2018, the Federal Intelligence Service may continue to access large amounts of data at the DE-CIX Internet node in Frankfurt am Main .

Business enterprises that engage in espionage or have access to information obtained by the intelligence service gain an economic advantage over their competitors because they can exploit third-party research results without having to conduct independent research. Spying is also used, for example, to be able to undercut a competitor in tenders.

When recruiting nationals of foreign powers for espionage, four motives are identified in research, which are described with the English acronym MICE (English mice):