The German Commercial Internet Exchange ( DE-CIX , pronunciation : [ ˈdeːˌkiks ]) is an Internet node in Frankfurt am Main and the largest in the world in terms of data throughput . All national and international DE-CIX activities and companies are brought together under the umbrella of DE-CIX Group AG. Harald A. Summa , Sebastian Seifert and Ivo Ivanov are the board members responsible for global business. The supervisory board of DE-CIX Group AG consists of Felix Höger - former COO & CTO of QSC AG and founder as well as long-time CEO of PIRONET NDH AG as chairman of the supervisory board, Klaus Landefeld, deputy chairman of the board of eco - Verband der Internetwirtschaft e. V. and Rudolf van Megen, chairman of the board of the German ICT & Media Institute eV (GIMI) as well as founder and long-time CEO of SQS Software Quality Systems AG.

The DE- CIX was founded in 1995, among others by Arnold Nipper , and was originally a project of three Internet service providers (ISPs). The eco Verband der Internetwirtschaft e. V. In the meantime, the commercial activities of DE-CIX have been transferred to DE-CIX Management GmbH, based in Cologne , a wholly-owned subsidiary of the eco association.

According to its own information, DE-CIX handles a large part of the German peering traffic and is the fourth Internet node in the world after connected ISPs and the largest Internet node in terms of traffic volume (as of April 2019). In 1999 DE-CIX moved to a new data center operated by Interxion on Hanauer Landstrasse in Frankfurt am Main . In 2012, the technical infrastructure of DE-CIX Frankfurt had a star-shaped topology and is operated by e-shelter , Equinix , Level (3) , ITENOS , Interxion, New Telco , Telecity Group (now Equinix), Global in a total of 32 data centers Switch, Keppel DC, Maincubes and Telehouse distributed in the Frankfurt city area. The largest move in DE-CIX history took place in 2018. Around 15 kilometers of fiber optic cable were laid and the connections of 450 customers migrated during ongoing operations. The new location is on the Kleyerstraße campus in Frankfurt-Gallus. 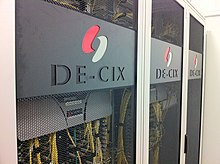 In April 2001 the DE-CIX 2 went into operation in order to solve the space problems in the old data center and to increase the reliability. The new and old locations were connected by fiber optic cables. The increasing Internet traffic and the requirement for further reliability made it necessary to put a third DE-CIX node into operation in January 2004, which was installed at the Telecity Group in Gutleutstrasse in Frankfurt am Main. At all three sites stood until the end of 2006 in each case a switch of the type Cisco Catalyst 6509-NEB-A. Then the switches were replaced by the new TeraScale E1200 from Force10 and a fourth DE-CIX node in Kleyerstrasse was put into operation at the same time. The old Cisco hardware has since been used in the WORK-IX in Hamburg, which is also operated by DE-CIX Management GmbH . In the 1st quarter of 2009, the two Force10 switches in the DE-CIX core network were replaced by Brocade (formerly Foundry Networks ) MLX-32 switches. In order to meet the need for further expansion, from the end of 2009 the TeraScale E1200 was replaced by the ExaScale E1200i from Force10. In April 2013 DE-CIX announced the development of DE-CIX Apollon. This consists of an optical network based on ADVA FSP3000 and Nokia 7950 XRS. The platform offers 100 Gigabit Ethernet ports and has been available since September 1, 2013. At all DE-CIX locations (except UAE-IX in Dubai and Mumbai IX), customer networks are protected from DDoS attacks by blackholing . Since March 21, 2019 - the world's first Internet node - 400 Gigabit Ethernet ports have been offered.

DE-CIX has been using the world's first patch robot since 2018. The machine takes over the plugging of cables fully automatically so that no technicians are required on site to set up new connections. The DE-CIX robot was recognized as the best Internet exchange innovation at the Global Carrier Awards in 2018. According to the operator, around two thirds of the capacity is made available to customers, the rest of the available capacity is used for redundancies and to buffer short-term fluctuations. 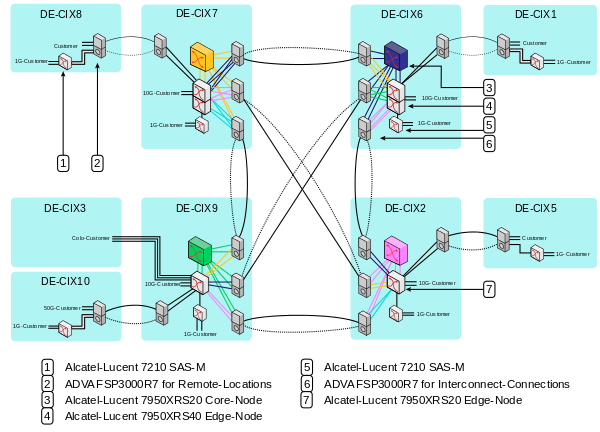 The Internet node is housed redundantly in several data centers in Frankfurt am Main . The individual current locations are:

In addition to Frankfurt, DE-CIX currently operates exchange points in Berlin (DE-CIX powered by BCIX ), Düsseldorf, Hamburg and Munich. Outside Germany, DE-CIX operates Internet nodes in Dallas, Dubai (UAE-IX), Istanbul, Madrid, Marseille, Mumbai (Mumbai-IX powered by DE-CIX), New York and Palermo. In autumn 2018, DE-CIX announced the opening of its location in Lisbon. The company has also been represented in Moscow (MSK-IX powered by DE-CIX) since October 2018. In the first quarter of 2019 DE-CIX announced the expansion of its presence in India. The joint venture DE-CIX Interwire Internet Services Ltd. Open three new locations in Delhi, Calcutta and Chennai under the DE-CIX brand.

Due to the general restrictions during the COVID-19 pandemic , data traffic at DE-CIX increased by a further 10% from the beginning / mid-March 2020, the video communication area even increased by 50%, the gaming area by 25%, and there was Increases in social media views and VPN connections .

In the course of the revelations in the years 2013–2015 on the work of the National Security Agency (NSA) and the Federal Intelligence Service (BND), the DE-CIX came increasingly into focus, as it was assumed that the NSA was divulging data there directly. However, this is "technically impossible", according to the DE-CIX operators. However, it is likely that the NSA, with the help of the Foreign Intelligence Surveillance Act , will oblige American network providers that are connected to the DE-CIX to carry out the surveillance measures.

Klaus Landefeld, Advisory Board of DE-CIX Management GmbH, reported to the NSA investigation committee on March 26, 2015 about the practice of the BND on DE-CIX since 2009, since after the end of Operation Eikonal in 2008, the BND new options for monitoring the Internet was looking for. Landefeld explained that the BND is not only interested in lines outside of Germany, such as in the Arab region, but also in lines within Germany, on which over 90 percent of traffic is protected by fundamental rights . One could “absolutely not selectively” decide what “is German or not” on the Internet. The 20 percent rule, according to which intelligence services are allowed to divert one fifth of the line capacity, would not actually be practiced, Landefeld said. The providers lay out their lines in such a way that they are usually only used to 30 or 40 percent. With the 20 percent rule, you end up with 50 to 60 percent of the through traffic, which is not in accordance with the law.

The Federal Chancellery is said to have intervened several times and prevented both the G 10 Commission and the Federal Network Agency from investigating the wiretapping.

Lawsuit against the federal government and constitutional complaint

The operating company of the Internet node DE-CIX sued the Federal Administrative Court in Leipzig against the monitoring measures of the BND, since it considered the legality of the measures to be inadmissible. In an expert report prepared for DE-CIX Management GmbH, the ex-President of the Federal Constitutional Court and professor emeritus for public law, Hans-Jürgen Papier , came to the conclusion that the BND's mass surveillance at Internet nodes was illegal. According to the paper, the BND can neither legally nor actually comply with laws and "disregards and exceeds" the principles of the Basic Law . DE-CIX Management GmbH then filed a lawsuit against the Federal Republic of Germany because, among other things, the amendment to the BND law had exacerbated the problem. The complaint is also based on the above-mentioned report and the results of the NSA committee of inquiry and is against the claims by the BND in the context of strategic telecommunications surveillance .

The Ministry of the Interior (BMI) had at the request of the BND a limitation of the telecommunications secrecy based on § 5 Article 10 Act arranged (G 10). The BND sent the DE-CIX Management GmbH excerpts of this order in a letter dated August 26, 2016, named it as the obligated telecommunications provider that it would use packet-switched transmission paths and asked for further action. With its action, on which the first instance competent Federal Administrative Court has to decide, DE-CIX Management GmbH asserts that data is collected from a purely domestic network node and that purely domestic telecommunications traffic is also evaluated, although Section 5 G 10 is only used to monitor international ones , d. H. authorize cross-border telecommunications relationships. In addition, the BND collects the data traffic of a certain port completely without the statutory quantitative limitation of 20 percent. Finally, the legal authorization of § 5 G 10 is unconstitutional; In addition, the disadvantage of foreigners violates EU law prohibitions on discrimination .

On May 30, 2018, the case was heard before the Federal Administrative Court; In the first and last instance, on the action brought by DE-CIX Management GmbH, it decided that the Federal Ministry of the Interior can oblige it to cooperate in the implementation of strategic telecommunications monitoring measures by the BND. However, DE-CIX Management GmbH does not accept the judgment of the Federal Administrative Court on the legality of BND espionage. It sees the questions raised as not being clarified and legal protection at risk. "We are very sure about our trip to Karlsruhe," said Klaus Landefeld, supervisory board member of the management company, opposite heise online . It is important to submit the numerous legal questions unresolved by the Federal Administrative Court to the Federal Constitutional Court . According to the DE-CIX management, the judgment raises questions about effective legal protection. Citizens without the necessary detailed knowledge could not demonstrate that they were affected by the BND surveillance in Frankfurt. The obligated companies in turn are not allowed to assert the rights of the citizens.

On May 19, 2020, the Federal Constitutional Court announced its ruling in the BND's Strategic Abroad-Abroad Telecommunications Enlightenment case and decided that the surveillance of telecommunications by foreigners abroad by the Federal Intelligence Service is bound by the fundamental rights of the Basic Law and according to the current form the basis of authorization violates the fundamental right of telecommunications secrecy (Article 10 (1) GG) and the freedom of the press (Article 5 (1) sentence 2 GG). This applies to both the collection and processing of the data and the transmission of the data obtained in this way to other bodies as well as the cooperation with other foreign intelligence services.

Map with all coordinates: OSM | WikiMap
Internet node in Germany