This article deals with the technical term organization; for the band with this name, see Organization for the Realization of Common Music Concepts .

Organization ( Greek ὄργανον órganon , German “ tool ” ) is a homonym that can generally be translated as “accomplishment”. However, there are no clear definitions. Etymologically , according to Duden, "organization" is derived from the verb "organize" ("systematically organize, design, set up, build up"), which goes back to the French organe for "tool", "provided with organs", "to assemble into a viable whole".

Organization therefore also stands for the process of organizing through which “continuous independent actions are combined into reasonable consequences”, “so that reasonable results are achieved” or are combined in such a way that they lead to desired goals or results.

In addition, an organization can be a social or socio-technical system that arises from the planned and goal-oriented work of people, is different from the environment and - as a corporate actor ( Coleman ) - can interact with other actors .

In everyday language - but also in some of the strands of organizational research - the words "organization" and "organize" are used to describe a purpose-oriented, systematic regulation of processes. After this broad understanding of organization, however, one must then realize that it is organized almost always and everywhere. After all, not only organizations “organize” their decision-making processes, but families too, their coexistence, protest movements their demonstrations and groups of friends their parties.

Second, organizations give themselves purposes with which they direct decisions. Even if the purposeful assumption, still represented in the tradition of Max Weber, that organizations can be understood in terms of their purposes, could not prevail, purposes for structuring organizations play an important role. Like blinkers, they focus the organization's perspective on a few aspects that appear important and ignore everything else.

Thirdly, organizations are characterized by hierarchies that determine the superordinate and subordinate relationships of the members. Although the micro-politically oriented organizational sociology has convincingly worked out that members who are hierarchically lower down can have considerable sources of power, but hierarchical instructions on membership conditions can be followed and unpopular decisions can be enforced.

An essential characteristic of organizations is that they can decide for themselves how these three characteristics should be designed.

Both in general linguistic usage and in science (e.g. sociology , political science , business administration , computer science ) the term is used ambiguously and under changing aspects. Organization refers to a “structure” on the one hand, and a “process” on the other, to which purpose-oriented structures and actions are assigned.

Instrumental and functional point of view

The instrumental approach sees organization as the totality of all regulations that relate to the distribution of tasks and competencies as well as the handling of work processes. It is mainly used in business administration .

The procedural view regards organization as the act of organizing , i. H. the distribution of tasks to members of the organization ( division of labor ) and their alignment to overarching goals ( coordination ). Karl E. Weick understands his organizational image as an organizational psychological consideration in which the organization describes a group of people who try to make sense of the processes that happen around them.

Since every science usually has a specialized view of the different meanings of organization, it is correspondingly difficult to compare the term with that of the institution . In part, one can find analogous meanings of institution, on the one hand as a set of rules (e.g. the institution of marriage) or as an organized structure (e.g. a court of law).

In contrast to everyday language, the term organization is clearly differentiated from the term institution in the social sciences : an organization is a consciously created, goal-oriented structure that has a founder and a date of foundation. Every organization has members. Institution, on the other hand, is a "set of rules" of behavioral patterns and norms that emerged from the social coexistence of people, i.e. from regularities of their behavior, as it were "naturally" (e.g. the institution of competition, hospitality, marriage, the funeral).

The general rule for institutions is that they are conceivable without members. For example, the university can be described on the one hand as an organization and on the other hand as an institution: As an organization, it is a social structure made up of teachers and learners as well as researchers, administrators and other employees who work together in a systematic, division of labor; As an institution, it is a social institution that serves to convey, pass on and generate practical and orientational knowledge.

Deviating from the social-scientific distinction between the two terms, the New Institutional Economics also subsumes organizations under its institutional term. 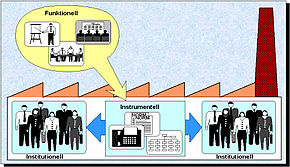 In business administration , the three terms are recorded as follows:

For decades, the instrumental perspective was the predominant understanding of the concept of organization. With the aim of structuring and coordinating people, material resources and information based on specialization in order to achieve the company's goals .

In this context, elements such as formal and informal organization also come into play.

Organizations are social systems that are relatively stable over time and consist of individuals who pursue common goals.

Organizations are often classified according to general target systems as follows:

Organization in the field of organizational behavior

The interdisciplinary subject area Organizational Behavior deals with the analysis of human behavior in organizations and with the possibilities of targeted influence. To do this, u. a. social rules , processes , functions , structures , as well as various other contexts (e.g. expectations, behavior or meaning) are considered in terms of their behavior-controlling effects.

Marketable organizations therefore essentially consist of the communication of and about decisions, whereby each individual decision is linked to previous decisions and is itself a prerequisite for subsequent decisions. In view of the effective reciprocal references of the decisions to other decisions in the interfaces along the value-added processes based on the division of labor, a recursive decision-making network results, the self-reflection of which is based on internal decision-oriented communication processes.

A separate political organization theory has  not yet been implemented , despite research into parties , for example . But with the 21st century, the growing importance of NGOs (non-governmental organizations) opens up new fields of research. They range - for example - from the Red Cross to al-Qaeda .