Under corporate objectives are understood in business administration objectives that the business are operating basis and promoting operational purpose to serve in the future; they represent the target state aimed at by the company .

Company goals can be described by target content, target scope, time reference and target carrier. The target content includes value targets ( sales , profitability , annual surplus or costs ), material targets (activities that serve to achieve the value targets) and human targets ( social relationships with employees , suppliers or customers ). The target extent describes the degree of target achievement and determines when a target is considered to be achieved. When it comes to time, there are period targets (profit target budget for the following financial year ) or time targets (completion of a project at a certain point in time). Target bearers are the groups of staff affected by corporate goals ; Individual goals relate to an individual worker (e.g. their management development ), collective goals, for example, affect an entire department (e.g. their cost reduction goals ).

In addition to the generally prevailing profit maximization, there is also the goal of the cost recovery principle (for example in the case of municipal waterworks or waste management ) or the subsidy principle (e.g. municipal museums or theaters ). There are key performance indicators (KPI) that determine the target level. For example, the EBIT margin has developed into a supplementary profitability KPI, and the cash flow has become a financing KPI.

A corporate goal is a future, generally changed, desirable or desired state that differs from a goal - in the broader sense - in that it is the result of economic decisions . The principles on which these decisions are based can be different, for example the public economy (according to Schmalenbach) or the commercial economy (according to Gutenberg).

In order to be able to align their activities with corporate goals, companies need a defined internal order. The constitutive framework for this is specified by a corporate constitution . Such is usually not available in writing and nevertheless serves as a kind of "basic law" for the company; it is then expressed in the corporate culture .

Against the background of a privately owned company operating according to the commercial principle for the purpose of making profit, the pursuit of profit or profitability is not to be seen as the only, but the most important objective according to the more recent theory of the company. Objectives of non-profit organizations or public companies and administrations require a separate investigation, e.g. B. when it comes to the weighting of the profit target.

The complexity of the subject does not allow general statements to be made about the importance of certain goals in individual companies. It should be noted that there is a wide range of goals in corporate practice, depending on e.g. B. on the respective legal form (under private or public law) or the size of the company ( family company or large company ) (see → Typification of companies )

In general, it can be said that the larger the company and the larger the number of actors and interest groups, the greater the quantity and quality of the organization's goals. One then often speaks of target pluralism. There arise target systems and target hierarchies .

Increasingly complex systems require more differentiated investigation; many more factors have to be taken into account. Here, “simple” company goals can develop into “higher” goals. The strategic management extends the area of ​​investigation to include terms such as the so-called operational purpose , the vision or mission , the corporate philosophy or the corporate mission statement and areas such as corporate policy , corporate constitution and corporate culture.

In small companies of low complexity (few actors / stakeholders) and correspondingly few interactions with society (small company environment), an investigation and scientific consideration of target systems, in the sense of classical business administration, does not usually take place.

A goal is one of the basic operational decisions of a company and is usually determined by the company's management.

It was only with the advent of the decision- making approach (Edmund Heinen, 1968) and the systems- theoretical approach (Hans Ulrich, 1972) that it was possible to make targeting in companies possible in German-speaking business administration.

Several interest groups have an influence on the objective, namely investors , market partners ( customers , suppliers), employees , public authorities and social groups. How these - often conflicting - interests are to be optimally taken into account is a main topic of business analysis . Since around two thirds of all companies are sole proprietorships , individual driving forces must not be neglected. Corporate goals of smaller companies, in which the owner also holds the boss position, are thus largely shaped by the private interests of the owner.

Smaller companies are more difficult to capture systemically because many of the models cannot be applied to them. Fewer influencing groups have an impact on them and their individual decisions have less influence. Social science or psychological approaches can be methodological individualism or neo-behaviorism .

Goals have a variety of functions in companies. Corporate philosophy and purpose, for example, define the company's self-image and thus offer employees the opportunity to identify with the company's mission statement and other interest groups an indication of “where the journey is going” - orientation, identification and motivation functions.

If goals are broken down to lower levels, i.e. made more concrete, then they are action goals or instructions - steering, control, evaluation or communication functions.

The operational planning is done, the level of short-term corporate planning in the implementation and monitoring of strategic planning. This requires a breakdown of the strategic plans into the (partial) periods of short-term planning and an assignment to the functional areas of the operational organization. The key figure system corresponds to the information needs of the corporate functional areas. Each department head will work with his department to work out specific key figures.

The underlying theory of the company assumes that the actors in the company act rationally , e.g. B. in the manner of a homo oeconomicus (theoretical model of a utility maximizer). Such model assumptions make it possible to depict elementary economic relationships, but are rather unsuitable for a detailed analysis. In the New Institutional Economics , for example, factors such as asymmetrical information , limited rationality and opportunism are taken into account in order to arrive at more realistic assumptions.

The trash can model of the organization (James March, 1972) also suggests that there can be no clear information, goals or measurement criteria, but rather incorrect / missing information and logically incompatible goals in a complex, non-transparent environment.

A company usually has several corporate goals. The relevant literature provides for a classification according to 3 target dimensions ; Content, extent and time reference.

It is advisable to operationalize goals with regard to these dimensions (content, extent and time reference) and thus to make them measurable, e. B. according to the SMART method (specific, measurable, demanding, realistic, terminable).

Economic goals, formal or value goals are designations for those goals that reflect the success of entrepreneurial activity. That can be B. be business indicators ; therefore they are particularly easy to measure. In addition, there are the pre-economic goals, i.e. goals that must be met in order to be able to achieve the aforementioned goals at all, for example goals such as "win new customers", "win back lost customers" etc.

At the forefront of these goals are profit and liquidity , as these are generally seen as imperative for the existence of commercial enterprises. You can continue to orientate yourself on many different success parameters: productivity , profitability , return on sales and return on investment . Further formal goals are market power , secure jobs , a good working atmosphere , a positive image and preservation of the environment .

Tangible goals or performance targets are those targets that focus on the concrete actions of operation or a public body relating to the provision of services, ie on the type, quantity, quality, location and time to be producing goods or services to be provided services .

Social goals, human goals, ecological goals describe the desired behavior towards internal and external interest groups (employees, suppliers, customers, the state, the public). Since this content dimension is not directly necessary for the economic survival of a company or does not generate immediate success, it is often viewed as secondary. However, some components are also specified by laws, such as the regulation of working hours or compliance with environmental protection requirements.

Business ethics is also partly concerned with this .

Some authors limit themselves to a division into factual and formal goals.

The focus here is on the period for which the goal should apply or a point in time by which a goal should be achieved. The classic division is made into short, medium and long-term goals; which are also known as operational, tactical and strategic goals. Short-term often refers to a period of one financial year or less; in the medium term, more likely to be two or three years. Long-term planning takes place from 3 or 5 years.

The target extent describes the extent to which a certain goal is to be achieved. It therefore makes a significant contribution to quantification, which is expressed in the degree of target achievement .

The following should be mentioned as dimensions: extremization , satisfication and fixation. 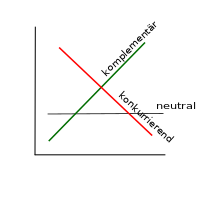 Complementary means complementary ; This is the ideal relationship in which goals can be related to each other, because by reaching or pursuing one goal, the other is automatically achieved or favored - you kill two birds with one stone, so to speak (see also synergy effect ). Example: reduce scrap, reduce costs

Goals that are in competition with one another cannot be pursued at the same time. If you get closer to one, you automatically move away from the other.

In today's highly networked, globalized world, there are hardly any corporate goals that can be pursued completely independently of one another. This means that the neutral target relationship is practically non-existent in reality. A possible example would be the quality of working conditions and the speed of capital turnover .

Goals that completely exclude the fulfillment of one or more other goals. A z. B. A higher level of awareness of a company as a goal is clearly excluded when the advertising budget of the same company is saved. 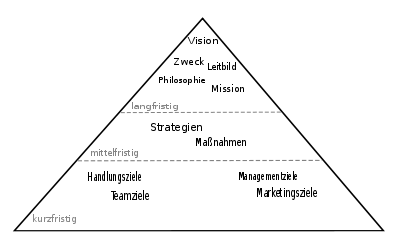 Target pyramid, sorted in ascending order according to maturity and abstractness.

The systemic complexity increases significantly, particularly in large companies (e.g. global corporations ). This usually leads to non-negligible conflicting goals, so that certain goals cannot be pursued at all or cannot be pursued to the optimum extent. In these cases it can be necessary and useful to establish a target hierarchy .

For illustration purposes, representations in pyramid form are usually chosen.

On the one hand, goals can be sorted according to their importance in a goal pyramid (goal A is more important than goal B).

On the other hand, goal-means hierarchies can also be set up. For example: gain (overall objective), cost reduction (Point), revenue maximization (Point), productivity increase (Target), efficiency increase (Target). In this type of hierarchy, not only the priority of the individual goals is mapped, but overarching goals are further concretized through intermediate goals and sub-goals and thus initial instructions for action are given.