The title of this article is ambiguous. Further meanings are listed under Profit (disambiguation) .

In economics, profit or result is the excess of income over expenses of a company . A negative gain is called a loss .

The concept of profit is not clearly defined in business administration , but depends on the respective purpose of the definition. This is problematic because business objectives such as profit maximization or the intention to make a profit require a precise definition. With the maintenance of nominal capital, profit is always present when the equity has increased; then the building trade and tax law to. The maintenance of real capital, on the other hand, requires that the equity has risen by more than the inflation rate . The absolute preservation of substance only speaks of profit if the enterprise value determined as the present value of the future cash flows has increased.

In accounting, the definition of profit is largely undisputed. The profit-making intention of the merchants is realized through the profit made. In order to determine the profit, the law requires that the merchant has to compare the expenses and income in a profit and loss account at the end of the financial year ( balance sheet date ) ( Section 242 (2 ) HGB ). The profit gave the profit and loss account its name. Mathematically, this comparison results in a profit, provided that the expenses are lower than the income:

Otherwise there will be a loss:

Conceptually, the use of profit is to be distinguished from profit as such, which is expressed in the corresponding language understanding.

The philosopher Christian von Wolff defined profit in the year of his death in 1754 as follows: "Profit ( Latin lucrum ) is called the thing that is added to our goods without reducing them or making us richer".

A special understanding of the term has developed for corporations . The German stock corporation law (AktG), which was subjected to a fundamental change in July 1884, provides that the shareholders have to decide how to use the profit. In contrast to the term profit, the annual surplus is defined. It says: “In the resolution on the appropriation of the balance sheet profit, the general meeting can transfer additional amounts to revenue reserves or carry them forward as profit. It can also… resolve the distribution among the shareholders ”.

In business administration one was not content with a mere increase in goods. In 1921, Eugen Schmalenbach saw profit as given after the purchasing power of equity had been preserved (real capital preservation). For him is accounted for to determine the profit gained. In 1926 Karl Hax dealt with the status of the discussion of the concept of profit in his dissertation , which received great attention in science. In 1929, Fritz Schmidt saw profit as the difference between the selling price of a product and its replacement price on the day of sale. In doing so, he favored a profit concept based on the size of the stream . “The ability to distribute the profit is one of the most important features of real profit”. Even Erich Gutenberg represented the real capital maintenance: "Only if it is established that the group represented by the initial capital of the period purchasing power of capital is preserved, a cash surplus can be considered as profit."

Profit is also referred to as profit , often in a derogatory sense. For Karl Marx , the concept of profit was a central concept in his theories. According to this, profit is the appropriation of part of the total social value that has been converted into money by companies . However, this understanding of the term comes from a time when the appropriation of profits was not yet legally regulated in many countries. Marx died in 1883, and in 1884 the 2nd amendment to stock corporation law came into force, which is considered the year of birth of the modern German stock corporation - especially with regard to the distribution of profits .

In the ideological parlance of the German Democratic Republic , profit referred to the surplus of revenues in socialist companies, whereas in capitalist companies this was also referred to as profit and was associated with the connotation “exploitative, greedy for money”. Activities with which one can “generate profit” (= “earn” ) are referred to as “lucrative” . This is due to the Latin word Lucrum (profit, advantage).

German stock corporation law differentiates, for example, between the terms profit and annual surplus . The annual surplus is often referred to as profit after deduction of taxes.

The profit is the part of the added value that accrues to the owners ( partners / shareholders ) of the company as income or asset growth.

Determination of profits in business administration

As a general generic term for all different (concrete) profit terms, the term success is preferred in business administration.

The informative value of profit as an economic key figure is initially low as long as no reference is made to other variables, e.g. B. the amount of capital that was used to achieve the profit. The informative value is also diminished by the fact that the reported profit (formally referred to as annual surplus in accordance with Section 275 (2) No. 20 HGB) mostly does not reflect the result of actual business activity, because legal provisions and accounting policy make this difficult or prevent it (see reserves , Lowest value principle , hidden reserves ).

In cost and performance accounting (KLR), profit denotes the difference between revenue or services and costs :

The KLR is primarily used to provide internal information for the short-term (operational) planning of costs and revenues as well as their control based on plan, target and actual data (see also controlling ).

Systems of the income statement

The various systems of the period income statement are of particular importance, as companies have to report the results of their economic activity to third parties (state, capital providers and other stakeholders ) on a period-by-period basis (external accounting) or for certain internal purposes of corporate management that go beyond the day-to-day business of controlling want to make the profitability of the company's variously interwoven activities transparent in one period.

Periodization is relatively unproblematic where a large number of individual activities contribute to the success of the period and the time span of an individual business process is short in relation to the length of the reference period (short-cycle variety and series production ). However, where long-term, project-based service provision predominates - e.g. in plant engineering - it is often difficult to allocate income and expenses to individual periods.

Since the determination of profits in external accounting to protect creditors, to inform shareholders, to determine a distributable annual surplus and to determine tax assessment bases cannot be left at the discretion of the company, there are correspondingly detailed determination regulations, which are in German law, in particular in the Commercial Code as well as in the tax laws .

According to Section 20 (4) EStG, profit on capital assets is the difference between the income from the sale after deducting the expenses that are directly related to the sale and the acquisition costs .

Determination of profit (other)

Determination of profits according to international accounting standards

In international accounting there is no legal stipulation, rather international accounting standards - shaped by Anglo-Saxon traditions - are set by private associations (so-called "standard setters"). These standards only become binding through the requirement, for example, of the stock exchange supervisory authority and other institutions that the compliance of the annual financial statements to be submitted with the applicable standards must be certified by an auditing company.

Since large companies in particular are increasingly determining their annual net income according to international standards, namely according to the US accounting standards ( US GAAP ) or the International Financial Reporting Standards ( IFRS ), the corresponding Anglo-Saxon profit terms are also being used more and more frequently. This is in particular the so-called EBIT ( earnings before interest and taxes , capital gain) and EBITDA ( earnings before interest, taxes, depreciation, and amortization , gross cash flow). The profits determined according to Anglo-Saxon standards deviate from the profits under commercial law, as these regulations arise from different traditions and circumstances.

Internal accounting is used for internal control purposes and can in principle be freely designed by the company, although in fact certain standards have also developed here. To avoid misunderstandings, internal accounting does not speak of profit, but of the operating result. The operating result is determined as the difference between services and costs. Costs and services differ in the determination and thus possibly also in the amount from the corresponding expenses and income of the same company. If the expenses are not also costs, we speak of neutral expenses. Deviations in costs from expenses are referred to as imputed costs.

The approach of shareholder value aims to achieve a capital market-oriented management of the company through a strategy of the company based on suitable performance indicators. The shareholder value approach therefore combines approaches from capital market theory, strategic planning and accounting. Since the profit of external accounting (of all systems) is distorted by external rules, it is regarded as inadequately suitable for control purposes. This also applies to the profitability indicators based on the profit for the period.

The concept of Discounted Cash Flow (DCF) therefore turns away from the income statement for the period and is based on excess payments (cash flows) and the dynamic investment calculation method. This makes it possible to quantify strategy alternatives with regard to their potential for increasing value for the owners (shareholders).

However, the DCF model is not suitable for a subsequent assessment of the company value created in a period and for the foundation of corresponding incentive systems. The consulting company “Stern und Stewart” has therefore developed an alternative concept that is based on data from external accounting in accordance with international standards, but corrects these with regard to business management issues. The profit corrected in this way is called NOPAT (Net Operating Profit after Tax). According to this concept, however, an increase in value is not associated with a positive NOPAT on its own, only when the costs of the capital employed have been earned does an excess period surplus ( excess profit ) contribute to increasing the company value . This difference between the NOPAT and the cost of capital is referred to as "economic profit" or Economic Value Added (EVA). EVA takes into account many of the corrections that also make the difference between the period profit figures of internal and external accounting; namely the decoupling of non-operational, non-periodic and extraordinary expenses. In addition, investments in intangible assets (training, research and development, market development) are treated as such (and not as expenses for the payment period). However, since EVA takes into account a capital market theory based cost of capital rate, a clear capital market orientation is achieved with this concept that cannot be achieved by the traditional concepts of internal accounting ( imputed interest , risk costs ). 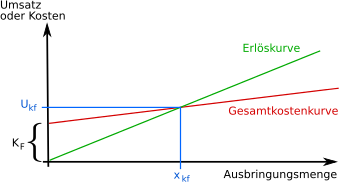 Break-even point from revenue and costs

The profit and loss account does not end - as one might expect - with profit / loss, but with annual surplus / annual deficit. However, the profit / loss is not always identical to the annual surplus / annual deficit. This is particularly the case if the company preparing the balance sheet has to transfer its annual surplus to the parent company as a subsidiary or has annual deficits offset by it. These income or expenses from profit transfer agreements must misleadingly be shown in a position before the annual surplus / net loss ( Section 277 (3) HGB), but in no way lead to the economically correct presentation of profits / losses at the subsidiary. Profit transfer agreements usually ensure that the net profit is "zero". In reality, however, the company had profits / losses that were skimmed off or offset by the parent company. This is done via the “Expenses from transferred profits” and “Income from the assumption of losses”, which are to be shown separately in accordance with Section 277 (3) sentence 2 HGB. They form the adjustment item for the gains / losses actually incurred.