The income tax law of the Federal Republic of Germany regulates the taxation of the income of natural persons .

In terms of tax revenue, the most important form of collection of income tax is wage tax . Other forms of collection are the general procedure ( determination through assessment , collection through notification, if necessary foreclosure ) and capital gains tax (including the interest discount ). In terms of tax liability, a distinction is made between unlimited and limited tax liability. Natural persons ( Section 1 BGB ) who have their place of residence ( Section 8 Tax Code ) or their habitual residence ( Section 9 AO) are subject to unlimited income tax on their world income. The factual tax liability extends to the seven types of income according to Section 2 Paragraph 1 Sentence 1 No. 1 to 7 EStG. The respective income is:

The Income Tax Act also applies to the taxation of legal entities (especially corporations, etc.). However, other tax laws, especially the corporate income tax law , contain special provisions that can supersede the provisions of the income tax law ( specialty principle ). 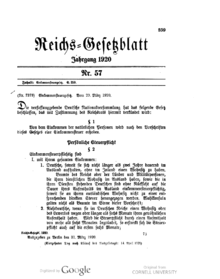 The original version of the Income Tax Act was passed by the German Reich government in 1934 on the basis of Article 1 of the Act to Eliminate the Need of the People and the Reich of March 24, 1933 ( Enabling Act ), under the thereby legalized dictatorial elimination of parliament in questions of legislation , signed and made out by Chancellor Adolf Hitler . The main features of the law are based on the legal regulations that have been in force since 1920.

In the Control Council Act No. 12 of February 11, 1946, a sharp increase in the tax rate was decided. Due to the subsequent currency reform and several tax laws that provided for tariff reductions or tax concessions, this increase in the tariff was partially moderated again.