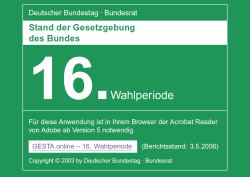 The state of federal legislation ( GESTA ) was an official information system up until the summer break of 2007, which offered comprehensive information on all legislative proposals in the Federal Republic of Germany on a weekly basis. With the introduction of the new database called Documentation and Information System for Parliamentary Processes (DIP), the online information system “Status of Legislation” was completed, which means that no new data has been recorded since then. However, federal laws continue to be issued with a GESTA order number, which can be used within the DIP as a criterion when searching for legislation.

With the aid of GESTA, in particular, all stages of a law or a change in law within the legislative process can be traced, provided that they are before summer 2007. Today the "DIP" database takes on this function.

GESTA lists the legislative initiatives for federal laws that have been introduced in the German Bundestag and the German Bundesrat , sorted by electoral period and subject groups. In addition to the title and a brief summary of the legislative proposal, as well as information on the subject area, according to the reference list (FNA), GESTA provides information about it

The references given are each directly linked to the original documents of the German Bundestag and Bundesrat. This includes, for example, Bundestag printed matter and plenary minutes - each in Portable Document Format (PDF). Also gazettes of the European Union are available as original documents available, as well as - restricted - Federal law leaves from the year 1998, international agreements and contracts from the year of 2002.

In addition to the main part with the individual legislative initiatives, GESTA also contains a statistical overview. This provides information on the total number of bills submitted to the German Bundestag and the German Bundesrat. The inventory is broken down according to various aspects, including a. according to the initiators and the last consultation status.

Outside of parliamentary work, GESTA is of practical importance to the extent that the will of the legislature ( historical interpretation ) is an important point of reference when interpreting legal provisions . Using the original documents listed in GESTA, it is possible to find out this will. In addition to the various draft versions, the documents also contain detailed explanations of the proposed law as a whole and of each individual provision of the draft. Likewise, every suggestion for amendments / changes and every committee recommendation is provided with a reason and published in the respective printed matter. The speeches in the plenary session and the plenary minutes also provide clues about the main reasons when the law was drafted.

The German Bundestag, Department for Subject and Speech Registers, is responsible for processing the content of GESTA.

GESTA has been published as a loose-leaf collection since 1973 and was sold through bookstores until the end of the 14th legislative period in 2002. Starting with the 14th legislative period in 1998, the entries were also available in digitized form as GESTA.online . Since the 16th electoral term, GESTA.online has been continued in a modified form as an integrated part of the documentation and information system for parliamentary processes (DIP / DIP21) of the German Bundestag and is regularly updated.