Income refers to the benefits that a natural or legal person receives in the form of money or a thing over a certain period of time . Colloquially, natural persons are also referred to as earnings, while legal persons refer to profit or surplus.

In economics , income as primary income or, what is equivalent, as national income represents the sum of all domestic added value of social production . In microeconomics, as in macroeconomics, it is one of the variables for assessing economic welfare .

Income is understood to be the net wealth of a natural person or a household in the economic sense within a certain period of time (usually a calendar year or a financial year ).

Income and net worth

Income from work arises from the production or exchange of goods , performance of dependent labor for wages and other claims in a market .

As transfer income is referred to income, which is provided by the state or other institutions without a concrete contribution will be (for example, social assistance , unemployment benefits , etc.).

But income is also generated through inheritance or gifts .

In macroeconomics , income is taken into account for the cumulative measurement of the wealth inflows of an economy . The different economic concepts of income are standardized internationally by the national accounts (VGR), among other things as the European system of national accounts (ESA). This in turn uses the definitions from the United Nations statistical system " System of National Accounts " (SNA). The starting point there is the primary income , which is conceptually identical to the national income (or earlier social product). In its gross form before depreciation as gross national income , it is of great importance for the European Union as an indicator of the income level of the respective member states or their population, and therefore provides (in addition to the sales tax portion) the yardstick for the membership fees that make up the EU's own resources . The term net national income (formerly net national product), which is also used internationally, is gross national income minus depreciation. The term national income used in the German-speaking area is net national income less indirect taxes (statistical technical term here: taxes on goods ) plus subsidies. Mathematically, the amount of national income in a certain country compared to its national income is primarily based on the extent to which the state draws its income from direct taxes or indirect taxes .

The relationship between the various income components can be calculated using the distribution calculation. The two main macroeconomic quantities used to measure income are there

Average gross hourly earnings in some craft trades in Germany from 2003 to 2005.

Since income increases in the presence of inflation do not necessarily mean increases in prosperity , real income is also measured in addition to the (nominal) income derived above .

This is understood to be the price-adjusted nominal income. It is determined by dividing the index (comparative value) of the nominal income by a suitable price index . Real income can only be given as a comparative figure in the form of a change or an index. It serves as an indicator of the actual purchasing power of income. Illustratively, it is about the amount of goods and services that one can buy based on current prices.

With an inflation rate of 4% and an increase in nominal income of 3%, the real income index is 99.04% according to the calculation formula:

The amount of goods and services that one can afford is only 99.04% compared to the previous year.

With an inflation rate of 4% and an increase in nominal income of 3%, real income falls by 0.96% according to the calculation formula:

The amount of goods and services that can be afforded has decreased by around 0.96% compared to the previous year.

Adjustment of income for taxes and duties 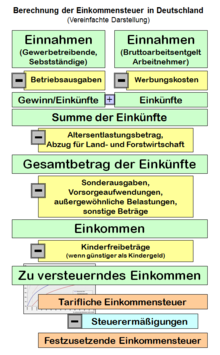 The income distribution examines the distribution of income in different social groups. Income is unevenly distributed in all OECD countries. The term “income gap” is also used to symbolize the difference between low and high incomes in a society .

In addition to the distribution of income, the development of incomes over time for certain groups (e.g. occupational groups, men, women; cf.Gender Pay Gap ) and the income dynamics of individuals (often associated with social advancement or decline) are subjects of research. The latter are often determined with longitudinal studies .

According to the microcensus , 5.5% of the population in Germany live below the poverty line despite having a job . Semi-skilled and unskilled workers and self-employed without employees are particularly affected. See also: Working Poor . The average income of all workers in Germany in 2006 was around EUR 1,503 per person per month.

One-person households with a net income of more than EUR 2,700 per month no longer belong to the middle class, even if those affected often do not see it that way. They can be called "wealthy". From a net income of 3,600 euros, science describes a person as rich.

Manager salaries have risen significantly compared to the wages of average employees in Germany in the last few decades, more than three times more between 1987 and 2006:

According to the OECD, income inequality increased more sharply in Germany in 2008 than in any other OECD country. The disposable income was highest in the group of self-employed with more than ten employees. It was lowest among unskilled workers and farmers . The farmers had even less disposable income than the unskilled; the median income ( median ) was 1,252 euros per month, the average income was more than twice as high at 2,706 euros per month.

In 2010 the average gross income in Germany was € 2,136 per month; Women earned an average of 23% less than men. The difference between the individual economic sectors was also partly clear: On average, a full-time employee in the hospitality industry earned 1,972 euros in the fourth quarter of 2011, and a full-time employee in the information and communications industry earned 4,430 euros, each before deduction of taxes and employee's share of social security contributions .

An OECD study presented at the end of 2011 confirmed this trend: In 2008, the 10% of the population with the highest income earned around eight times the bottom 10%; In addition, the gap between the top income and the bottom 10% of full-time workers increased by 20% between 1995 and 2010.

In France, the mean net annual income of employed persons was 20,670 euros.

In Austria in 2010 the employed (excluding apprentices) had an average net annual income of 18,366 euros.

American President Theodore Roosevelt gave a speech to 30,000 people in Osawatomie , Kansas state , in August 1910 that went down in the history books. He denounced the huge income inequality and spoke of the need for a regulated economy and a strong government. "Human welfare" is more important than the profit of the individual. He called his program to strengthen the middle class "New Nationalism".

American society “lacks the center. The rich and poor in the country have diverged rapidly, so rapidly that the top percent of citizens draw almost a quarter of all incomes - twice as much as 25 years ago. In the end, America grew almost exclusively for its rich, the middle and lower classes even lost purchasing power on average. And jobs too. "

President Barack Obama gave a keynote speech in December 2011 - also in Osawatomie - in which he also denounced economic inequality. Growing inequality belies the promise of the American dream that anyone could do it if they just wanted to. This is not about any political debate, but about "the crucial question of our time".