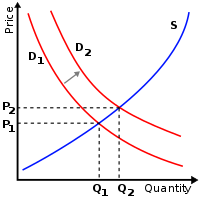 Its subject is the economic behavior of individual economic subjects ( households and companies ). She analyzes decision-making problems and coordination processes that are necessary due to the division of labor in the production process, and the allocation of scarce resources and goods through the market mechanism . In particular, microeconomics studies markets in which goods and services are bought and sold. In addition to the actors in these markets, the market structures ( monopoly , oligopoly , polypol ) and the respective institutional framework are also taken into account. A central concept is the market equilibrium , which is established through pricing . 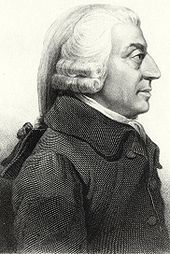 Mostly Adam Smith is mentioned as the founder of microeconomics (or classical economics ). In his work The Prosperity of Nations (1776) he examines u. a. Advantages and disadvantages of the market mechanism. Above all, he discovered how economic benefits can arise from individual self-interest.

At the end of the 19th century , with the marginalist revolution, the mathematization of economic analysis began, as a result of which economics concentrated on quantifiable phenomena (quantities and prices) and narrowed it down to " economics ", which studied the behavior of suppliers and buyers in markets.

Since the 1950s, economics has continuously expanded its field of application. By Gary S. Becker many new areas of economic analysis were subjected, as in politics, law, family, organization, or history.

First, the classic areas of microeconomics should be considered.

The household theory deals with the demand side of the commodity market . An important object of investigation here is the benefit that a customer has from the shopping cart , the amount of all goods that he buys in a certain period. For this, preference relations and convexity assumptions play an important role. For the consideration of preference relations, the transitivity assumption and the completeness assumption of preferences are particularly important. The assumptions about a rational actor can be used to describe indifference curves .

In contrast, there is production theory , which deals with the supply side of the goods market. Based on a given production function , which indicates the ratio of input to output factors, it is examined which production quantities should be produced with which input factors.

The price theory examines the pricing as a result of the encounter between supply and demand in markets under different forms of competition and the conditions for achieving stability and a balanced market .

Neoclassical microeconomics is particularly important in teaching at universities . Like the other areas of microeconomics, this works with mathematical models .

In addition to these three basic parts (household theory, production theory and price theory), other approaches have emerged:

In microeconomics, as in general economics, abstract models are often used. This has the advantage that, in this way, concrete questions can be made manageable for mental penetration. There are only a few fundamental assumptions that apply everywhere in economics.

For example, if the conditions according to Jevons' law apply (e.g. there are no spatial or temporal distances), one speaks of perfect markets . These are a theoretical model with very special restrictive assumptions. In a perfect market, for example, there is no arbitrage , so supply and demand meet at a common point, the market equilibrium . Restrictive assumptions such as the perfect market, complete information or the rationality of Homo oeconomicus can be abandoned, but require correspondingly more complex modeling.

When it comes to the question of how markets work, one first has to look at how an individual market works. If the interaction of many or all markets is to be considered at the same time ( interdependence ), one speaks of the theory of general equilibrium ( general equilibrium model ).

In particular, the prevailing neoclassical economic theory has some standard assumptions:

As early as the 19th century, Gustav von Schmoller pointed out that the knowledge of psychology should be given greater consideration in economics. Representatives of behavioral economics , for example, assume a different image of man . A limited rationality among the actors is also assumed here. The 2002 Nobel Prize winners Daniel Kahneman and Vernon L. Smith have recently earned recognition in behavioral research. Another essential component of behavioral economics is the prospect theory (new expectation theory), which is a psychologically more realistic alternative to the expected utility theory.

There are two classic methods of economic and social science research:

In the total analysis , the simultaneous interaction of all economic subjects involved in the economic process is considered (cf. general equilibrium model ).

In both partial and total analysis, the role of prices and the price system is at the center of considerations (price theory).