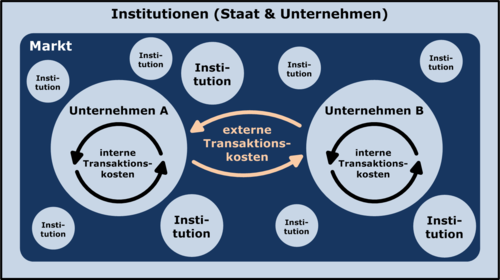 Transactions are the basic units of analysis in transaction cost theory. This refers to all transfers of rights of disposal to goods and services in exchange relationships between at least two contractual partners.

Transactions are efficient when the actors choose a form of organization that has the lowest total production and transaction costs.

Based on these three behavioral assumptions, companies should design their processes of clarification and performance agreements in such a way that the problems that arise from the uncertainty of future market conditions, limited rationality and possible opportunistic behavior of business partners are minimized.

An exchange of goods or services that shows little uncertainty and is not associated with transaction-specific investments (factor-specificity) will be processed via the institutional arrangement market . Due to the large number of existing competitors , opportunistic action by the contractual partner is restricted. In addition, a subsequent contract adjustment is associated with low costs and can also be enforced autonomously by a contractual partner, for example by looking for a new provider.

Thus, a hybrid organizational form is the most suitable form in which the contractual partners protect themselves from opportunistic behavior by agreeing information obligations or sanctions in the event of non-fulfillment of the contract and anticipate possible renegotiation or adjustment costs .

An organization-internal provision of services is the most cost-effective institutional arrangement in the case of very great uncertainty and large transaction-specific investments (factor-specificity). Transaction costs such as obtaining information, negotiation and contract costs can be saved in advance ; and later adjustments are also much easier to process internally. With a separate management and control system in the organization, opportunistic behavior can possibly be completely eliminated.

The aim is to choose the type of organization in which the transaction costs of coordination (information and communication) are minimal and the greatest possible efficiency of the exchange and the protection of investments are guaranteed.

The success of the transaction depends largely on the actors' propensity for opportunism . The smaller the number of actors, the greater the tendency towards opportunism (small numbers problem).

Market vs. Hierarchy depends on the specificity

The graphic market vs. Hierarchy depending on the specificity shows the connections between the possible institutional arrangements and the factor specificity. Here, internal provision of services, i.e. the form of the relational contractual relationship, is called a hierarchy and the hybrid organizational form is called a network . According to this, transactions with high specificity are better processed in the hierarchical form, while those with low specificity are processed via the market .

The classification of the corporate networks (independent organizational form between market and hierarchy or an intermediate form) is still questionable.

The problem of determining the transaction costs has not yet been solved. At the same time, the theory helps to formulate some basic findings on the advantages of the following decisions:

Both opportunities and dangers of cooperation arise in the scope. A fair amount of leeway is an essential condition of cooperation.

→ Trust is not an issue in the TKA! Opportunism is the assumption of behavior.

Similarities in preferences , values, goals and competencies minimize coordination costs. This facilitates mutual coordination and learning. The efficiency aspects dominate. In the case of longer-term relationships, however, very uniform cultures can lead to higher transaction-specific investments that increase dependencies and allow the weaker to be exploited and to behave opportunistically. This creates coordination costs that undermine the efficiency benefits.

Reputation can be interpreted as specific capital that needs to be defended the more opportunities there are for opportunism . Good reputation reduces the incentive to behave opportunistically. This reduces information and negotiation costs as well as search costs.

The starting point of the transaction cost theory is the work The Nature of the Firm by Ronald Coase , published in 1937 , who received the Alfred Nobel Memorial Prize for Economics in 1991 . In this essay, Coase asks why there are companies that have no place in the theory of perfect markets that had prevailed until then. Coase concluded that the Invisible Hand postulated by Adam Smith , which regulates market events, may be invisible, but not free of charge. He does not yet use the term transaction costs, but speaks (literally translated) of costs for using the price mechanism (i.e. the market). Williamson later linked this conception by Coase with the concept of transaction costs by Arrow (1969).

Another important theoretical work was presented by Kenneth Arrow , who dealt with transactions and transaction costs. At the beginning of the 1970s, institutional economics was interpreted as a transaction cost approach. Finally, in 1985 Oliver Williamson published The Economic Institutions of Capitalism: Firms, Markets, Relational Contracting, a treatise that constituted a comprehensive and detailed description of the theory of transaction costs.

The transaction cost approach has also been applied to political science , whereby the goods exchanged are not so clearly definable. When politicians exchange votes for election promises, transaction costs such as information costs arise .