Profit maximization with a monopolist

A characteristic of this situation is that there is a price-sales function that describes the quantity of a product that can be sold at a certain price. One can generally assume that a larger amount of the product can be sold if prices fall.

The company then chooses the price for its product at which the maximum profit can be achieved. The price is therefore not given, as in a market with perfect competition , in which the companies act as price takers or volume adjusters , but is chosen by the monopolist.

The point on the price-sales function at which a monopoly company achieves maximum profit is called the Cournot's point .

Formulas for maximizing profit for a monopoly

A particularly easy-to-use version of a profit function formulates profit as a function of the output quantity of a certain good, i.e. the following applies to the profit function :

with the revenue and cost function (each depending on the quantity sold ).

It is assumed that the profit function is twice continuously differentiable . According to the general rules about the maximization of functions, there is a (local) profit maximum at an inner point if, on the one hand, the marginal profit for this set is zero, that is

(1) (necessary condition for a maximum),

(2) (sufficient condition for a maximum). 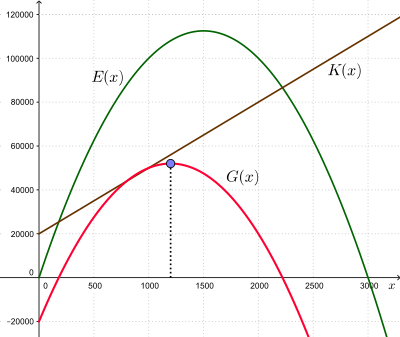 Illustration of the example: The profit maximum is at the point .

Illustration of the example: In the maximum place of the profit function, marginal revenue and marginal costs coincide.

The price-sales function of a monopolist is given

as well as a linear cost function

The revenue function is initially

For the profit function follows

The first order condition for a maximum is , and so

This is because of

also sufficient. The price-sales function shows that the price for this production volume is.

At first glance, this does not seem to make sense, since it is assumed that no entrepreneur enters the market without being able to make a profit. Doesn't he want to be 'paid' for his work in the company (planning, organization, etc.) and for the risk he takes?

Even in a perfectly competitive market, such as B. is dealt with by Arrow & Debreu , the entrepreneur appears, albeit as a normal consumer who on the one hand makes his labor available and on the other hand receives the most preferred bundle of goods intended for him by the market, just like every other market participant.

The entrepreneur thus receives a virtual salary for his work. There is no risk for him in this market, he is only responsible with his labor. He has raised capital for buildings, machines, etc., for which he has to pay interest, which appears quite normally in cost accounting and is taken into account by the market.

One hypothetical question is how does a fully competitive market prevent companies from making a profit? To do this, you have to keep in mind that in a market with full competition there are theoretically many suppliers for the same product ( homogeneous polypol ) and that all relevant information is known to everyone. First of all, it follows that no consumer would accept a price higher than the lowest price.

Would a company z. B. can produce more cheaply due to innovative production, the other suppliers would also switch to this production process, which would restore the same conditions and all manufacturers would have to offer the same price without profit. That is the optimal price that is 'found' by the market and that every entrepreneur gets - no more and no less. However, there is no perfect competition anywhere, it is a theoretical construct.