Bust of Altdorfers in the Munich Hall of Fame

Albrecht Altdorfer , also Albrecht Altdorffer (* around 1480 perhaps in Altdorf near Landshut or in Regensburg ; † February 12, 1538 in Regensburg), was a German painter , engraver and builder of the Renaissance . Along with Wolf Huber, he is an important representative of the so-called Danube School , a style movement along the Danube in Bavaria and Austria. The artists of the art direction are also known as "wild painters from the Danube". Together with Albrecht Dürer , whose student he is considered to be, he is seen as the founder of the Nuremberg Kleinmeister .

Little is known about the artist's life. His father was probably the Regensburg painter Ulrich Altdorfer. Documents ensure that Altdorfer acquired Regensburg citizenship on March 13, 1505 .

In 1517 the respected citizen, who worked for Emperor Maximilian I , among others , was elected a member of the Outer Council of Regensburg. Albrecht Altdorfer was part of the delegation of the councilors who ordered the deportation of Regensburg Jews on February 21, 1519. He later made several woodcuts for the pilgrimage church “Zur Schönen Maria” built in this location , painted the church flag and illuminated the bull of indulgence.

In 1526 the artist became a member of the inner council and city architect of Regensburg . In this role he built a slaughterhouse (1527) and reworked the city's fortifications (1529/30). On September 15, 1528, he rejected the election of mayor in order to be able to accomplish an important work, probably the Battle of Alexander , for Duke Wilhelm IV of Bavaria . In 1533 his signature is found as one of 15 council members under an advertisement for a Protestant preacher . As envoy of the city of Regensburg, Altdorfer traveled to Vienna in 1535 to see Ferdinand I to deliver a letter of apology from the city, which had fallen out of favor because of those political and religious activities. 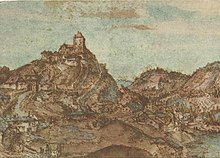 The prince-bishop's market in Wörth 1524, pen drawing in watercolors by Albrecht Altdorfer

The city of Wörth an der Donau honored his work by dedicating the street name "Altdorferstraße". Albrecht Altdorfer created, among other portraits of Wörth, the painting Danube Landscape with Wörth Castle and, as Regensburg's city architect, he played a key role in the renovation of Wörth Castle on the Danube. In Vienna's 10th district there is also an Altdorferstraße on Wienerberg near the Spinnerin am Kreuz . The writer Hans Watzlik honors him with the biographical poem 'Der Meister von Regensburg'. In 1998 the asteroid (8121) Altdorfer was named after him. Furthermore, the linguistic-humanistic as well as scientific-technological Albrecht-Altdorfer-Gymnasium in Regensburg is named after him.

1506 is the earliest date that appears on Altdorfer's drawings and paintings . Two of his paintings are particularly well-known today: the Sebastian altar from 1509 to 1518 from St. Florian Monastery near Linz with its dramatic mannerist scenes and The Battle of Alexander (1528–1529), which was commissioned by Duke Wilhelm IV of Bavaria . On a size of 158 × 120 cm, it shows the fight of Alexander the Great against the Persian king Darius in the battle of Issus in 333 BC.

Some of his 55 panel paintings are in the Kunsthistorisches Museum in Vienna. 124 drawings and drafts (including the triumphal procession of Emperor Maximilian I ) have been preserved. His graphic work comprises around 200 sheets, mostly woodcuts and copperplate engravings , but also some etchings . In addition, a room painting by him in the Bishop's Court in Regensburg is known, but it was destroyed in a fire and subsequent renovations in 1887/88 and is now only preserved in museum fragments.

From May to October 1938 the memorial exhibition Albrecht Altdorfer and his circle , curated by Ernst Buchner , took place in the Munich State Gallery to mark the 400th anniversary of his death . The official catalog lists 56 paintings and approx. 270 drawings, engravings, etchings and woodcuts as well as a dozen frescoes by Altdorfer. As a recently rediscovered sensation of the so-called Old German panel painting , Altdorfer's Schöne Maria was presented at the time , which was exhibited in an altar frame. The latter was specially made according to the specifications of a corresponding Altdorfer print. In this context, the beautiful Maria is currently in the permanent exhibition of the Diözesanmuseum Regensburg .

On the 450th year of his death, Altdorfer's drawings, opaque color paintings and prints were exhibited in Berlin and Regensburg. In February 2011 the University of Regensburg organized an art history symposium entitled Albrecht Altdorfer. Art as second nature . The exhibition Fantastic Worlds. Albrecht Altdorfer and the Expressive in Art around 1500 took place from November 2014 to February 2015 in the Städel Museum in Frankfurt and from March to June in the Kunsthistorisches Museum in Vienna.