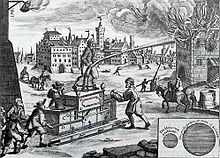 Engraving, 1661: The Nuremberg fire brigade with a fire engine

The engraving (obsolete also Chalcography called) is a graphical gravure printing process . With copper engraving, the image to be printed is “dug” into a copper plate by cutting using a graver . The resulting lines then absorb the color , which is printed on the paper with a roller press. The maker of an engraving is called a copperplate engraver , the printer a copperplate printer .

History of the engraving

Master of the Playing Cards: Christ on the Cross (between 1435 and 1455). One of four surviving sheets of a Passion Series 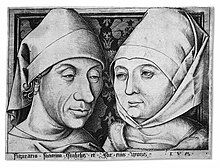 One of Albrecht Dürer's three masterpieces : Knight, Death and the Devil

The French term Gravure reveals the origin of the engraving. Originally, in the arms and silversmith's trade, ornaments were transferred and archived with it, as it was recognized that a mirror-inverted image of the engraving could be obtained by rubbing paint or soot into the depressions and pulling it out of the depressions with moistened paper. In this way the pattern could also be transferred to other objects. The first engravers were almost without exception goldsmiths.

The composition of the picture in the oldest copper engravings shows clear similarities with the niello , a technique used to decorate precious metal objects. The Benedictine monk Theophilus Presbyter described this technique as early as the 12th century in his collection of scripts Diversarum artium schedula . An engraved metal surface was then coated with a layer of black powder and then heated. The melted dye filled the pits and appeared as a sharp mark on the metal after polishing. The manufacturers of such Nielli also archived their work by making prints of the engravings on paper. These prints were also known as nielli and were already collected in the Middle Ages. Inscriptions appear naturally mirror-inverted on such nielli on paper. Around 1450, the production of impressions seems to have established itself as the actual goal of engraving. The inscriptions on the early engravings are now reproduced correctly.

The copper engraving technique was probably first used in Upper Germany around 1420/1430. It is possible that the technology in southern Europe was developed independently at the same time. Since the 14th century, the cheaper paper slowly displaced parchment as a writing material and thus enabled the invention of niello and copper engraving techniques as well as letterpress printing .

Unlike the woodcut , the copperplate engraving developed independently of the book, since its gravure printing process was difficult to combine with the letterpress letterpress at that time . Instead, the first copper engravings were used for pilgrimage devotional items and as patterns for design models for playing cards, decorative letters, etc. used.

As the most important masters of the early days of engraving in the German and Dutch area of the Upper Rhine are masters of playing cards , the dependent by him of the Berlin Passion (Netherlands) and probably in the archbishopric of Salzburg active Master Life of Mary . The Master ES was probably a pupil of the master of playing cards and left a legacy of over 300 sheets. This artist is considered to be of particular importance for the development of copper engraving into an independent art genre. The other important early German engravers can only be identified under emergency names. The masters BM, AG and PM are particularly to be emphasized here. About 90 engravings have survived from the master of the house book (Middle and Upper Rhine).

Giorgio Vasari mistakenly saw the Florentine Maso Finiguerra as the real inventor of the copperplate technique . However, the “fine manner” style probably goes back to his assistant Lorenzo Ghiberti . Andrea Mantegna is considered the main master of Italian copper engraving in the 15th century , who took up the monumental size of ancient models and implemented them in his art.

Most early engravings are copies of other works of art, such as paintings and sculptures. The art-historical significance of copper engraving can therefore also be seen in the fact that with this relatively inexpensive reproduction technique, image ideas and motifs quickly spread throughout Europe. In the course of the 15th century painters increasingly discovered the technique of copperplate engraving as an independent means of expression. The first significant engraver was Martin Schongauer , who had such an outstanding reputation that the young Albrecht Dürer wanted to do his apprenticeship and the young Michelangelo drew copying from his works. As with the woodcut was Dürer, who revolutionized the art of engraving and perfected and masterpieces such as Knight, Death and the Devil and Melencolia I created. In many scientific representations, for example in anatomy , illustrations were made using the technique of copperplate engraving. A well-known illustrator is Gérard de Lairesse .

In the 16th century, enterprising publishers rationalized the art business. The result was a large-scale production method in which draftsmen, engravers and publishers worked closely together and distributed sheets of different genres for various prospective buyers, such as the large-format so-called thesis sheets for the academic circles of Catholic education. Matthäus Merian and Wenzel Hollar are among the best-known engravers of the 17th century . At the beginning of the 18th century, the draftsman Friedrich Bernhard Werner produced views of numerous European cities for an Augsburg art publisher, which were then put into production as copperplate engravings. Only the further development of woodcuts to wood engravings by Thomas Bewick towards the end of the 18th century replaced copper engraving as the primary reproduction technique, since wood engraving was the more economical technique.

In 1711/1712 the technique of copperplate engraving came to China when the Franciscan and missionary Matteo Ripa was commissioned by the Chinese Emperor Kangxi (1662–1722) to depict , among other things, the imperial summer residence Jehol , 250 kilometers north of Beijing . The copperplate engravings of this garden , which Matteo Ripa brought back to London on September 11, 1724 , influenced the redesign of the English landscape garden.

The technique of engraving

Depiction of the engraving technique in the Encyclopédie , around 1760

The surface of a 1 to 3 millimeter thick copper plate is carefully ground and polished before engraving . The reverse drawing is transferred to this prepared surface and cut line by line into the metal with a grave stylus . Engraving is a gravure printing process . Lines appear black on the paper, the intact polished areas of the plate appear white. In contrast to etching , the tool (the burin) is pushed away from the body and the material is cut from the plate. This means that there are no burrs on either side of the line as with drypoint technology . The prints therefore appear “colder”, more technical and not as picturesque as a drypoint etching. As larger areas can not be stood out from the metal plate - such as the woodcut , which a high pressure is - must achieve a surface similar effect numerous, standing close together lines. While the hard contrast between light and dark is a typical feature of the woodcut, the copperplate engraving allows a differentiated and "corporeal" reproduction of what is depicted thanks to the delicacy and hatching overlay of the lines, which allow flowing transitions. This enables a wealth of detail that - compared to the woodcut - allows a greater variety of shapes.

The technology is very labor-intensive. For the famous leaf Knight, Death and the Devil needed Albrecht Dürer more than a quarter.

The heated plate is colored, whereby the printing ink penetrates into the finest lines through the heating , and then cleaned again so that color only remains in the lines. Finally, the printing takes place with a roller press in which the moistened paper picks up the ink from the depressions.

To distinguish between the different techniques of etching and engraving, see Etching . Both techniques were often used in combination.

A technically cleanly manufactured copper plate enables around 200 prints of the best quality. Another 300 to 400 sheets can be produced in good quality. Then only mediocre prints can be obtained, which increasingly flatten. In the present, rolled copper plates are used, which, compared to the older, hammered plates, require even smaller editions.

Distinguishing features of an engraving

In addition to the general distinguishing features of gravure printing , copperplate engraving has the following features: 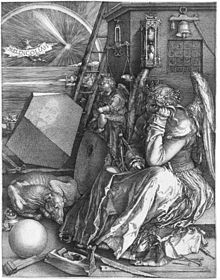 In the Renaissance and early modern times copper engraving was very popular as a means of book illustration. Well-known artists made - often on behalf of princes and rulers - copperplate engravings that served the purpose of today's portrait photography or depicted cities and mansions. Well-known artists of this era are Meister ES , Martin Schongauer , Albrecht Dürer , Lucas van Leyden .

Copper engraving experienced its heyday in the Baroque period with artists such as Peter Paul Rubens and Matthias Merian . Rubens employed a large number of engravers who made copies of his paintings. These were bound into catalogs and distributed throughout Europe to promote his workshop.

However, copper engraving was soon replaced as a means of painting reproduction because the invention of the aquatint and mezzotint made techniques available that made shades of gray and even color prints possible.

Other important engravers can be found in the category: Copper engravers .

Engraving in the language

The phrase “My dear friend and engraver” also comes from this profession . This was shaped by the poet Friedrich Rückert (1788–1866), who used this as a salutation in the letters to his friend Carl Barth , who was a copper engraver by profession. Furthermore, the term abkupfern the production of a cheap copy or a plagiarism .