The scraping technique , also called mezzotint or black art, is a gravure printing process that was developed in Holland in 1642 by the German Ludwig von Siegen . It reached its peak in English portrait painting in the 17th and 18th centuries . The first known portrait using this technique dates from 1642 and shows the Landgravine Amalie Elisabeth von Hessen . 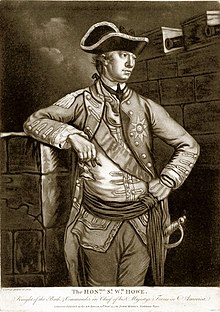 The mezzotint was mainly used for single sheets and seldom for book illustrations.

In the scraping technique, the smoothed is copper plate having a toothed Granierstahl (also cradle iron or mezzotint knife called), or with the grain Roller ( Roulette , an occupied with teeth wheel or a ball () Moulette ) completely roughened by pressing smaller wells until the plate is covered with a dense, completely uniform grid. If a print of the printing plate were made in this state , the result would be an even, velvety black print.

On the prepared surface, the artist smooths the areas where he wants lightness with a scraper or polishing steel . The lighter the print tone, the more polished the plate must be. During the subsequent blackening process, depending on the smoothness and roughness, the copper will absorb less or more ink and transfer it to the paper during printing. This means that all tonal values ​​from very light to very dark can be created for a high-contrast light-shadow effect.

The graphic process, which is very time-consuming, is particularly suitable for reproducing the effect of large paintings. Since the plates are very sensitive, a maximum of less than 100 prints per printing plate in high quality is possible, provided the plate is not stolen.

Due to the high workload associated with this technique, there is little modern work in mezzotint. This is all the more true as an at least similar effect can be achieved with the scraped aquatint . But there are at least two very well-known works in which this technique was used:

Distinguishing features of a mezzotint

In the upper area, the working marks of the chopping knife and the tooth positions are clearly visible, in the wider area the scraped areas. Format 218 × 15 cm. Title: "Sin Cabeza"