Goya is a redirect to this article. Further meanings are listed under Goya (disambiguation) .

Francisco de Goya was the son of the respected gilders José de Goya († 1781) and the impoverished country nobility Gracia Lucientes y Salvador. He was the fourth child after two sisters and a brother; two other brothers followed after him. The eldest, Tomás, later took over the father's workshop. The collaboration of the gilders with painters, sculptors and carpenters in the production of ecclesiastical retables had declined because these baroque works no longer corresponded to contemporary tastes. As a result, Francisco had to learn a different trade, because his father's workshop could not provide him with any additional income.

Goya therefore had lessons from the baroque painter José Luzán in Saragossa from 1760 and later worked mainly in Madrid . In 1773 he married Josefa Bayeu there. Between 1775 and 1776 he designed models for the royal carpet manufacturer Santa Bárbara in Madrid and was later appointed academy professor. In the 1770s he made the acquaintance of Luis de Borbón y Farnesio , brother of the Spanish King Charles III. , whose family members he later portrayed several times. In 1786 he entered the service of Charles III as a court painter. and from 1788 to Charles IV. His "ascent" was by no means smooth, but was caused by constant arguments with the Academia San Fernando , to which he applied several times without success, other court painters, especially with his brother-in-law Francisco Bayeu, and wrestling Orders shaped.

He created religious frescoes , for example for the Basílica del Pilar in Saragossa , and some altarpieces influenced by Giovanni Battista Tiepolo's painting . A little later he was recruited by Anton Raphael Mengs to work as a painter for the royal tapestry workshops founded by Mengs . The designs for the carpets show traditional Spanish scenes and thus begin to soften the Rococo tradition. Numerous portraits were created for the nobility, such as the painting Portrait of the Marquesa de Pontejos from 1786, and for the Spanish royal family. 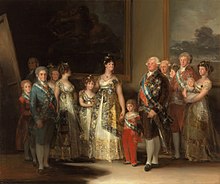 The family of Charles IV. , Originated in 1800, is surprising as particularly ruthless in its realistic depiction . A contemporary critic said that the king (6th from right on the painting) and his wife (8th from right) “looked like like a baker and his wife after winning a lottery. ”In terms of art history, the painting is to be seen in connection with the work Las Meninas by Goya's famous predecessor Diego Velázquez . Like Vélazquez, Goya also portrays himself in the picture behind his easel as a subjective observer of the king's family at court.

In 1792 Goya became seriously ill, resulting in lifelong deafness . For speculation and myth-making, not least in the novel Goya or the evil path of knowledge of Lion Feuchtwanger processed, made his supposed love affair with the Duchess of Alba , which he portrayed several times . However, very few meaningful sources have survived on this subject.

In the 1790s, a turning point in his artistic work can be recorded. Goya's art was no longer aimed solely at the courtly environment and its desire for representation. He slowly retired from his public offices and created prints which he tried to sell on the open market . The Los Caprichos (c. 1796/1797, first published in 1799) and Desastres de la Guerra (1810–1814), made using the aquatint technique , show how astute he was about the political and social circumstances of his time. The Desastres de la Guerra are particularly marked by the consequences and atrocities during the Napoleonic rule and the war of independence of the Spanish people . Goya painted these events as a theme in works such as The shooting of the insurgents on May 3, 1808 (1814). In the same year he had to justify himself to the Inquisition for the famous paintings of the pictures known in German-speaking countries as Maja dressed and naked because of a wrong translation from Spanish . The naked Maja was the first nude painting in Spanish art to show pubic hair. The painting was originally connected to its counterpart The clothed Maja by a hinge - with this device the revealing variant could be covered by the chaste representation. Not only these paintings caused offense, but also the etching series of Capricho and Disastre , in which Goya critically denounced the wrongdoings and vices of the church representatives of the time .

Tauromaquia No. 33: The Death of Pepe Hillo 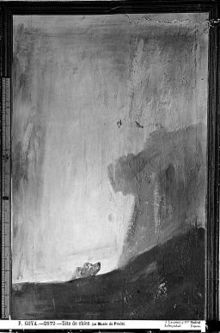 The last of Goya's great etching cycles was Tauromaquia , published in 1816 , a series on the art of bullfighting , which consists of 33 etchings. It continues the style of the disasters with the tumultuous individual fights.

After the Bourbons were back on the Spanish throne, Goya was reinstated as court painter. With the struggle between monarchists and liberals, however, the political unrest was far from over. Goya retired in 1819 to his country house "Quinta del Sordo" ("Country House of the Dove"), the walls of which he painted until 1823. The so-called Pinturas negras (Black Pictures) are an impressive testimony to his late work, in which the painter's gloomy fantasies seem to have been mixed with the depressing circumstances of the time. In the meantime they have been removed, put on canvas and given to the Prado . Examples of these murals are Fantastic Vision and Dog .

Eventually the situation became unsustainable for Goya, who frequented liberal circles. To avoid political persecution, he traveled to France, where he lived in Bordeaux from 1824 . There he worked on his last etchings showing bullfighting scenes. Goya's last painting is the milkmaid of Bordeaux (La lechera de Burdeos) from around 1827, which critics speculate that it could have been painted by Maria del Rosario Weiss (1814–1845).

In 1824 Maria came to France with her mother Leocadia Zorilla; the latter was supposed to run Goya's household. Goya taught Maria painting and drawing, she later worked as a painter herself in France and Spain. This has led to speculation that she may have been an illegitimate daughter of Goya, but several Goya biographers believe this is unlikely based on the life data. Goya died in Bordeaux on April 16, 1828. In 1901 his body was transferred to Spain and in 1919 buried in the Ermita de San Antonio de la Florida in Madrid .

Self-portrait of Goya from his Los Caprichos

The burial of the sardine

The work The Colossus ( El Coloso ) from 1808–1810, exhibited in the Museo del Prado, Madrid, has long been regarded as one of his works. The authorship had long been disputed; The new findings from the Prado Museum lead to the conclusion that The Colossus must be the work of Goya's student Asensio Juliá.

Many subsequent artists, especially painters, have modeled works by Goya, interpreted them pictorially or dealt with the "master" in the form of a homage . Goya's work was also formative for the development of realism in art in the second half of the 19th century.

British artist brothers Jake and Dinos Chapman refer to Goya in many works.

(sorted by year of origin)