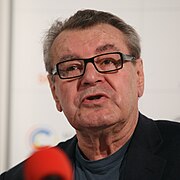 Miloš Forman (real name Jan Tomáš Forman ; born February 18, 1932 in Čáslav , Czechoslovakia ; † April 13, 2018 in Danbury , Connecticut ) was a Czechoslovak - American film director . In the 1960s it first received international attention as part of the Czechoslovak New Wave . After confrontations with the communist regime, Forman had to emigrate to the United States . There he was awarded two Oscars for his work on the films One Flew Over the Cuckoo's Nest and Amadeus .

Miloš Forman's childhood was marked by the early loss of his parents. The mother, Anna Formanová, died in 1943 in the Auschwitz concentration camp , the father, Rudolf Forman, in 1944 in the Mittelbau-Dora concentration camp . The boy was an eyewitness to her arrest by the Gestapo . Relatives and friends of his parents raised him. After attending secondary school in Náchod , he went to a boarding school in Poděbrady after the war ; one of his classmates was Václav Havel . There he came into contact with the theater for the first time and was enthusiastic about the films of Charlie Chaplin , Buster Keaton and John Ford .

After the end of World War II, Forman learned that Rudolf Forman was not his biological father. Rather, this was the Prague architect Otto Kohn (1887–1965), who emigrated to Ecuador in June 1939 , the father of the mathematician Joseph John Kohn , who is thus a half-brother of Miloš Forman.

Miloš Forman studied at the FAMU film school in Prague and was one of the leading exponents of the New Wave at the beginning of the 1960s , which developed its own style early on, influenced by cinéma vérité . His first full-length feature film The Black Peter (Černý Petr) , the story of a maladjusted teenager, was a success at several film festivals. The film brought Forman on the one hand criticism from the communist rulers, on the other hand it enabled him to travel to America for the first time. He also worked partly at the Prague cabaret Semafor , where he directed the 1964 film Konkurs . The fire brigade ball (Hoří, má panenko) exercised barely disguised social criticism : the film is about a festival at which everything goes wrong due to the stupid interference of the officials. The film was banned in Czechoslovakia after 1969.

When the Prague Spring was crushed by the invasion of Warsaw Pact troops, Forman was in Paris to negotiate his first American film. His Czech studio claimed he left the country illegally, forcing him to emigrate . Forman went to the United States and became an American citizen in 1975 . Forman initially lived in the Chelsea Hotel in New York City, which is frequented by numerous artists, for almost three years . Since he could not pay rent, the hotel manager Stanley Bard gave him free accommodation. In his new home he made his international breakthrough as a successful film director. To the annoyance of the communist leadership in Czechoslovakia, his first American film Taking Off was the official US entry at the Cannes International Film Festival .

1975 his film One Flew Over the Cuckoo's Nest (One Flew Over the Cuckoo's Nest) , the on Ken Kesey's novel of the same name and on the play by Dale Wasserman was based, with five Oscars awarded, Forman received his first directing Oscar. The film implementation of Peter Shaffer's play Amadeus, also produced by Zaentz, was even more successful . At the 1985 Academy Awards, the film won eight categories, and Forman received its second Director's Oscar. One of his last works, the film drama Goya's Ghosts from 2006, deals with a theme from the life of the Spanish painter Francisco de Goya . This film was also produced by Saul Zaentz.

Forman preferred to make films about maladjusted heroes, mostly artists, who successfully or unsuccessfully resisted society's pressures to conform . Some of these main characters are historical figures ( Wolfgang Amadeus Mozart , Larry Flynt , Andy Kaufman and Francisco de Goya). The always politically conscious Forman explained his preference for characters like this: “We create institutions, governments and schools to help us in life, but after a while every institution tends to stop acting as it should serve, but as if we should serve her. That is the moment when the individual comes into conflict with them. "

In some films Forman took supporting roles, such as in heartburn (heartburn) and the Faith (Keeping the Faith) .

“[Forman] brought over some of the subversiveness that dominated the CSSR in the 1960s , until the Soviet tanks put an end to any obstinacy in August 1968. To this day, Forman's films revolve around people who refuse to submit, who stand against their time. [... Therefore] [...] to this day there are so many moods in each other in the director's films, the comic and the tragic, the grotesque and the firmly political. "

Miloš Forman's first marriage was from 1958 to 1962 with the actress Jana Brejchová . His second marriage to actress Věra Křesadlová in 1964 resulted in twins Matej and Petr Forman , who both work as actors. Both marriages ended in divorce. Since 1999 he was married to his third wife, the writer Martina Zbořilová , with whom he had two other sons, also twins. Most recently he lived in Warren , Connecticut . Miloš Forman died on April 13, 2018 at the age of 86 after a brief illness.

Forman is one of only four directors who managed to make two films that won an Oscar for Best Picture. ( One flew over the cuckoo's nest and Amadeus ). The other directors are Clint Eastwood , Francis Ford Coppola and Frank Capra .